*An additional $4,000 was awarded for posting their full code solution in an open source repository.

Team DPSyn used the NIST Collaboration Space as their open source repository and can be accessed here. *Note that other contestant source code may also be found on this site.

Tianhao Wang is a fifth-year Ph.D. student in computer science at Purdue University, advised by Professor Ninghui Li. He received a Bachelor of Engineering degree from software school, Fudan University, in 2015. His research interests include differential privacy and local differential privacy. He is a recipient of the Bilsland Dissertation Fellowship and the Email Stefanov Memorial Fellowship.

Zhikun Zhang is a fifth-year candidate in Zejiang University. From October 2017 to May 2019, he was a visiting student at Purdue University, supervised by Professor Ninghui Li. He received his Bachelor degree from Shandong University in 2014. He is a recipient of the National Scholarship for Excellent Ph.D. Students. His research interests include mechanism design, differential privacy and its applications in marginal release, location privacy, machine learning, and crowdsensing systems. 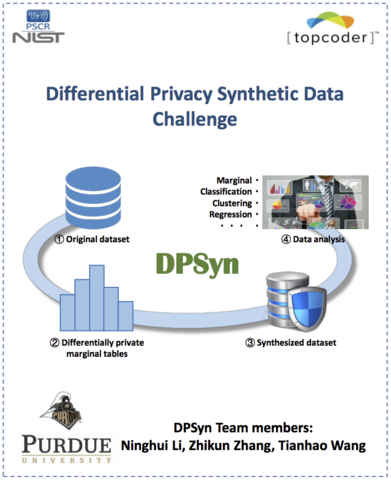 Their algorithm builds on their previous work PriView (published at SIGMOD'14). The synthetic dataset has similar low-degree marginals to the original dataset. Each marginal is specified by a subset of attributes, and can be viewed as a projection from the full contingency table to those attributes. Given a dataset as input, the algorithm has four steps.