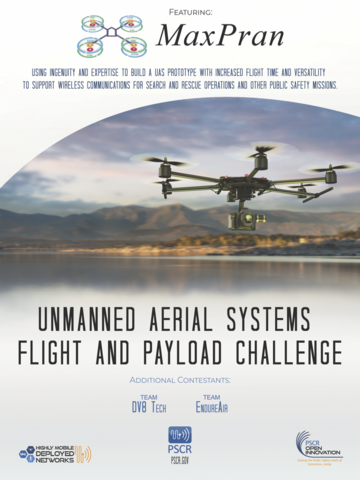 MaxPran is a New Jersey based company and is an offshoot of Faunce Engineering focusing on engineering, designing, and building of Unmanned Aerial Systems (UAS).

Jim Faunce, P.E. is the project lead for the MaxPran team. He is also the principal engineer at Faunce Engineering where he developed UAS for Anti-Poaching in South Africa. Jim is experienced in design, build, and delivery of Aerospace products to the US Army, Navy, Air Force, NASA & Israeli Air Force. Jim has provided technical assistance to the C4ISR Army SIBIR program. Jim earned both his BSME and BSEE from the University of Delaware and is a registered engineer in Delaware and New Jersey.

Matt Koestner is an EE with 20+ years of experience in electronic integration and radio control. Matt is a Part 107 FAA UAS pilot. Previously, he was the Chief Technical Officer at UAV America, a New Hampshire business providing custom UAS'. His current focus is on imaging systems and onboard computing, along with UAV propulsion system ESC/BLDC/propeller testing and hybrid (tailsitter) rotary/fixed wing UA development. Matt earned his BSEE at the University of Central Florida.

Tanway Sawant is an ME with a high level of software acumen, plus analytic and problem solving skills. He is currently a DoD civilian employee working as a Computer Software Engineer for DCMA. As part of Faunce Engineering, he has assisted in developing UAS for game surveying and anti-poaching in South Africa. At Ragnarok Industries, he designed and developed equipment for NASA's CubeSat Challenge. Tanway earned his BSME from the Department of Mechanical and Aerospace Engineering at Rutgers University.

Ben Faunce is a field service technician and welder at Marshal Industrial Technologies in Trenton, NJ. He also works at Faunce Engineering and assisted in the build, deployment and operation of the anti-poaching UAS in South Africa.

MaxPran's Long Endurance C2 X8 UAS is designed to be used by First Responders for reliable Command and Control (C2). MaxPran's experience, skills and facilities developed over years of R&D in the energy, aerospace and UAS industry has allowed them to design, build and optimize an X8 multi-coptor providing a maximum performance for Group 2 UAS. The LE C2 X2 has a modular design enabling them to swap components with advancing technologies as well as the ability to easily breakdown the system for troubleshooting, as necessary.

For PSCR's UAS Challenge, the LE C2 X8 went through initial individual testing of propulsion systems (motors, ESCs and propellers) on MaxPran's test-stand along with extensive flight testing and dynamic tuning with their prototype frame. The UAS met MaxPran's goal for the propulsion system power by using 217 watts for 6.88lb of thrust (8 motors totaling 55lb thrust). This converts to 14.4 grams of thrust per watt.

MaxPran achieved their goal of propulsion system efficiency prior to the Challenge and were confident their UAS met the goals of the public safety mission. Some of the significant factors they improved upon for the final contest were modification and optimization of the gas generator, improvement to the original kill switch implementation, and use of a modular frame design allowing for quick interchange of parts and subsystem and troubleshooting.

The modular design of the LE C2 X8 allowed the operator to choose between batteries for gasoline for fuel. The UAV is designed to fly with hybrid power (gas generator charging batteries) or just batteries. At the time of the Challenge, the gas generator underwent several weeks of tuning and field testing before it was ready for public demonstration at the final contest.

A few of the lessons we learned during this challenge were: 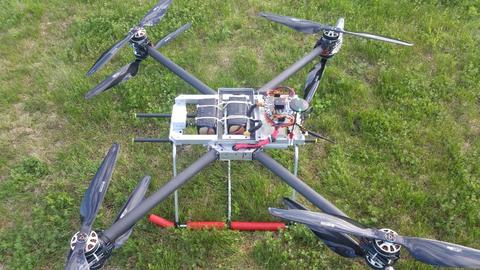