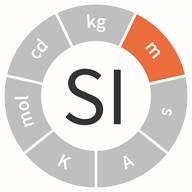 The meter (m) is defined by taking the fixed numerical value of the speed of light in vacuum c to be 299,792,458 when expressed in the unit m s−1, where the second is defined in terms of ∆νCs.

The meter was once defined by a physical artifact - two marks inscribed on a platinum-iridium bar. The Length - Evolution from Measurement Standard to a Fundamental Constant explains the evolution of the definition of the meter. Follow these changes over time in the NIST Length Timeline.

From the meter, several other units of measure are derived such as the:

FAQ: When did the metric redefinition of the inch occur?

In 1958, a conference of English-speaking nations agreed to unify their standards of length and mass, and define them in terms of metric measures. The American yard was shortened and the imperial yard was lengthened as a result. The new conversion factors were announced in 1959 in Federal Register Notice 59-5442 (June 30, 1959), which states the definition of a standard inch: The value for the inch, derived from the value of the Yard effective July 1, 1959, is exactly equivalent to 25.4 mm.

The conversion factor can be determined:

FAQ: How do I get a metric ruler?

Metric rulers are available from many retail vendors, which can be identified by using search terms such as "metric rule," "meter stick," or "metric stick." Printable rulers, such as the centimeter Color-square rules, can be color printed on to overhead transparency sheets to make inexpensive metric rulers.

This comic book-style video animation series has been developed to help middle school students learn about the 7 SI base measurement units. With his sharp eyes and stretchy ruler arms, no distance is too big or small for Meter Man to measure. A meter is the distance light travels in a tiny fraction of a second.