Whether they’re made of leather or metal, people have been using tape measures for a long time. The first spring-loaded metal tape measure was invented and patented in England in 1829. Alvin Fellows of New Haven, Conn., made improvements to that design, including the locking mechanism that stops the tape from retracting until you want it to, and received a patent on July 14, 1868, a date that is now celebrated by tape measure enthusiasts like myself as National Tape Measure Day.

Tape measures are indispensable tools. We use them to build houses, to tailor clothes and to ensure fairness in trade and sports, pretty much any situation where we need to know the length of something. Many years ago as a high-school football running back, I cared about every yard I could gain; my dreams of playing in college, and with any luck the NFL, depended on it. First downs and touchdowns are determined by precisely marked yard lines and often decided by mere inches, so it was important to me and my teammates that the referees’ measurements were accurate. I went on to play college football at Towson University, but pursuing a rigorous academic degree while playing football was beyond my ability. After getting a degree in business administration and completing my college football career, I enrolled in University of Maryland to study mechanical engineering and went on to get a master’s at The Johns Hopkins University. Anyway, length is still a big part of my life these days, but the units are meters, which is the international unit for length. As leader of the Dimensional Metrology Group at NIST, one of my jobs is to ensure the accuracy of tape measures. In 2011, my group calibrated the tape that was used to measure the length of the 2012 Olympic marathon in London. This is important because the winners of this event are decided based solely on how fast they can complete a course of known length. In addition to being featured on the front of a box of breakfast cereal and the pride that comes from performing better than the competition, athletes who win medals and set world records can reap significant benefits, including lucrative endorsement deals. With so much riding on winning, it’s easy to see why you would want the length of the course to be as accurate as possible.

One of the most important functions of tape measures, and one you may find surprising, is to ensure fairness in millions of dollars’ worth of oil transactions that take place throughout the U.S. every year. Oil distributors use a special measuring tape called an oil gauging tape to check the level of those very large tanks of oil you see along the highway or at seaports. Just like you might use a dipstick to check the level of oil in your car, distributors dip these tapes into their tanks, some of which are 80 meters in diameter and can hold 100,000 cubic meters of oil, to measure the volume before and after the oil is dispersed into an oil tanker or other transfer vessel. The difference between the levels is used to determine the number of barrels transferred and the cost of the transaction. 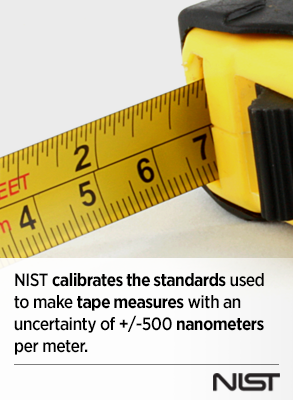 In this business, inaccurate tape measures can cost the distributor or customer hundreds of thousands of dollars in losses, so being accurate is really important. Many of these distributors send their tapes to NIST to have their accuracy checked against our high accuracy reference laser measuring system, which is among the most accurate tape measuring systems in the world. Using this system, we can measure a meter with an uncertainty of +/-300 nanometers, or 3 parts in 107. Just for some perspective, a human hair is anywhere from 80,000 to 187,000 nanometers in diameter. Although NIST calibrates oil gauging tapes and special tapes that are used for events like the Olympics, we don’t calibrate every tape measure that you find in your local hardware store. The accuracy of most of those tapes are still traceable to NIST labs, though. That’s because many of the manufacturers of tape measures send their master length standards to NIST for calibration. They use their NIST-calibrated masters to make the tens of millions of tapes that are bought and sold throughout the world every year.

Of course, because you lose accuracy when you transfer measurements from one tape to another, tape measure manufacturers want their master standards to be as accurate as possible. If we’re working with a tape that has very clean, very sharp graduation markings, like one of these master length standards have, we can calibrate them with an uncertainty of about 5 parts in 107, or +/-500 nanometers per meter. The tape measures themselves are manufactured with varying degrees of quality, but as per NIST Handbook 44 (PDF), a six-foot-long tape used for commerce must be accurate to within 1/32 of an inch. As anyone who’s ever tried to build anything knows, our friend the humble tape measure is a useful tool. We use it to ensure fairness in trade and allow people to produce and purchase all kinds of important products every day. A tape measure is a lot like I like to think I was during my years on the football field: small, powerful and effective. Unlike me, though, a tape measure won’t knock you down if you get in its way.

Dan Sawyer is the leader of and a mechanical engineer in NIST's Dimensional Metrology group. In his spare time, Dan enjoys building model airplanes and playing the piano.

A lot has changed at the National Institute of Standards and Technology (NIST) in the past 120 years. For one thing, we were known as the National Bureau of

Across the National Institute of Standards and Technology (NIST), internships are a very important experience for students and staff members alike. But for most

I bet that is an awesome job!!! I enjoy the accuracy of my tape measures due your dedication to accuracy and the dedication of those you work with. Thank you.

I appreciate your discussion on measurement accuracy. I am more of a TLAR person but its good to know measurement tools are accurate when needed.