As part of the modernization of the thermal neutron spectrometers, a state-of-the-art triple-axis instrument is operational at the BT-7 thermal beam port. The instrument takes full advantage of the large 16 cm diameter beam tube, with 20×20 cm2 double focusing monochromators. Two monochromators are available, a pyrolytic graphite monochromator and Cu(220). The analyzer system also provides horizontal focusing capability, and together these new capabilities provide signals that are two orders-of-magnitude larger than available with the original thermal triple-axis instruments.  The analyzer system can also be used as the crystal array coupled with a position-sensitive detector in various configurations to allow the simultaneous collection of data over a range of (Q,E).  A schematic of the spectrometer is shown in Fig. 1. 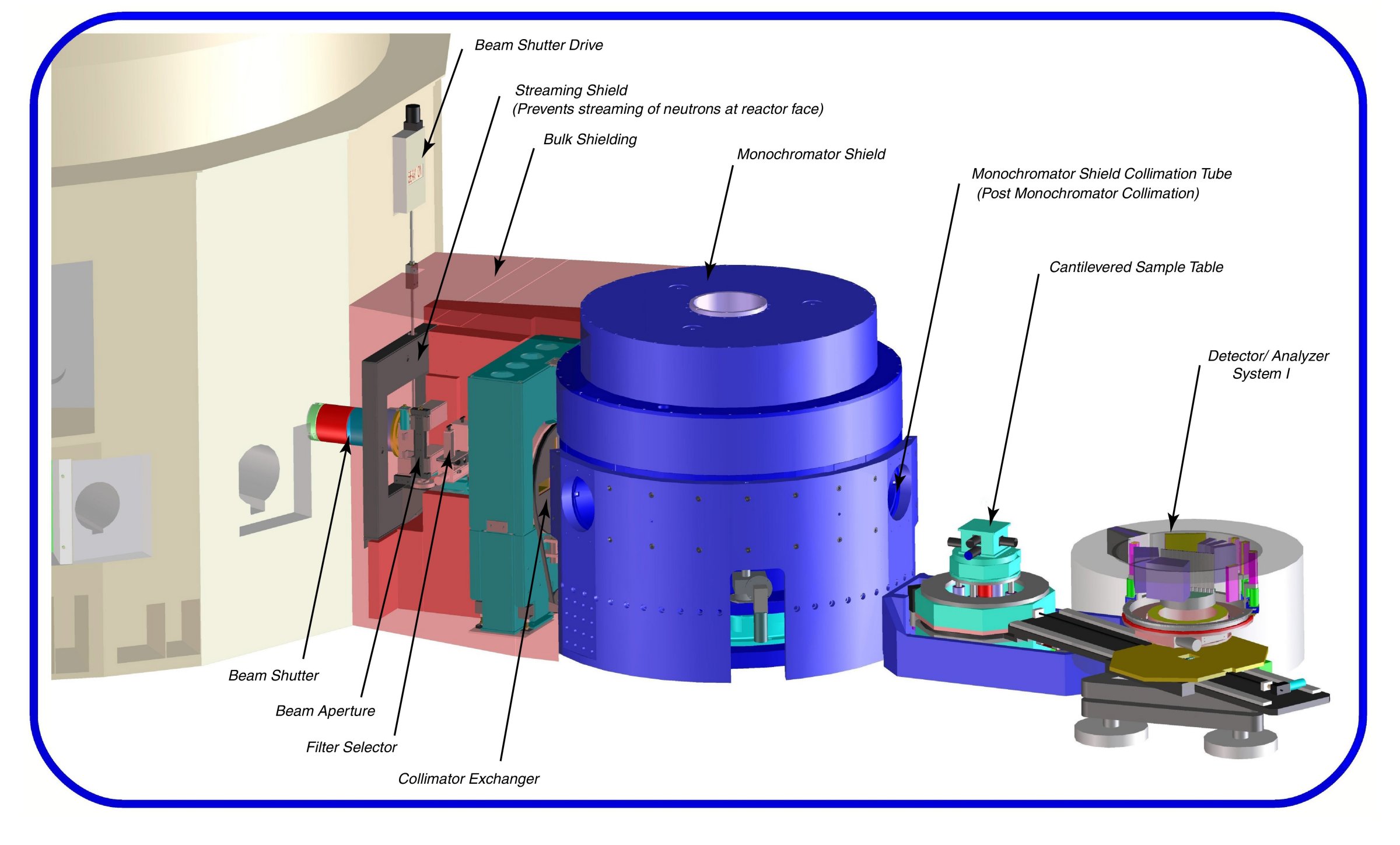 Figure 1.  Cut-away layout of the new instrument.  The size of the beam exiting from the source can be varied by a set of motorized slits, and can be passed through a PG filter, and/or velocity selector, and a system with a selection of horizontal collimations, before striking the double-focusing monochromator.  The monochromatic beam impinges on the sample table that is cantilevered from the monochromator drum.  The analyzer system is on air pads.

The overall dimensions of the instrument are:

On the new thermal instruments, the experimental beam shutter is contained within the biological shield of the source, and simply has two positions, open and closed.  Outside the in-pile reactor shutter, all the thermal beam holes are (nominally) identical.  The beam shutter opening is 6.4 cm wide at the exit, opening to 9 cm on the end toward the source.  The vertical opening is 16 cm.  The shutter opens or closes in about eleven seconds.

The next element is the variable apertures to reduce the size of the beam from 6.4x16 cm2 to a smaller size when needed.  The blades are composed of compressed lithium fluoride on the surface toward the source, with a 10 cm thick aluminum frame holder behind this filled with B4C.  We did not use any gamma shielding (such as lead to tungsten) on these blades, which greatly reduces the load on the translation system.

The next element is the filter, which is a pyrolytic graphite (PG) filter.  This filter can be translated in or out of the beam.

The next element is the velocity selector, which can be used to suppress higher order wavelength neutrons.  There is a window at 5 meV where this can be used, or from 11.5 meV to 60 meV.  This rotation is computer controlled to follow the incident energy, and the system can be translated in or out of the beam as needed.  Overall background is also greatly reduced, similar to inserting the PG filter in the reactor beam but the selector works over a continuous range of energies.

The rotating collimator-exchange system has three Söller-slit collimations, 10', 25', and 50', along with an 8.9 cm wide Open position for maximum intensity and for horizontal energy focusing.

The monochromator drum is 213 cm in diameter, with a 40.6 cm inner diameter to accommodate the separate monochromator systems.  The angular range of the drum is from the straight-through position (for optical alignment purposes) to 115 degrees scattering angle.  The practical angular range is from the smallest angle possible due to radiation considerations (~16°), to the largest angle possible given the geometrical constraints imposed by interference with other instruments and facilities.  This is 75° on BT-7.

There are three additional components that have been designed for the monochromator drum.  One is the stationary "pipe" that goes from the edge of the drum on the source side, to the center post. This is an essential piece of shielding, as it determines to a substantial extent the lowest achievable drum angle that can be used on the working instrument.  It also contains a vertical magnetic field for polarized neutrons if a white-beam polarizer (such as  3He) becomes available for the reactor beam.  The size of the neutron beam onto the monochromator is 20 cm high 11 cm wide.  The drum design itself can accommodate a beam considerably wider than 11 cm, and this allows for substantial neutron and gamma shielding here.

The third component is the beam optics for the monochromatic beam to the sample.  This has the following capabilities:

d)      Horizontal beam focusing.  Without collimators, there is an option where the beam is converging horizontally (and vertically, of course) onto the sample, with a maximum sample size of 2.5 cm 5 cm high.  This is a "pie-shaped" tungsten shielding plug and mask in order to achieve the desirable low instrumental background.  Changes in collimation can be accomplished without the need to remove the sample and environmental system from the sample position.

e)      Beam limiters.  At least two pairs, one on the monochromator side and one on the sample side.  These move symmetrically about the nominal beam center both horizontally and vertically.

g)      In the case of polarized beam operation.  He3 polarizers before and after the sample are available.

h)      Room for other options, such as an extra PG filter, or cold Be filter after the sample, are available.

The sample table has a horizontal angular motion (rotation), and a second concentric horizontal motion is available to allow the independent rotation of a (horizontal field) magnet.  The goniometer with x-y tilts and x-y translations is mounted on an elevator, which has a vertical travel of +2.5 cm above the standard height of 15.25 cm, and 7.5 cm below.  The goniometer is removed and the sample system moved to the full down position to accommodate the 15 Tesla magnet.

With the exception of the incident beam and the analyzer/detector system, the sample is surrounded by neutron absorbing sample enclosure to reduce experimental background.  There is a beam stop following the sample to "catch" the neutron and gamma beam transmitted by the sample.  This is retractable to allow for low-angle operation of the analyzer system.

For the analyzer portion of this machine several different types of systems have been proposed.  Each system attaches to the 2θ arm of the sample table through a hinge mechanism, which allows modest vertical displacements while providing the lateral rigidity necessary to assure the proper angular precision.  The connection is designed in a "quick" coupling modular fashion so that other analyzer/detector systems can be accommodated and quickly interchanged. To achieve this rapid interchangeability, the detector electronics and motor command movements are integrated into each analyzer unit so that the only connections are power, a communications cable, and compressed air.  The unit moves along the floor on an air-pad suspension to accommodate the weight and varied footprint of the sample-analyzer distance. The floor is a poured epoxy base covered by aluminum plates welded together.

The current analyzer system installed on BT-7 is a horizontally focused pyrolytic graphite analyzer system as shown in Fig. 2.  This is the only analyzer system presently available.  The analyzer crystal system consists of 13 pyrolytic graphite elements, each 2 cm wide and 15 cm high, with an individual detector where the 13 blades of the analyzer focus, or a position-sensitive detector, at the operator's choice.  The blades of the analyzer can be freely rotated by 360 degrees and individually positioned, while the entire unit can be rotated as a whole to achieve the focusing condition.  A straight-through series of 11 detectors are incorporated into the shielding behind the analyzer crystals to continuously monitor the flux of neutrons entering the analyzer system.  A separate diffraction detector is also provided, which can be moved in front of the analyzer if the energy-integrated signal is to be measured, for Bragg peak intensity measurements, and for alignment purposes.  The general design philosophy is to make the instrument as user friendly as possible while still meeting all the desired operating criteria, which includes various beam defining equipment such as collimators, beam apertures, 3He polarizer cell, and filters.  Conventional and radial collimators between the analyzer array and detectors are included within the analyzer system and are under computer control, eliminating the need to change collimation inside by hand.  Currently there is a 80´ FWHM radial collimator, Söller collimators of 25´, 50´, 120´, and an open position.  Collimations between the sample and analyzer are changed manually from outside the analyzer system.

A second proposed type of analyzer system consists of a series of 30 individual and isolated analyzer/detector systems. For the thermal triple-axis instruments each analyzer/detector would be limited to 75° for the detector.  This style of analyzer has been adopted for the MACS double-focusing cold triple axis instrument, but there it employs a double-crystal system for each detector in order to accommodate higher detector scattering angles needed for cold neutrons.  Other analyzer options, to be developed in the future, include incorporating a velocity selector into the analyzer system, and developing a "conventional" double-focusing analyzer with a single, well-shielded detector and interchangeable analyzer crystal systems..