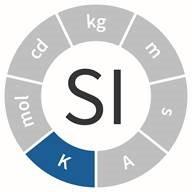 The kelvin (K) is defined by taking the fixed numerical value of the Boltzmann constant k to be 1.380 649 ×10−23 when expressed in the unit J K−1, which is equal to kg m2 s−2 K−1, where the kilogram, meter and second are defined in terms of h, c and ∆νCs. The temperature 0 K is commonly referred to as "absolute zero." On the widely used Celsius temperature scale, water freezes at 0 °C and boils at about 100 °C. One Celsius degree is an interval of 1 K, and zero degrees Celsius is 273.15 K. An interval of one Celsius degree corresponds to an interval of 1.8 Fahrenheit degrees on the Fahrenheit temperature scale. 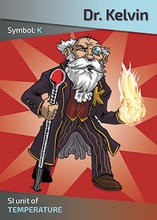 This comic book-style video animation series has been developed to help middle school students learn about the 7 SI base measurement units. With the ability to speed up or slow down particles, Dr. Kelvin can measure any temperature. The kelvin temperature scale begins at absolute zero, the coldest possible temperature and the point at which even atoms would stand perfectly still.