Modern science and technology demand the highest possible accuracy in the measurement of light, including the intensity of solar irradiance in space; optical power, ranging from high-energy laser output to signals in fiber-optic circuits; and the detection, counting, and manipulation of single photons. NIST-on-a-Chip (NoaC) research is addressing each of those challenges by developing novel, miniaturized devices whose performance is often based on quantum phenomena.

Multiple NoaC teams are creating and testing chip-scale bolometers for a variety of uses, including measuring solar irradiance. In collaboration with the University of Colorado Laboratory for Atmospheric and Space Physics (LASP) an Instrument Incubator Program technology demonstration funded by NASA for chip-based solar spectral irradiance bolometers has been completed and an Advanced Component Technology development effort for a total solar irradiance bolometer is underway.

Both efforts have resulted in designs for CubeSat-based measurements of solar irradiance. In addition, a chip-based replacement for existing, aging, and slow C-series radiometric standards (~ 0.4 – 2 µm, comprising normal telecom range) for continuous-wave visible and near-infrared lasers is being developed for NIST and for the Air-Force Metrology Lab.

For LASP’s work on spectral irradiance measurements from a CubeSat platform, NoaC is providing high-accuracy electrical substitution radiometer chips based on vertically-aligned carbon nanotubes (VACNTs). This is the nascent realization of what might be called NIST on a Spaceship. NIST is also developing technology for total solar irradiance measurements based on large-area, large-irradiance (100 mW/cm2) carbon nanotube-based radiometer chips. This work differs considerably from other ongoing NoaC radiometer projects because the chips will operate at “room temperature” (not cryogenic) in space. These absolute radiometers are slated for launch in 2018.

Related NoaC programs focus on fiber-optic power metrology – measuring both absolute power and losses in transmission – which is essential to building and maintaining state-of-the-art optical networks. At present, measurements made with traceable instruments often have uncertainties in the range of a few percent – a number that NIST is committed to reducing.

This system operates around 4°K in a small robust mechanical cryostat. The planar design allows fabrication with industry-standard lithographic methods. System characterization is underway. A second system is under construction in collaboration with Centro Nacional De Metrologia (CENAM) in Mexico and will reside at CENAM. 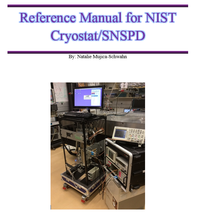 NIST is the first organization worldwide to have a traceable, portable, absolute, single-photon measurement system. The technology supports telecommunications, quantum computing, and other quantum measurements.

NoaC researchers are participating in an international pilot intercomparison for measuring the detection efficiency of single-photon detectors. In the first phase, NIST measured two free-space coupled silicon avalanche photodiodes and determined their efficiency. The measurement is based on a simple beam-splitter method, where an attenuator is used to reduce absolute power to a point that is compatible with photon-counting detectors. NIST scientists have implemented a fiber-coupled and a free-space measurement system. In both cases, the measured detection efficiency has an extended relative uncertainty of less than 1 %. Ultimately this work will serve to establish a calibration measurement capability at NIST for single-photon detector efficiencies.

The system traveled to Canada in 2016 and will continue traveling as part of the Consultative Committee for Photometry and Radiometry comparison among multiple national metrology institutes.

An important goal of modern quantum optics research is the development of scalable processing of quantum information. Because any material system that supports quantum information processing generally has a narrow optimization range of its physical properties specific to that material, one can expect that it will be necessary to convert one frequency to another while maintaining the fidelity of the quantum state. Therefore, coherent frequency conversion is an essential enabling tool for realizing scalable quantum systems. In pursuit of this goal, parametric frequency conversion is being actively researched.

A significant issue with parametric upconverters however, is spontaneous generation of background photons in the output channel due to the strong pump necessary to achieve high-efficiency frequency conversion. NoaC has developed a highly efficient integrated upconverter that generates just ≈100 background photons per hour, comparable to the photon flux of the dimmest continuous sources of visible/NIR light reported (astrophysical objects of 30 AB magnitude or lower).

NoaC researchers also introduced an alternative approach based on control of optical waveguides that connect nodes to one another. The method readily lends itself to integrated quantum circuits, because the Kerr nonlinearity is a natural property of all solids. Using isolated node manipulations and the controlled photon exchange between nodes, we have developed scalable and robust protocols for basic quantum gates using simple, two-level systems as nodes.

A new single-photon source based on semiconductor quantum dots produces the brightest output yet and can be integrated into complicated quantum photonic chips. NoaC scientists have integrated these sources into waveguide and waveguide-coupled cavities for metrology and other quantum photonics applications. These devices can offer robust on-chip calibration of single photon properties. The platform is flexible, allowing for in-plane and off-chip architectures.

NOTE: Any mention or depiction of commercial products within NIST web pages is for information only; it does not imply recommendation or endorsement by NIST.