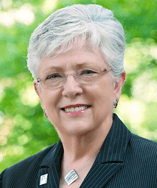 Carolyn Cason, professor emerita at the University of Texas at Arlington, has had a distinguished career as a scientist, teacher, academic leader and innovator. She began her professional career as a critical care nurse and has held university teaching appointments for over 35 years. She joined the University of Texas at Arlington in 1997 as professor and associate dean for research in the College of Nursing and served as the university’s vice president for research from 2010-2015. She envisioned and built the nation’s first comprehensive healthcare simulation research and development center, the Smart Hospital, creating the prototype for the nation. She led the efforts that created Smart Care, a living laboratory dedicated to developing noninvasive, pervasive technology to monitor health changes and support independent living, and the Shimadzu Institute for Research Technologies, a $25 million core facility supporting chemistry, biology, nanotechnology and material science research. In 2014, she was named a charter fellow, National Academy of Inventors and in October 2015, she was inducted as a fellow of the American Academy of Nursing. She serves on a number of boards, including the board of Tech Fort Worth, a seed incubator/accelerator supporting entrepreneurs commercializing innovative technologies.