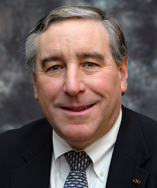 Edward W. (Ned) Hill is Dean, Professor, and Distinguished Scholar of Economic Development at Cleveland State University's Maxine Goodman Levin College of Urban Affairs. He is also a Nonresident Senior Fellow of the Metropolitan Policy Program at The Brookings Institution, a Nonresident Visiting Fellow of the Institute of Government at the University of California at Berkeley, and Adjunct Professor of Public Administration at South China University of Technology. He edited Economic Development Quarterly from 1994 to 2005. Hill is a member of the board of directors of MAGNET, the MEP affiliate organization in Northeast Ohio. Ohio Department of Development Director Christine Schmenk appointed Hill to Ohio's Manufacturing Task Force in 2011 and he has been a member of Ohio's Cooperative Education Advisory Council since 2009. Hill and his team completed a major study of advanced manufacturing for Pennsylvania's Industrial Resource Network Program in 2010. In 2011 and 2012 they advised JobsOhio, Ohio's economic development organization, and Northeast Ohio's economic development network on development strategy in 2011 and 2012. The Ohio Manufactures Association presented Hill with its Legacy Award in 2005.