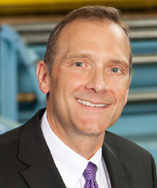 Resigned from the Board March 2019

Joe Eddy is executive vice president at Justrite Safety Group and president/CEO of Eagle Manufacturing. Both companies are leaders for over 100 years in the safe storage, transfer, use and disposal of flammable and hazardous liquids. As executive vice president of Justrite’s North American Chemical Safety business unit, Mr. Eddy is responsible for both Eagle and Justrite’s legacy operations groups. He is past chairman of the West Virginia Manufacturers Association (WVMA), president of the WVMA Educational Fund Board, vice president of the Foundation Board at West Virginia Northern Community College, on the advisory board at the McDonough Center for Leadership and Business at Marietta College, vice president of the Regional Economic Development Partnership Board, on the Federal Reserve Bank of Richmond’s Charleston Industry Roundtable, on the board of the National Association of Manufacturers, on the West Virginia Economic Development Authority Board and founded the Joseph and Debra Eddy Foundation, as well as the Joseph Eddy Technology Fund at West Virginia Northern Community College.