The Quantum Measurement Division (QMD) provides the physical foundation for the International System of Units (Système International d'Unités or SI), colloquially referred to as the metric system.

We achieve this through precision measurements of various fundamental constants, realization of resistance and voltage through the quantum hall effect and Josephson effect respectively, and through our determination of the best values of the fundamental constants done under the auspices of the Task Group on Fundamental Constants of the Committee on Data for Science and Technology (CODATA, an interdisciplinary unit of the Scientific Committee of the International Council for Science).

As part of this effort, NIST is building a new Watt Balance which - prior to the redefinition -will be used to make one final precision measurement of the Planck constant. After the redefinition, it will become the means for the realization of the kilogram in the United States.

The planned redefinition of the SI in 2018 will achieve the goal of turning the SI into a system based on fundamental constants and properties of nature. In fact, the new redefined SI will be largely based on quantum mechanics and its generalizations. including quantum electrodynamics.

As such, the strategy of the QMD is to: 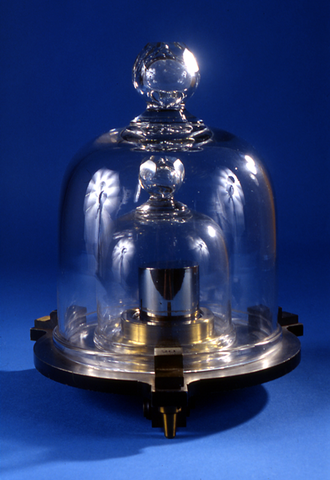 For more than a century, the kilogram (kg) – the fundamental unit of mass in the International System of Units (SI) – has been defined as exactly equal to the mass of a small polished cylinder, cast in 1879 of platinum and iridium, which is kept in a triple-locked vault on the outskirts of Paris.

That object is called the International Prototype of the Kilogram (IPK), and the accuracy of every measurement of mass or weight worldwide, whether in pounds and ounces or milligrams and metric tons, depends on how closely the reference masses used in those measurements can be linked to the mass of the IPK.

That situation is about to change. The world metrology community plans to redefine the kilogram soon, freeing it from its embodiment in one golf-ball-sized artifact at one location, and basing it instead on a constant of nature. That transformation will be as profound as any in the history of measurement.  MORE

Particles can sometimes act like waves, and photons (particles of light) are no exception. Just as waves create an

By cleverly manipulating two properties of a neutron beam, NIST scientists and their collaborators have created a

Look at an astronomical marvel like the Cat’s Eye Nebula at right, with an average gas temperature about twice as hot as

Measuring large forces, such as the thrust of a rocket engine or the deflection of an aircraft wing, requires well-calibrated force sensors. NIST’s unique

Collisions and reactions between atoms and molecules are fundamental to many parts of physics and chemistry. They control, for example, the rate at which gasses

Theory is being developed and used to devise methods for preserving and exploiting the quantum behavior of ever-larger systems for metrology, communication, and
The NTEP program is administered through the National Conference on Weights and Measures (NCWM).

This project allows investigators to build their own data acquisition instruments to collect and statistically process data in real time, then send the results
NOTE: THIS PAGE REFERS TO THE ORIGINAL VERSION OF THIS PROJECT. THE NEWEST VERSION, DATED JANUARY 2015, CAN BE FOUND HERE.This first (and slightly buggy)

Recognizing the world's most influential researchers of the past decade, demonstrated by the production of multiple highly-cited papers that...

Optical Society of America (OSA) members who have served with distinction in the advancement of optics may be proposed for election to the...

The Young Scientist Prize is granted by IUPAP Commissions. Successful candidates will have up to 8 years of research experience following Ph...

Two JQI Fellows will launch the fifth edition of their Coursera class "Exploring Quantum Physics" next week! Free to enroll!

A video about the redefinition of the mole, featuring NIST's Savelas Rabb, Robert Vocke, and Stephan Schlamminger.