Focused beams of ions have a wide range of uses, from nanoscale imaging to the fabrication of nanomaterials. In the CNST, researchers are developing novel cold-atom based ion sources to go beyond the capabilities of existing beam production techniques. This new approach uses photoionization of laser-cooled neutral atoms to produce highly focused ion beams with narrow energy spreads. Project researchers are working with industrial partners to transfer the technology and develop commercial applications using these novel ion sources. 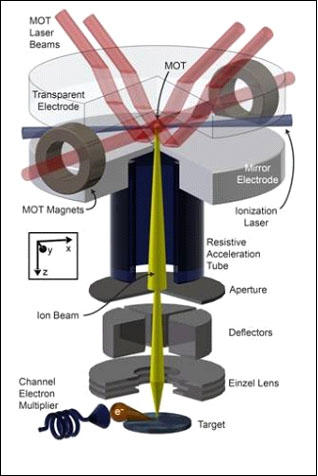 Commercial focused ion beams (FIBs) are used in a wide variety of applications. For example, they serve as diagnostic tools, slicing through a nanodevice to expose its internal structure. They can also shape nanoscale materials either by adding atoms to a structure or by shaving them off. And they can be used in microscopes that create images of nanoscale surfaces. Collectively, tools that use focused ion beams make up a $300 million to $600 million industry.

Although focused-ion beams have been in use since the 1980s, and have become firmly established as a mainstay of nanotechnology, there are a number of aspects of the technology that need improvement. The number of different ionic species that can be produced in a highly-focused beam of sufficient current and stability is relatively limited, and high resolution, nanometer-scale beams are often only available at high energies, in the tens of kiloelectronvolts regime. A vast majority of sources in use today rely on a single technology, with a single ionic species – the liquid metal ion source (LMIS), with gallium. Operating at 30 keV, a gallium LMIS can produce focal spots in the single-digit-nanometer range with picoampere currents. Such beams are useful for milling or FIB-induced deposition, but their resolution has resisted improvement, they cause undesired sample contamination (staining) in some cases, and they are not well suited for imaging because of their destructive power. Gas field ion sources achieve sub- nanometer resolution using helium or neon ions and have excellent imaging performance, but are limited to noble gas species and high beam energies, and are not optimal for milling except in a few special cases.

The usefulness of focused ion beams could be greatly enhanced by access to a wider choice of ionic species, a variety of beam energies (in particular low energies), and higher resolution. Cold atom sources provide a path toward these goals. Building on NIST researcher William D. Phillips' Nobel Prize-winning work using lasers to trap and cool atoms, cold atom sources confine neutral atoms captured from a vapor and cool them to temperatures just hundreds of millionths of a degree above absolute zero. An additional laser then removes single electrons from the atoms to create ions that can be accelerated and focused into a beam. Project researchers have demonstrated that these beams, because they are produced at extremely low temperatures, have low emittance, meaning that the ions in the beam have very little randomness in their lateral movement. They have also shown that beams with currents of tens of picoamperes or even more are possible. Low emittance combined with high beam current results in a high brightness ion beam, the key to intense, high resolution FIBs. With high brightness, a broad choice of up to 22 different atomic species that can be laser cooled, and the inherent low energy spread of the photoionization process, cold atom ions sources stand to greatly expand the application space of focused ion beams.

Using a magneto-optical trap to capture and cool lithium ions, project researchers have created the first demonstration of a FIB instrument based on a cold atom ion source. Referred to as a MOTIS, the magneto-optical trap ion source is mated to a commercial FIB column provided through a collaboration with FEI Co., a leading nanoscale instrumentation company now part of Thermo Fisher Scientific. Using this FIB as a microscope, the researchers have demonstrated a number of novel imaging modes, taking advantage of the low energy (2 keV) of the ions and an ability to detect both secondary electrons and backscattered ions. The microscope has proven particularly useful for imaging insulating/conducting composites such as carbon nanotube-embedded epoxy, and also for observing elemental contrast via backscattered ion yield. It is also proving useful for nanoscale implantation of lithium ions in battery materials to study ion transport in these technologically important materials. Another application recently demonstrated is the imaging of optical modes in a microdisk resonator. These applications are excellent examples of how a choice of ionic species and an ability to use low energies, enabled by cold atom ion sources, have led to entirely new fields of research.

Working with the startup company zeroK NanoTech, team members have also developed a second-generation cold atom ion source. Referred to as a low-temperature ion source, or LoTIS, the new approach captures and cools atoms in a two-dimensional magneto-optical trap, forming a slow, intense beam of neutral atoms. This beam is further compressed and cooled with lasers and magnetic fields, and then ionized to make an extremely bright ion beam, as much as two orders of magnitude brighter than a MOTIS beam.

Focusing on producing a beam of cesium ions, the first goal of LoTIS development is aimed at helping to solve a crucial problem at the frontier of next generation circuit manufacturing. A key capability provided by FIBs in this industry today is nanoscale integrated circuit editing, in which interconnects within prototype chips are rewired by FIB-enabled milling and metal deposition to test circuit modifications. Because of the inexorable progress toward smaller and smaller features on chips, today's FIBs will not have the resolution to satisfy this need in the next generation of integrated circuits. Combining the extraordinarily high brightness of a LoTIS source with the heavy mass of a cesium ion may provide an answer to this important industrial need.

MOTIS and LoTIS are two examples of sources that utilize cold atoms to enhance the performance and expand the applications of FIBs. As research continues, project scientists expect to develop new approaches, taking advantage of the control provided by laser cooling, that create special opportunities for new applications. For example, cold atom sources are capable of producing single ions on demand, creating dual- species beams, making fast-pulsed ion beams, or generating extremely low energy ion beams. Working with CNST users, researchers plan to explore these and other capabilities to develop new technologies that will help maintain US competitiveness in nanotechnology.