The creation of the first BEC ended up requiring a three-step cooling process.

Second was magnetic trapping, which, when atoms are sufficiently slowed by laser cooling, takes advantage of the fact that the spin of an atom’s electrons makes it act like a tiny bar magnet that is steerable by magnetic fields. The JILA magnetic trap was a more sophisticated version of the first-ever trap to capture neutral atoms, which NIST’s Bill Phillips had developed several years earlier. Atoms in Phillips’ original trap were very loosely packed, but Cornell’s magnetic trap had to compress the atomic haze enough that the third step, evaporative cooling, would have enough rubidium to work with.

Harold Hess of MIT’s hydrogen group had laid out the concept for evaporative cooling of trapped atoms in 1986. The general concept was simple enough; indeed, ordinary cups of coffee are evaporative coolers. Evaporative cooling works because the coffee molecules are not all moving the same speed, but move at a range of different speeds. The hottest, highest-energy molecules steam off, leaving behind the colder ones.

It was a different matter to achieve a similar effect in a virtual magnetic cup holding a few thousand rubidium atoms chilled by lasers and then captured by magnets in a vacuum. Cornell and Wieman had to find ways to maximize the “good” collisions that led to overall cooling of the atom cloud, while avoiding the “bad” collisions that caused atoms to stick together and destroyed the trap’s stability. 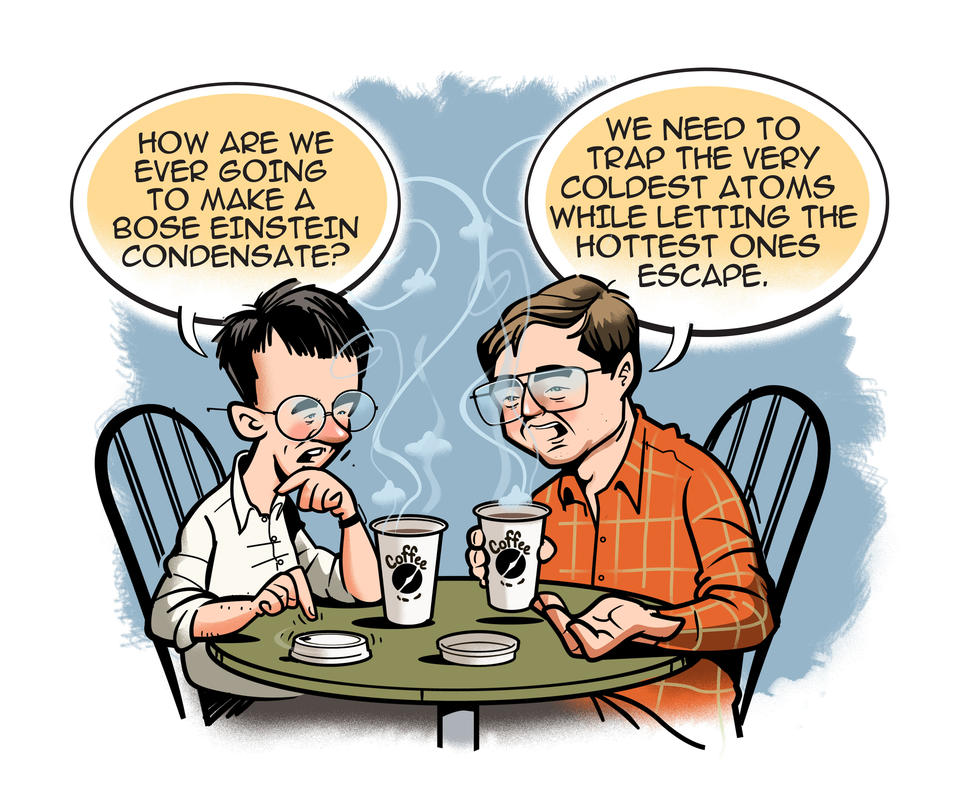 While the researchers’ approach to creating BEC met with early skepticism, their rapid progress during the early 1990s won over many. They contributed to great progress in laser cooling and trapping techniques that were also taking place at MIT, Rice University in Houston, the California Institute of Technology and the École Normale Supérieure in Paris.

“We were worried about them,” Cornell says. “It definitely focused our efforts.”

Earlier input from David Pritchard’s group at MIT had led Wieman and Cornell to an evaporative cooler design that allowed them to lower the edges of the figurative coffee cup over the span of perhaps a minute, allowing progressively cooler—but still too hot—rubidium atoms to escape. It worked well, but not well enough: at temperatures about 200 times hotter than the theorized BEC trigger point (40 microkelvin, compared to the 200 nanokelvin needed to form a rubidium BEC), the atoms found a “hole” in the evaporative-cooling magnetic trap and leaked out.

So Cornell designed an ingenious solution: a similar trap with a second, small magnetic field that moved the inevitable hole in the trap’s magnetic field faster than the atoms could follow. The Time Orbiting Potential (TOP) trap, as Cornell called it, “was the perfect thing to take the existing apparatus and push us over the top. It got us where we needed to be very, very quickly.”

Temperatures plunged, condensing the trapped rubidium gas to perhaps 20 microns across. This was too small for the researchers’ laser-light detector to see. In late May and early June 1995, the team built a magnetic coil, which they called an “antigravity coil,” to hold the atoms aloft briefly after the evaporative cooler was turned off, allowing the cloud to expand in place until the detector could perceive it.

At 10:24 a.m. on June 5, 1995, the apparatus in Cornell’s laboratory chilled a cloud of 2,000 rubidium atoms to 50 nanokelvin, an all-time low. The atoms became one, undulating in a single quantum wave, just as Einstein had predicted.

Cornell and his colleagues didn’t declare victory just yet, however—especially because the sharpness and clearness of the wave they observed seemed, as Cornell put it in his Nobel lecture, “too good to be true.” They carried out tests to make sure they weren’t fooling themselves into seeing what they wanted to see. The crucial piece of evidence was that the condensate took on an elliptical, rather than circular, shape. Though not what Cornell and his team had expected, they realized that the shape fit perfectly with the predictions of quantum mechanics, and eliminated other possible explanations for what they were seeing. By evening they were confident they had achieved their goal.

“Eric was totally outside the box, thinking about totally different areas of physics — I don’t know how he got so smart. He’s [also] the only scientist I know who can inject humor into a talk and pull it off every time. One of the rules of public speaking is, if you have canned joke, don’t use it. Eric does have some canned lines, but he pulls them off every time—I don’t know how he does it. He was a joy to be around.”