The Person Behind the Nobel Prize: Dave Wineland

David J. Wineland was born in Wauwatosa, Wisconsin, on February 24, 1944, two years after his sister Judy. Their father had received an engineering degree from Caltech in 1931, and stress-tested materials and parts for Allis-Chalmers, a machinery manufacturer, during World War II. His mother had an independent career in an insurance company until his sister was born, after which she stayed at home. After the war, the family moved briefly to Denver, Colorado, and then, in 1947, to Sacramento, California, where Wineland and his sister grew up and their father spent the rest of his career.

Growing up near a major Air Force base meant that Wineland and his friends could explore the base’s airplanes, and he developed an early love for mechanics and engines. He also found from an early age that he enjoyed math, and was encouraged by his success with his father’s simple adding and multiplying games. Having grown up during the Great Depression, Wineland’s parents placed a premium on education and job prospects, so he worked hard at keeping his grades up to ensure he would get into a good college.

Wineland took his first physics class as a senior in high school, and liked how many things in the world could be explained by relatively simple mathematics. But his primary passions at the time were cars and motorcycles. He bought his first car at 14, and along with his friends, he spent the year and a half before he was even eligible for a driver’s license taking it apart and fixing it up.

Wineland stayed close to home for his first two years of college, attending the University of California, Davis. In his junior year, he transferred to the California system’s more prestigious Berkeley campus. He was so worried about grades, he says, that he didn’t seek opportunities to do research. Even though he was a physics major, Wineland received his bachelor’s degree without any idea of what experimental physics was like. Despite teaching the hardest course Wineland took in college, his classical mechanics professor, Fredrick Byron, inspired him to apply to Harvard, where he was accepted.

Wineland started graduate school in physics at Harvard in 1965, in a class of 26.

“I remember thinking, uh-oh, 25 geniuses and me!” Wineland said in his Nobel biography. 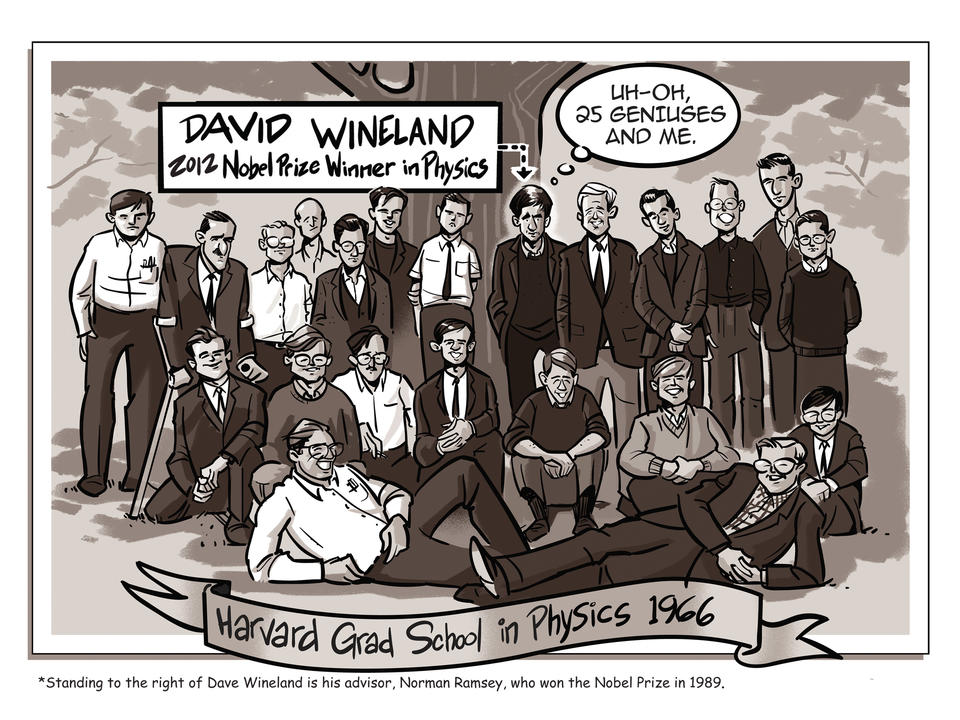 
He quickly discovered that he could keep up, but despite his early enthusiasm for math, he did not excel at the highly abstract thinking needed to work at the frontier of theoretical physics. Luckily, he had the skills he acquired while working with his friends on cars and engines.

“I always liked to do things with my hands, work on mechanical things,” Wineland says. “It was an easy choice to go towards experimental physics.”

Wineland was entering the field at a time when physicists were using powerful new colliders to discover all kinds of never-before-seen particles. He was excited by that kind of research, but also feared being buried in a large research group where his individual contributions might go unnoticed. So instead, he joined the group of atomic physicist Norman Ramsey. In addition to being a renowned physicist who would eventually share the 1989 Nobel Prize in Physics, Ramsey had a reputation for being an exceptionally nice person.

Ramsey, along with his former graduate student and future MIT professor Daniel Kleppner and current student Mark Goldenberg, had recently invented the hydrogen maser. The maser produced microwaves, which, like the visible light of lasers, is a form of electromagnetic radiation. Like all electromagnetic radiation, microwaves and visible light waves consist of regularly repeating peaks and valleys of electric and magnetic fields that travel through space.

Ramsey wanted to use his new invention to make precision measurements of the hydrogen atom, specifically the energy jumps or “transitions” in the electrons that orbit the proton at the core of the hydrogen atom. Electrons in atoms can jump from lower to higher energies, or drop from higher to lower energies. As they do so, they absorb or release visible light or other electromagnetic radiation such as microwaves and radio waves. The radiation’s frequency—the number of wave peaks that travel through a given point each second—depends on the energy difference of the transition. Know the frequencies of the energy transitions and you can map out the population and arrangements of the electrons orbiting the atom.

Ramsey was interested in learning the finest details of electron energy levels in hydrogen, the simplest atom. The energies of electrons can be affected by external electric and magnetic fields and even magnetic interactions with the nucleus of the atom, leading to so-called “hyperfine” energy states. Electrons can make jumps or transitions to and from these hyperfine states.

“On the grand scale of things, it wasn’t a very fundamentally interesting experiment,” Wineland says. “But it was a pretty good training ground for atomic physics techniques.”

Wineland earned his Ph.D. in 1970 and headed to the University of Washington in Seattle for a postdoctoral fellowship with Hans Dehmelt, who became famous for precisely measuring the magnetic properties of electrons. For his pioneering trapping and precision measurement research, Dehmelt would eventually receive the 1989 Nobel Prize in Physics, shared with Wineland’s graduate advisor Ramsey and ion-trap pioneer Wolfgang Paul. Wineland worked on experiments that led to these precise measurements, developing a method to isolate and trap a single electron using electric and magnetic fields.

Beyond learning experimental techniques, Wineland was inspired by Dehmelt’s and Ramsey’s intuitive approaches to physics, which allowed them to reduce seemingly complex problems to their essential elements. He says he has tried to imitate this approach in his own experiments.

After five years in Dehmelt’s lab, Wineland went looking for a university job, but none offered enough funding for the kind of research he wanted to do. So he took a position in Boulder, Colorado, at the Time and Frequency Division of the National Bureau of Standards, or NBS (which in 1988 became the National Institute of Standards and Technology, or NIST). When he arrived, the agency did not have an accurate, operational cesium-atom beam clock that could provide a time standard. He spent his first year and a half working with division colleague David Glaze to calibrate the newest version of the cesium clock, called NBS-6.

“There was pressure to get the thing operating,” Wineland recalls.

Can you help us identify the other riders in this photo, and a more precise time in which this photo was taken? If you have any information, please contact our editor, bstein [at] nist.gov (subject: Wineland%20bike%20photo%20ID) (Ben Stein). Thank you!

“Dave understands an ion in a way that very few people do. He understands quantum jumps, how they make changes between two states. He understands at such a deep level. He has become a master of the ability to control quantum systems in all their exquisite capabilities.”