Radiation therapy with external radiation beams, in which a beam of radiation is aimed at a particular part of the body, is a common type of cancer treatment in the U.S. Hundreds of thousands of people each year receive treatment from 4,000 machines located at 2,200 sites nationwide. The accuracy of all these radiation treatments is traced to national standards developed and maintained by the Radiation Physics Division in Building 245.

To provide the national standards, NIST needed to create sources of radiation and construct the instruments to measure radiation doses while recreating the conditions that medical physicists experience in clinics. At the time of the design and construction of Building 245, the main tool in radiation treatment was the cobalt-60 source, which emits gamma rays. H. William Koch and H.O. Wyckoff designed the new radiation facilities to include two sources of cobalt-60 and another to provide radiation beams from cesium-137, which also emits gamma rays.

Radiation therapy doses are calibrated by measuring the amount of energy absorbed by a kilogram of water. NIST physicist Steve Domen developed a device (a “calorimeter”) to directly measure the heat, which is caused by radiation, absorbed by water inside a “phantom,” an object that stands in for human tissue to make accurate measurements of radiation dose.

By the 1980s, cobalt-60 sources were rapidly being replaced in cancer therapy by higher energy beams provided by electron linear accelerators. These provided doses to the patients either by electron beams or by adding a tungsten target to produce a high voltage X-ray beam. NIST met the growing national measurement need for calibrating these new high energy beams by first acquiring a traveling wave radiofrequency linear accelerator, a device that uses a moving radio wave to accelerate particles, from Yale New Haven Hospital in 1992. That linear accelerator was installed in the Medical-Industrial Radiation Facility (MIRF) at NIST, which has been used for research applications since 1993. 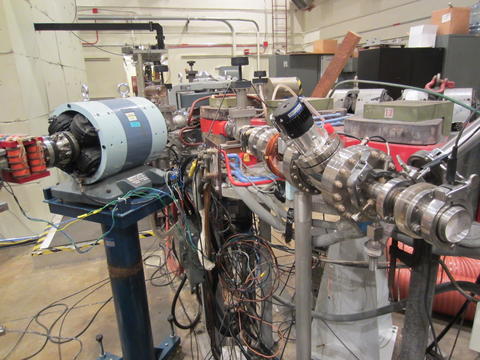 In the 2000s, a second medical accelerator was added that more closely matches the standing wave radiofrequency accelerators used today. This second accelerator has been used with modern calorimeters to measure the water dose for high energy beams. These measurements have permitted NIST to participate in key comparisons of radiation doses delivered by radiotherapy beams with the other national measurement institutes and BIPM, the world’s international measurement organization, to ensure that the doses received by patients are equivalent everywhere in the world.

Under a program established in 1971 by Robert Loevinger, one of the founders of the American Association of Physicists in Medicine (AAPM), NIST established the traceability of three AAPM secondary laboratories that provide calibrations every two years to the 2,200 radiation therapy facilities. This program provides assurance that the clinics across the U.S. can provide accurate radiation doses to patients. NIST currently chairs the subcommittee that provides oversight of the calibration laboratories, and NIST staff participate in audits of the laboratories on a two-year cycle.