The history of NIST's Radiation Physics Building and the people and work that inhabit it.

On the Gaithersburg, Maryland, grounds of the National Institute of Standards and Technology (NIST) is a three-story building that looks like many others on campus. Yet this building has a special history and importance to NIST — and the entire nation. The Radiation Physics Building, simply called “Building 245” by many on campus, houses four laboratory groups. Three of them make up NIST’s Radiation Physics Division, and the fourth, the Ultraviolet Radiation Group, is part of NIST’s Sensor Science Division; all are units of NIST’s Physical Measurement Laboratory (PML). 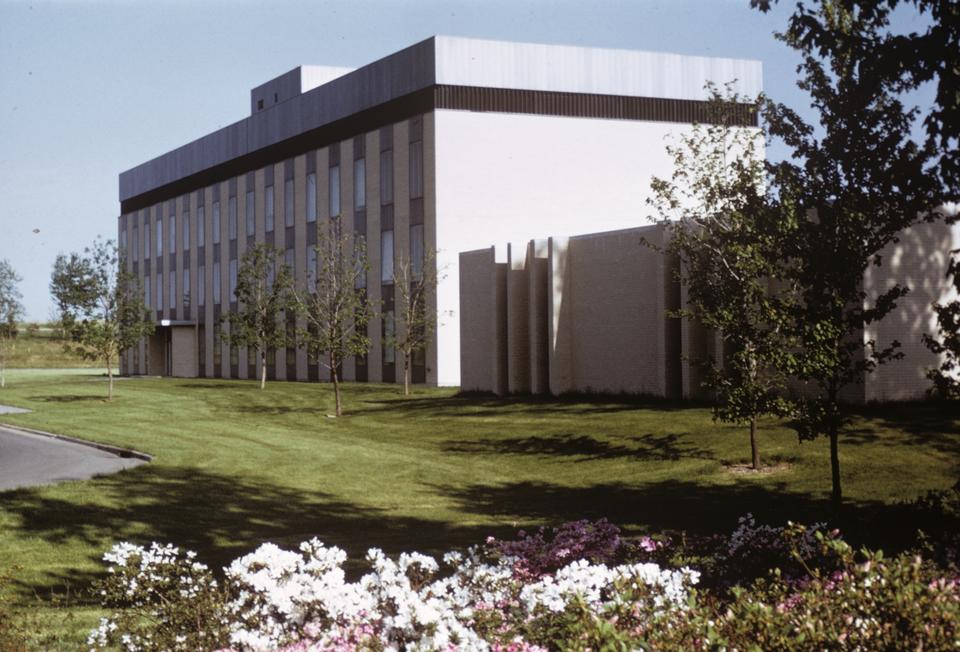 As part of NIST, these groups perform fundamental research in measurement science and provide critical, unique radiation sources, services and data for academia and U.S. industry. Their work is vital to advancing health care, strengthening national security, safely producing nuclear energy and much more. Through its resources and expertise, NIST provides national measurement standards to everyone in the country through an unbroken chain of measurements.

The Radiation Physics Division’s research involves all types of ionizing radiation, from the extreme ultraviolet and X-rays to gamma rays. The division leads and coordinates the national measurement system for radiation by furnishing accurate, uniform techniques and standards for measuring radiation and its interaction with matter.

NIST’s scientists and engineers work with radiation from X- and gamma-ray sources, particle accelerators, and radioactive atoms at energies from 1,000 to 380 million electron volts (1 keV to 380 MeV). In this range, which includes radiation used most extensively in industrial, medical and research applications, they investigate, develop and improve radiation sources and standards; develop improved techniques and instruments for detecting and measuring radiation; and obtain basic data on the interactions of radiation with nuclei, atoms, molecules and bulk matter.

Today’s broad program is the direct outgrowth of the work of an Atomic and Radiation Physics Division established by the National Bureau of Standards (NBS, now NIST) in 1927. For several decades, this division’s efforts focused on problems arising from the early medical and industrial applications of X-rays, devoting particular attention to methods for physically measuring X-rays and solutions for problems in radiation safety. With the advent of nuclear power, demands on the group increased rapidly, especially in the area of high-energy electron sources, which can also generate X-rays.

In the 1960s, NIST moved its Washington, D.C., laboratories to new facilities in Gaithersburg, Maryland.

This enabled the Atomic and Radiation Physics Division to procure a "second generation" of machines that broadened its capabilities and allowed higher intensity photon, electron and neutron sources and more precise measurements of ionizing radiation and radioactivity.

In 2017, NIST broke ground for a much-anticipated modernization of Building 245. The original 1964 building will be updated with more than 7,100 square meters (77,000 square feet) of additional floor space and improved environmental controls and safety features to continue NIST’s innovative work and address national needs. The first of two new wings — Wing H — is slated to open in the fall of 2019.

In 2018, NIST entered an agreement with the Maryland Historical Trust to preserve key aspects of the history of Building 245. As part of our agreement, we have created this website to share many aspects of its history with the public.

This website provides a historical overview of the Building 245 facilities, people and research that contributed to the U.S. tradition of world-leading scientific research and made possible advances that have improved our society and quality of life. We hope you enjoy reading it as much as we did putting it together.

NIST Colloquium Series: Radiation Physics at NBS/NIST - A Half Century of Metrology in NIST Building 245