Time and Frequency from A to Z, Ti

An oscillator found inside an electronic instrument that serves as a reference for all of the time and frequency functions performed by that instrument. The time base oscillator in most instruments is a quartz oscillator, often an OCXO. However, some instruments now use rubidium oscillators as their time base.

A code (usually digital) that contains enough information to synchronize a clock to the correct time-of-day. Most time codes contain the UTC hour, minute, and second; the month, day, and year; and advance warning of daylight saving time and leap seconds. NIST time codes can be obtained from WWV, WWVH, WWVB, ACTS, and the Internet Time Service, and other systems such as GPS have their own unique time codes. The format of the WWV/WWVH time code is shown in the graphic. 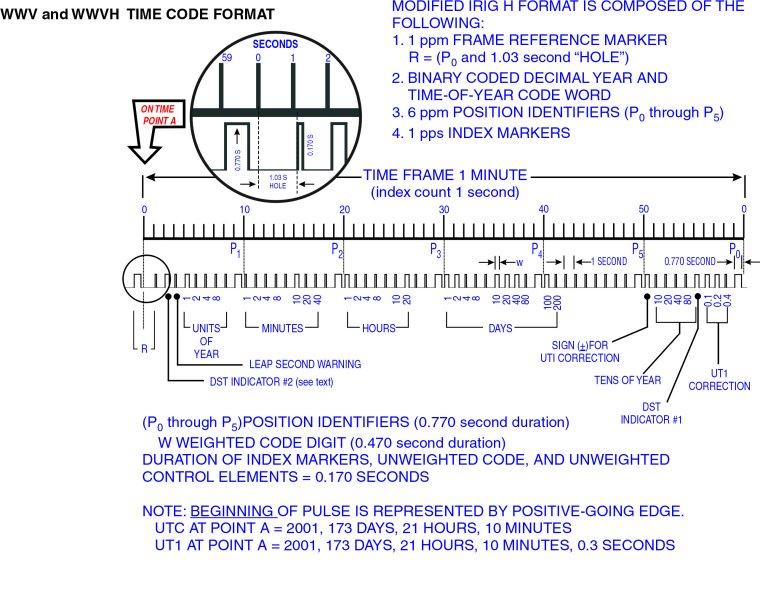 A statistic used to estimate time stability, based on the Modified Allan deviation. The time deviation is particularly useful for analyzing time transfer data, such as the results of a GPS common-view measurement.

The measurement domain where voltage and power are measured as functions of time. Instruments such as oscilloscopes and time interval counters are often used to analyze signals in the time domain. 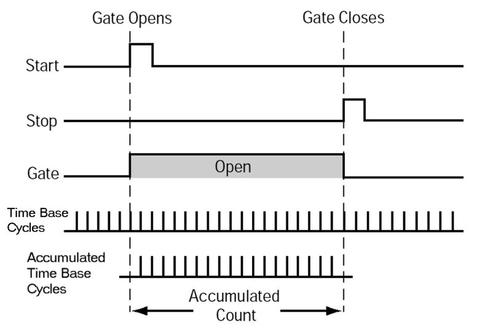 The most important specification of a TIC is resolution. In simple TIC designs, such as the one in the illustration, the resolution is limited to the period of the TIC’s time base frequency.  For example, a TIC with a 10 MHz time base would be limited to a resolution of 100 ns. This is because the simplest TIC designs count whole time base cycles to measure time interval. To improve this situation, some TIC designers have multiplied the time base frequency to get more cycles and thus more resolution.  For example, multiplying the time base frequency to 100 MHz makes 10 ns resolution possible, and 1 ns counters have even been built using a 1 GHz time base.  However, modern counters increase resolution by detecting parts of a time base cycle through interpolation or digital signal processing.  These methods have made 1 ns TICs commonplace, and even 1 picosecond TICs are available.

TICs are also commonly used to measure frequency in the time domain.  However, when a TIC is used to measure frequency, it is not practical to work directly with standard frequency signals, such as 10 MHz.  Instead, low frequency input signals must be used to start and stop the counter. As shown in the diagram, the solution is to use a frequency divider to convert standard frequency signals to a lower frequency, usually 1 Hz.  The use of low-frequency signals reduces the problem of counter overflows and underflows (cycle ambiguity) and helps prevent errors that can occur when the start and stop signals are too close together.

The information displayed by a clock or calendar, usually including the hour, minute, second, month, day, and year. Time codes derived from a reference source such as UTC(NIST) are often used to synchronize clocks to the correct time of day.

An Internet time code protocol defined by the RFC-868 document and supported by the NIST Internet Time Service. The time code is sent as a 32-bit unformatted binary number that represents the time in UTC seconds since January 1, 1900. The server listens for Time Protocol requests on port 37, and responds in either TCP/IP or UDP/IP formats. Conversion from UTC to local time (if necessary) is the responsibility of the client program. The 32-bit binary format can represent times over a span of about 136 years with a resolution of 1 second. There is no provision for increasing the resolution or increasing the range of years.

An agreed upon system for keeping time. All time scales use a frequency source to define the length of the second, which is the standard unit of time interval. Seconds are then counted to measure longer units of time interval, such as minutes, hours, and days. Modern time scales such as UTC define the second based on an atomic property of the cesium atom, and thus standard seconds are produced by cesium oscillators. Earlier time scales (including earlier versions of Universal Time) were based on astronomical observations that measured the frequency of the Earth's rotation.

A measurement technique used to send a reference time or frequency from a source to a remote location. Time transfer involves the transmission of an on-time marker or a time code. The most common time transfer techniques are one-way, common-view, and two-way time transfer.

A geographical region that maintains a local time that usually differs by an integral number of hours from UTC. Time zones were initially instituted by the railroads in the United States and Canada during the 1880's to standardize timekeeping. Within several years the use of time zones had expanded internationally.

Converting UTC to local time, or vice versa, requires knowing the number of time zones between the prime meridian and your local time zone. It is also necessary to know whether Daylight Saving Time (DST) is in effect, since UTC does not observe DST. The table shows the difference between UTC and local time for the major United States time zones.