Time and Frequency from A to Z, Q to Ra

The most common source of time and frequency signals. Billions of quartz oscillators are manufactured annually. Most are small devices built for wristwatches, clocks, and electronic circuits. However, quartz oscillators are also found inside test and measurement equipment, such as counters, signal generators, and oscilloscopes; and interestingly enough, inside every atomic oscillator.

A quartz crystal inside the oscillator is the resonator. It could be made of either natural or synthetic quartz, but all modern devices use synthetic quartz. The crystal strains (expands or contracts) when an electrical voltage is applied. When the voltage is reversed, the strain is reversed. This is known as the piezoelectric effect. Oscillation is sustained by taking a voltage signal from the resonator, amplifying it, and feeding it back to the resonator as shown in the diagram. 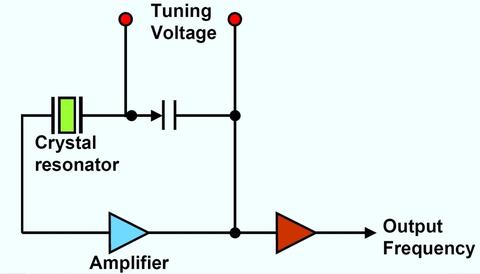 Environmental changes of temperature, humidity, pressure, and vibration can change the resonance frequency of a quartz crystal, but there are several designs that reduce these environmental effects. These include the TCXO, MCXO, and OCXO. These designs (particularly the OCXO) often produce devices with excellent short-term stability. The limitations in short-term stability are due mainly to noise from electronic components in the oscillator circuits. Long term stability is limited by aging. Due to aging and environmental factors such as temperature and vibration, it is hard to keep even the best quartz oscillators within 1 × 10-10 of their nominal frequency without constant adjustment. For this reason, atomic oscillators are used for applications that require better long-term stability and accuracy.

A clock that automatically synchronizes to a signal received by radio.  In the United States, the term is most commonly applied to clocks that receive a 60 kHz signal from NIST radio station WWVB.  However, many different devices can now be considered radio controlled clocks, including smartphones, which typically receive time from GPS that is rebroadcast by the service provider.

A type of oscillator noise caused by environmental factors such as mechanical shock, vibration and temperature fluctuations which cause random shifts in frequency. As a general rule, random walk noise cannot be removed by averaging.

The microwave cavity typically found inside atomic frequency standards where the atoms are subjected to radiation near their resonance frequency. The cavity is part of an electronic circuit tuned to match the atomic resonance frequency as closely as possible. Named after Norman Ramsey, who was awarded the Nobel Prize in physics in 1989.