Time and Frequency from A to Z, D

A number or series of numbers used to identify a given day with the least possible ambiguity. The date is usually expressed as the month, day of month, and year.  However, integer numbers such as the Julian Date are also used to express the date.

The part of the year when clocks are advanced by one hour, effectively moving an hour of daylight from the morning to the evening.  In 2007, the rules for Daylight Saving Time (DST) in the United States were changed for the first time since 1986. The new changes were enacted by the Energy Policy Act of 2005, which extended the length of DST by about one month in the interest of reducing energy consumption. DST will now be in effect for 238 days, or about 65% of the year, although Congress retained the right to revert to the prior law should the change prove unpopular or if energy savings are not significant. Under the current rules, DST in the U.S. begins at 2:00 a.m. on the second Sunday of March and ends at 2:00 a.m. on the first Sunday of November.

Daylight Saving Time is not observed in Hawaii, American Samoa, Guam, Puerto Rico, the Virgin Islands, and the state of Arizona (not including the Navajo Indian Reservation, which does observe).

A time code protocol used to distribute time over the Internet. The daytime protocol is described in the RFC-867 document, and is implemented by the NIST Internet Time Service.

The time interval that elapses between the end of one measurement and the start of the next measurement.  This time interval is generally called dead time only if information is lost. For example, when making measurements with a time interval counter, the minimum amount of dead time is the elapsed time from when a stop pulse is received to the arrival of the next start pulse. If a counter is fast enough to measure every pulse (if it can sample at a rate of 1 kHz, for instance, and the input signals are at 100 Hz), we can say there is no dead time between measurements.

The linear (first order) component of a systematic change in frequency of an oscillator over time.  Drift is caused by aging, by changes in the environment, and by other factors external to the oscillator. 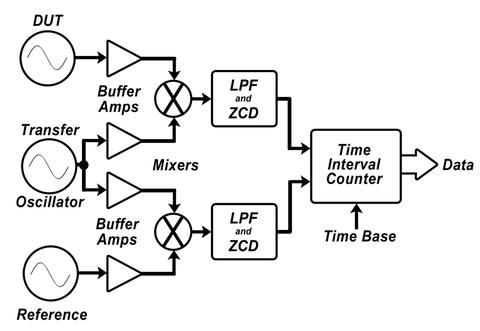 As shown in the diagram, the transfer oscillator signal is heterodyned with both the reference oscillator and the DUT to produce two beat frequencies. The two beat frequencies are out of phase by an amount proportional to the time difference between the DUT and reference, and this phase difference is measured with a time interval counter (TIC). Before being sent to the TIC, the beat frequencies pass through a low pass filter (LPF) that removes harmonics and a zero-crossing detector (ZCD) that determines the zero crossing of each beat frequency cycle. A DMTD system works best if the zero crossings are coincident or can be interpolated to a common epoch. Thus, a variable phase shifter is sometimes used to put the DUT signal nominally in phase with the reference before the DUT signal is mixed with the transfer oscillator. After the mixing process, some systems use an event counter to count the whole beat note cycles to eliminate the ambiguity of the zero crossings; other systems time-tag the zero crossings.

The resolution of a DMTD system is determined by the resolution of the TIC or the time-tagging hardware, divided by the heterodyne factor. For example, if the TIC resolution is 100 ns and the heterodyne factor is 106 (based on a 10 MHz nominal frequency and a 10 Hz beat frequency), then the DMTD resolution can be estimated at 10−7 s/106 or 0.1 ps. This high resolution allows some DMTD systems to detect frequency changes in one second of 1 × 10−13, or two or three orders of magnitude smaller than a typical frequency or time interval counter can do in the same one-second interval.  Note that all components of a DMTD system must be carefully chosen for optimum stability and not all systems are stable enough to support their theoretical resolution.

The current difference between UTC and to the astronomical time scale UT1. It is always a number ranging from -0.8 to +0.8 seconds, with a resolution of 0.1 seconds. This number is broadcast by WWV, WWVH, WWVB, and ACTS, and can be added to UTC to obtain UT1.