Time and Frequency from A to Z, P

The signal delay between a transmitter and a receiver. Path delay is often the largest contributor to time transfer uncertainty. For example, consider a radio signal broadcast over a 1000 km path. Since radio signals travel at the speed of light (with a delay of about 3.3 µs/km), we can calibrate the 1000 km path by estimating the path delay as 3.3 ms, and applying a 3.3 ms correction to our measurement. Sophisticated time transfer systems, such as GPS, automatically correct for path delay. The absolute path delay is not important to frequency transfer systems because on-time pulses are not required, but variations in path delay still limit the frequency uncertainty.

The period T is the reciprocal of a frequency, T = 1 / f. The period of a waveform is the time required for one complete cycle of the wave to occur. The relationship between period, frequency, and amplitude for a sine wave is illustrated in the graphic.

The position of a point in time (instant) on a waveform cycle.  A complete cycle is defined as the interval required for the waveform to reattain its arbitrary initial value. The graphic in the entry for “Period” shows how 1 cycle constitutes 360° of phase. The graphic also shows how phase is sometimes expressed in radians, where one radian of phase equals approximately 57.3°. Phase can also be an expression of relative displacement between two corresponding features (for example, peaks or zero crossings) of two waveforms having the same frequency.

Therefore, a 1° phase shift on a 5 MHz signal corresponds to a time shift of 555 picoseconds. This same answer can be obtained by taking the period of 5 MHz (200 nanoseconds) and dividing by 360.

A comparison of the phase of two waveforms, usually of the same nominal frequency. In time and frequency metrology, the purpose of a phase comparison is generally to determine the frequency offset of a device under test (DUT) with respect to a reference.

A simple phase comparison can be made by connecting two signals to a two-channel oscilloscope. The oscilloscope will display two sine waves as shown in the graphic. One sine wave is the test frequency, and the other represents a signal from the reference. 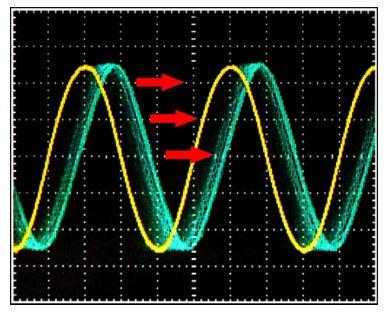 If the two frequencies were exactly the same, their phase relationship would not change and both would appear to be stationary on the oscilloscope display. Since the two frequencies are not exactly the same, the reference appears to be stationary and the test signal moves. By measuring the rate of motion of the test signal we can determine its frequency offset.  More sophisticated phase comparisons with much smaller uncertainties can be made with instruments such as time interval counters or dual mixer time difference systems.

An electronic circuit that is constantly adjusted to match in phase (and thus lock on) the frequency of an input signal.  A typical PLL is shown in the diagram.  It consists of a voltage-controlled oscillator (VCO) that is tuned using the output of a phase detector.  If the VCO frequency departs from the reference frequency, the phase detector produces an error voltage that brings the VCO frequency back into agreement with the reference frequency, keeping it “locked”. 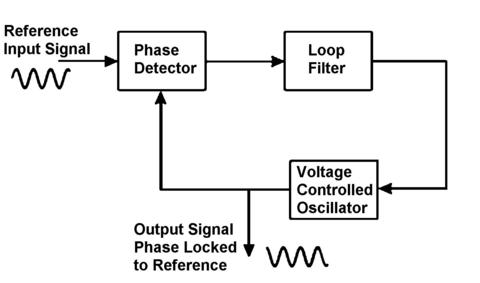 The rapid, short-term, random fluctuations in the phase of a wave. To a large extent, phase noise can be removed by averaging. The unit used to describe phase noise is dBc/Hz (dB below the carrier per Hz of bandwidth). Reports of phase noise measurement results should include both the bandwidth and the carrier frequency.

A unit of time that represents one trillionth of a second (10-12 s).

The term precision can be ambiguous, because it has several meanings in time and frequency metrology. Due to its ambiguity, it is not often used in a quantitative sense. Normally, it refers to the degree of mutual agreement among a series of individual measurements, values, or results. In this case, precision is analogous to standard deviation. Precision might also be used to refer to the ability of a device to produce, repeatedly and without adjustments, the same value or result, given the same input conditions and operating in the same environment. This use of precision makes it analogous to repeatability, reproducibility, or even stability. In other instances, precision is used as a measure of a computer's ability to distinguish between nearly equal values. For example, a compiler or spreadsheet might have 32-bit precision when doing calculations with floating point numbers. In this case, precision is analogous to resolution.

A standard protocol defined by the IEEE-1588 standard for sending time over packet-switched networks.  The Precision Time Protocol (PTP) can potentially obtain much lower uncertainties than the Network Time Protocol (NTP), often less than 1 μs.  However, unlike NTP, PTP is generally not implemented over the public Internet.  Instead, it is typically utilized over private or local area networks where path delays can be better measured and estimated. The grandmaster clock is the time reference for all other clocks in a PTP system. The other clocks are designated as ordinary clocks, which have a single PTP port, and boundary clocks, which have multiple network connections and can bridge synchronization from one network segment to another.

A standard that is designated or widely acknowledged as having the highest metrological qualities and whose value is accepted without reference to other standards of the same quantity. For example, cesium fountain standards are currently recognized as primary standards for time interval and frequency. These standards are evaluated by establishing maximum levels for the frequency shifts caused by environmental factors. By summing or combining the effects of these frequency shifts, it is possible to estimate the uncertainty of a primary standard without comparing it to other standards.