Time and Frequency from A to Z, G

A unit of frequency that represents one billion cycles per second (109 Hz).

A satellite system that can be used to locate a user’s receiver anywhere in the world.  The Global Positioning System (GPS) was the first global navigation satellite system (GNSS), but has been followed by the three other systems listed in the table (note that BeiDou and Galileo are not fully operational as of 2016).  In addition to being globally available systems for positioning and navigation, GNSS systems are widely used as references for time and frequency measurements. Some modern receivers can simultaneously receive signals from all four GNSS systems.

A constellation of satellites controlled and operated by the United States Department of Defense (USDOD). The constellation includes at least 24 satellites that orbit the Earth at a height of 20,200 km in six fixed planes inclined 55° from the equator. The orbital period is 11 h 58 m, which means that a satellite will orbit the earth twice per day. By processing signals received from the satellites, a GPS receiver can determine its own position with an uncertainty of less than 10 m.

All GPS satellites broadcast on at least two carrier frequencies: L1, at 1575.42 MHz, and L2, at 1227.6 MHz (newer satellites also broadcast on L5 at 1176 MHz). Each satellite broadcasts a spread-spectrum waveform, called a pseudo-random noise (PRN) code on L1 and L2, and each satellite is identified by the PRN code it transmits. There are two types of PRN codes. The first type is a coarse acquisition (C/A) code with a chip rate of 1023 chips per millisecond. The second type is a precision (P) code with a chip rate of 10230 chips per millisecond. The C/A code is broadcast on L1, and the P code is broadcast on both L1 and L2. GPS reception is line-of-sight, which means that the antenna must have a clear view of the sky. The signals can be received nearly anywhere on Earth where a clear sky view is available.

The primary purpose of GPS is to serve as a radionavigation system, but it has also become the dominant system for the distribution of time and frequency signals. Each satellite carries a rubidium and/or cesium atomic clock that provides the reference for both the carrier and code broadcasts.  The satellite clocks are continuously adjusted to agree with Coordinated Universal Time (UTC) as maintained by the United States Naval Observatory (USNO).  There are several types of time and frequency measurements that involve GPS, including one-way, common-view, and carrier-phase measurements. GPS disciplined clocks and oscillators are commonly used as references for time and frequency measurements.

A self-calibrating standard that is commonly used as a reference for frequency and time measurements.  GPSDOs are sold commercially by a large number of manufacturers.  The basic function of a GPSDO is to receive signals from the GPS satellites and to use the information contained in these signals to control the frequency of a local quartz or rubidium oscillator. A block diagram of one type of GPSDO is shown in the graphic. 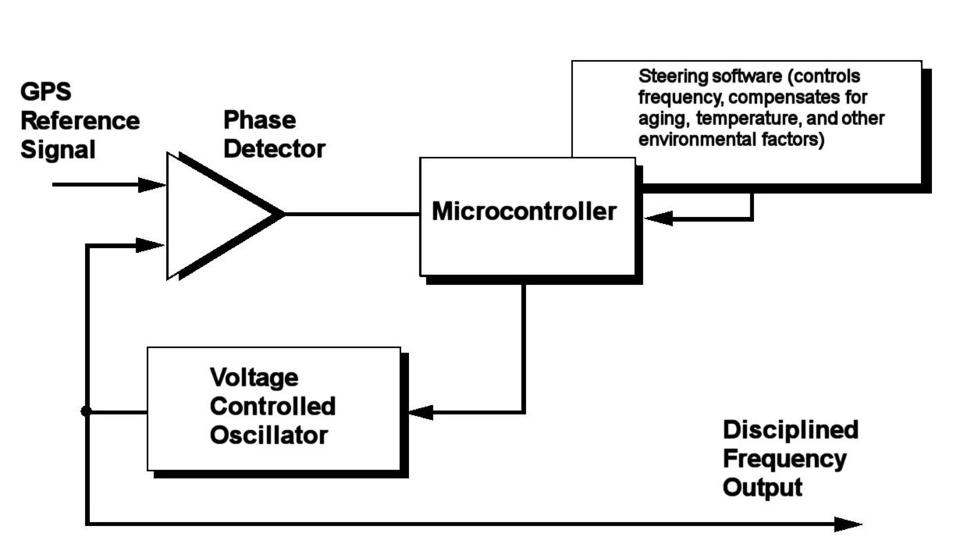 GPS signals are kept in agreement with the Coordinated Universal Time scale maintained by the United States Naval Observatory, UTC(USNO). Nearly all GPSDOs use the coarse acquisition (C/A) code on the L1 carrier frequency (1575.42 MHz) as their incoming reference signal. The satellite signals can be trusted as a reference for two reasons: (1) they originate from atomic oscillators and (2) they must be accurate and stable to within parts in 1014 over a 12 hour averaging period in order for GPS to meet its specifications as a positioning and navigation system.

The best GPSDOs transfer as much of the inherent accuracy and stability of the satellite signals as possible to the signals generated by the local quartz or rubidium oscillator. Many modern GPSDOs have a frequency stability of 1 × 10-13 or less at tau = 1 day.  Time accuracy with respect to UTC is typically better than 100 nanoseconds if a delay constant is entered for the antenna cable.

A 24-hour time keeping system whose hours, minutes, and seconds represent the time-of-day at the Earth's prime meridian (0° longitude) located near Greenwich, England. Technically speaking, GMT no longer exists, since it was replaced by other astronomical time scales many years ago, and those astronomical times scales were subsequently replaced by the atomic time scale UTC. However, the term GMT is still incorrectly used by the general public. When heard today, it should be considered as a synonym for UTC.

A radio wave that propagates close to the surface of the Earth. Groundwave propagation is a characteristic of low frequency (LF) radio signals. Since the propagation or path delay of a groundwave signal remains relatively constant and much easier to predict, LF signals are better time and frequency references than high frequency (HF) signals, which are often dominated by skywave.  The diagram shows groundwave and skywave propagation paths between a transmitter and receiver. 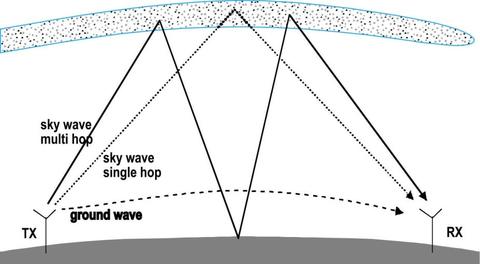