Time and Frequency from A to Z, Ch to Cy

An extended test of the performance characteristics of a clock or oscillator. A characterization involves more work than a typical calibration. The device under test is usually measured for a long period of time (days or weeks), and sometimes a series of measurements is made under different environmental conditions. A characterization is often used to determine the types of noise that limit the uncertainty of the measurement, and the sensitivity of the device to environmental changes.

Miniature atomic clocks, known as chip scale atomic clocks (CSACs), were first reported on at NIST in 2001.  These devices are now sold commercially and are notable for their small size and very low power consumption.  Their stability is typically a few parts in 1011 at tau = 1 day.  They can be based on either cesium or rubidium resonance.  It seems likely that CSACs will eventually be embedded in many types of commercial products as their price decreases and their performance improves.

A device that generates periodic, accurately spaced signals for timekeeping applications. A clock consists of at least three parts: an oscillator, a device that counts the oscillations and converts them to units of time interval (such as seconds, minutes, hours, and days), and a means of displaying or recording the results.

A measurement technique used to compare two clocks or oscillators at remote locations. The common-view method involves a reference transmitter (R) and two receivers (A and B). The transmitter is in common view of both receivers. Both receivers compare the simultaneously received signal to their local clock and record the data. Receiver A receives the signal over the path taura and compares the reference to its local clock (R - Clock A). Receiver B receives the signal over the path taurb and records (R - Clock B). The two receivers then exchange and difference the data as shown in the graphic. 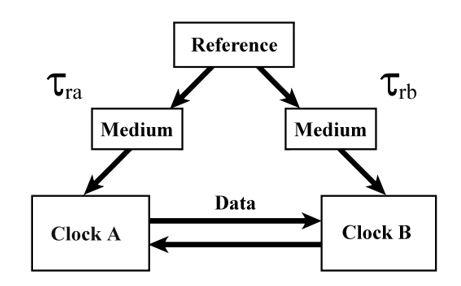 Common-view directly compares two clocks or oscillators to each other. Errors from the two paths taura and taurb ) that are common to the reference cancel out, and the uncertainty caused by path delay is nearly eliminated. The result of the measurement is (Clock A - Clock B) - (taura - taurb).

Unlike the one-way methods, the common-view method cannot synchronize clocks in real time, because data from both receiving sites must be transferred and processed before the final measurement results are known. However, the Internet makes it possible to transfer and process the data very quickly. Therefore, common-view data can synchronize clocks in near real time, a method now commonly employed by NIST and other laboratories. 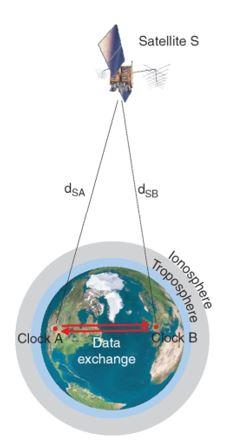 The international atomic time scale that serves as the basis for timekeeping for most of the world. UTC is a 24-hour timekeeping system. The hours, minutes, and seconds expressed by UTC represent the time-of-day at the Earth's prime meridian (0° longitude) located near Greenwich, England.

UTC is calculated by the Bureau International des Poids et Measures (BIPM) in Sevres, France. The BIPM averages data collected from more than 450 atomic time and frequency standards located at about 70 laboratories, including the National Institute of Standards and Technology (NIST). As a result of this averaging, the BIPM generates two time scales, International Atomic Time (TAI), and Coordinated Universal Time (UTC). These time scales realize the International System (SI) second as closely as possible.

UTC runs at the same frequency as TAI. However, it differs from TAI by an integral number of seconds. This difference increases when leap seconds occur. When necessary, leap seconds are added to UTC on either June 30 or December 31. The purpose of adding leap seconds is to keep atomic time (UTC) within ±0.9 s of an older time scale called UT1, which is based on the rotational rate of the Earth.  Leap seconds have been added to UTC at a rate averaging about six per decade, beginning in 1972.

The BIPM disseminates UTC as a “paper” time scale, publishing results once per month via the Circular T document. The world’s major timing laboratories use the published data from the BIPM to steer their clocks and oscillators and generate real-time versions of UTC, such as UTC(NIST).

UTC is the ultimate standard for time-of-day, time interval, and frequency measurements. Clocks synchronized to UTC display the same hour, minute, and second all over the world (and remain within one second of UT1). Oscillators syntonized to UTC generate signals that serve as reference standards for time interval and frequency.

A change in the signal tracking point of a carrier frequency that occurs during a measurement.  Cycle slips introduce phase shifts equal (in time units) to the period of the carrier frequency, or to a multiple of its period. For example, if a WWVB receiver changes its signal tracking point during a measurement, a phase shift equal to a multiple of 16.67 microseconds (the period of 60 kHz) will result. Most cycle slips are caused by a temporary loss of lock due to signal interruption, or a weak or noisy signal.