Time and Frequency from A to Z, Re to Ru

The ability of a device or measurement to produce, repeatedly and without adjustments, the same value or result, given the same input conditions and operating in the same environment.

2The number for rubidium resonance (rounded to the millihertz) was obtained through measuremements comparing a cesium fountain to a rubidium fountain, and has been recommended by the BIPM as a secondary representation of the SI second. See Mandache, Vian, Rosenbusch, Marion, Laurent, Santarelli, Bize, Clairon, Luiten, Tobar, and Salomon, Proc. 2005 IEEE Intl. Freq. Cont. Symp., August 2005. Note that commercial rubidium standards can operate at resonance frequencies that differ from this value by a few hertz.

3The number for cesium resonance was first published in 1958 (Markowitz, Essen, Hall, and Parry, Phys. Rev. Lett., 1(3), 1958) and has been used since 1967 by the International System (SI) to define the second, the base unit of time interval.

The range of possible frequencies where a resonator can oscillate. Narrowing the resonance width of an oscillator leads to a higher Q, and generally improves the stability. For example, a resonator with a line width of 1 Hz will resonate only if it is within 1 Hz of the correct frequency. 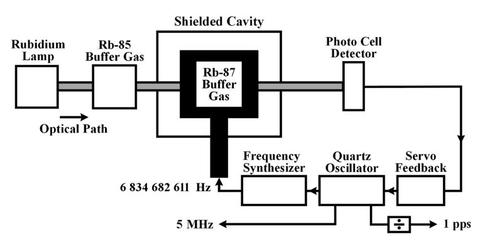 The Q of a rubidium oscillator is about 107. Undesirable shifts in the resonance frequency are due mainly to collisions of the rubidium atoms with other gas molecules and aging effects in the lamp system. These shifts limit the long-term stability. Stability at 1 second is typically 1 × 10-11 and can be as small as 1 × 10-12 at one day. The frequency offset of a rubidium oscillator ranges from 5 × 10-10 to 5 × 10-12 after a warm-up period of a few minutes or hours, so they meet the accuracy requirements of most applications without adjustment.