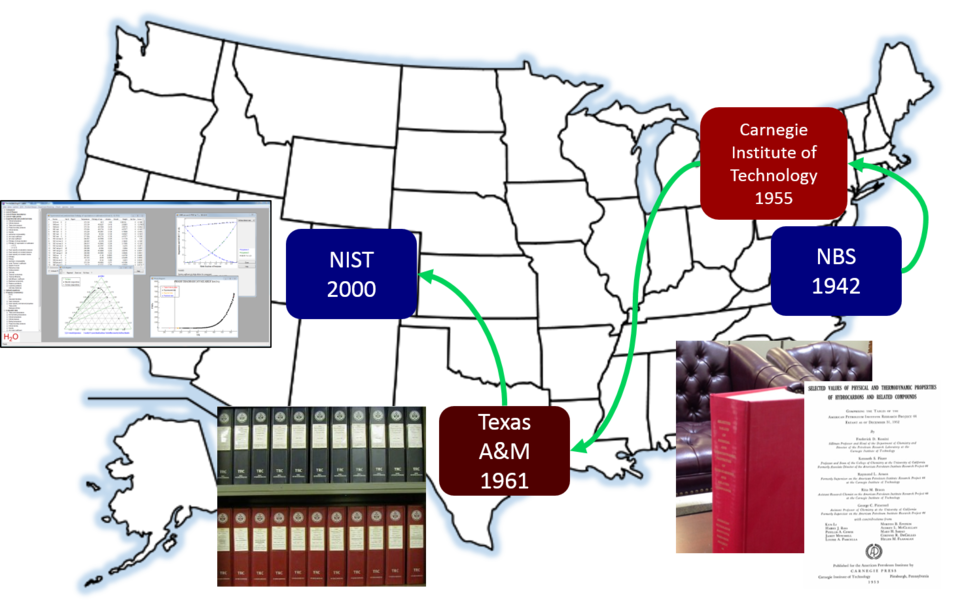 TRC (formerly the Thermodynamics Research Center) was founded in 1942 by Dr. Fredrick D. Rossini, Chief of the Section on Thermochemistry and Hydrocarbons at the National Bureau of Standards, now the National Institute of Standards and Technology (NIST), in Washington, D.C., to undertake the American Petroleum Institute Research Project 44. The major purpose of this project was to obtain information on thermodynamic and thermophysical properties of selected hydrocarbons and their sulphur-containing derivatives. That information was critically important to the development of new refinery technologies that were vital during World War II. Data tables were first circulated in loose-leaf sheets, and then published by the Government Printing Office in a bound book form around 1948. "Selected Values of Physical and Thermodynamic Properties of Hydrocarbons and Related Compounds", comprising the tables of the APIRP44 extant as of December 31, 1952, were published for API by Carnegie Press. The outstanding accomplishments of the staff of the API Research Project 44 were readily apparent by the recognition and acceptance of the work by all of industry and by virtually every major educational institution in the world today. The API Research Project 44 operated at NBS from its beginning in July, 1942 until June, 1950.

The TRC moved to Carnegie Institute of Technology (now Carnegie Mellon University) in 1950, where Dr. Rossini was the Silliman Professor and Head of the Department of Chemistry.

In 1955 TRC started another national project — Manufacturing Chemists' Association (MCA), (subsequently the Chemical Manufacturers Association, and now the American Chemistry Council) Research Project — at Carnegie Institute of Technology, Pittsburgh, PA. The purpose was to expand coverage to all organic compounds, using the same kind of loose-leaf tables as the APIRP-44. Dr. Bruno Zwolinski joined APIRP-44 and the MCA Project as Associate Director in 1958. In 1961, Dr. Rossini left TRC to become Dean of the College of Science and Acting Head of the Department of Chemistry at the University of Notre Dame. TRC was relocated to Texas A&M University as a part of the Chemistry Department. Dr. Bruno Zwolinski became the second Director of TRC.

Around 1975, TRC was moved from the Chemistry Department to the Texas Engineering Experiment Station in the Texas A&M University System. In 1979, Dr. Zwolinski resigned as Director and Dr. Kenneth. R. Hall replaced him as the third Director. In 1985, Dr. Kenneth N. Marsh became its fourth Director. After the retirement of Dr. Marsh from Texas A&M University in 1997, Dr. Kenneth R. Hall became Director of TRC for a second time, through 2000.

In 1986, Dr. Randolph C. Wilhoit designed and created an electronic database, "TRC SOURCE", for managing numerical values of thermodynamic, thermochemical and transport properties of pure compounds and mixtures extracted from the world's scientific literature. It marked the entrance for TRC of a new phase of computerized data management and processing. This led to an electronic version of the TRC Thermodynamic Tables, called the "TRC Table Database", for PCs. A great number of other specialized databases, such as "TRC Vapor Pressure", "Floppy Book", "TRC Ideal Gas", "Viscosity"... were prepared and distributed at TRC, and this work continues.

In 1991, the TRC Industry Partnership was established to ensure the continuing development and distribution of critical data for both the petroleum and chemical industries. In this program, industry participants were able to obtain thermodynamic and physical property data via electronic databases that contain critically assessed experimental data and recommended data covering organic compounds and their mixtures. Companies of different size specializing in petroleum, traditional chemicals, chemical engineering, and process simulation participated in the TRC Industry Partnership. Workshops were held annually from 1992 to 2000 providing a platform for exchanges between TRC data professionals and industry representatives.

In September, 2000 TRC moved to Boulder, Colorado to rejoin the National Institute of Standards and Technology, where it is currently operated within the Physical and Chemical Properties Division. Dr. Michael Frenkel  was appointed as the fifth Director.

In 2001 the TRC Data Entry Facility was established at NIST-Boulder with a goal to process up to 500,000 data points per year into the TRC Source database under strict data-quality guidelines. These are experimental data reported in original literature sources. In 2005 TRC, in cooperation with other leading experts in the field developed ThermoML — an XML-based IUPAC standard for thermodynamic data communication. It was updated multiple times since 2005.  New data from major journals are publicly available in TRC's ThermoML archive.

Since 2005 the TRC has continued to grow the TRC Source database while  implementing methods to increase data quality, communication, and curation.

Databases for Clathrate Hydrates and Ionic Liquids were undertaken, planning tools for identifying impact of measurements and to identify target literature for select properties in organic systems have been created, and in 2014 the TRC began work with th e Materials Genome Initiative to expand into metallic data in an effort to hasten the material development cycle.