Description of The Station Nightclub and the Feb. 20, 2003, Fire 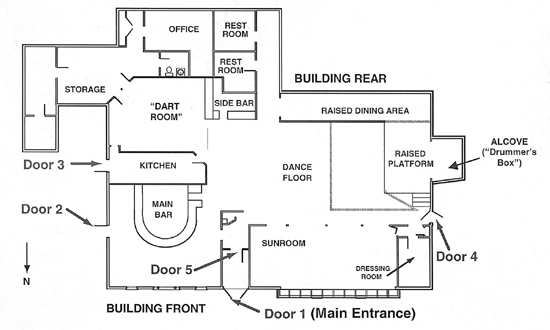 The fire began when pyrotechnics used during the performance of a band ignited polyurethane foam lining portions of the walls and ceiling of the platform area, and spread quickly along the ceiling area over the dance floor. Smoke was visible in the main entrance doorway in a little more than one minute after ignition, and flames were observed breaking through a portion of the roof in less than five minutes. Crowding at the main entrance to the building hampered egress from the nightclub. One hundred people lost their lives in the fire.

Key Findings of the NIST Investigation Regarding Building Contents:

A computer simulation of the nightclub fire shows that flames spread rapidly over foam finish material and ignited the wood paneling adjacent to foam.

The fire transitioned to a more traditional, oxygen-limited fire once the building's wooden frame ignited.

Key Findings of the NIST Investigation Regarding Fire Protection Systems

During a fire test of the NIST mockup of The Station platform area and dance floor, a sprinkler system installed in accordance with the National Fire Protection Association (NFPA) 13 standard was able to control a fire initiated in non-fire retarded polyurethane foam panels used by NIST for the test.

Sprinklers were not installed in The Station, nor would they have been required for such existing structures under 2003 editions of the model codes.

A heat detection/fire alarm system was installed in the building and was activated (sound and strobe) by the fire 41 seconds after the fire started.

Key Findings of the NIST Investigation Regarding Emergency Egress

The nightclub patrons first recognized danger 24 seconds after the ignition of the foam by the pyrotechnics. The bulk of the crowd began to evacuate around the time that the band stopped playing (30 seconds after ignition).

About two-thirds of the occupants attempted to leave through the main entrance; many were unsuccessful.

Prior to 90 seconds into the fire, a crowd crush occurred at the main entrance that almost entirely disrupted the flow of the evacuation through the front exit.

The event that precipitated the crowd crush likely was related to the arrangement of the single interior door with merging streams of traffic and the pressure to escape the rapidly deteriorating conditions in the main area of the nightclub.

Measurements in a fire test conducted on a mockup of a portion of The Station nightclub platform and dance floor produced—within 90 seconds—temperatures, heat fluxes and combustion gases well in excess of accepted survivability limits.

A computer simulation of the full nightclub fire suggests that conditions around the dance floor, sunroom and dart room would have led to severe incapacitation or death within about 90 seconds after ignition of the foam for anyone remaining standing in those areas – and not much longer even for those close to the nightclub floor.

Key Findings of the NIST Investigation Regarding Emergency Response

The first 9-1-1 call reporting the fire was before 11:09 p.m., less than 40 seconds after the ignition of the foam around the platform. Off-duty West Warwick, R.I., police officers on the scene also reported the fire about one minute after its start. Four engine companies, a tower-ladder truck, a rescue unit and a battalion chief were dispatched.

The first fire engine, staffed with a firefighter and a fire officer, was confirmed on the scene about 4 minutes after the first 9-1-1 call was received—well within the limit of the NFPA standard for fire department response. However, NFPA standards recommend a minimum staffing level of four firefighters on both engine and truck companies. NIST is unable to say how the outcome of The Station nightclub fire might have been altered if this staffing level standard had been met.

Model codes should require sprinkler systems for all new and existing nightclubs regardless of size.

In regard to building contents and finish materials, model codes should:

(a) specifically forbid (with no exceptions) from all new and existing nightclubs certain classes of materials that are known to easily ignite and rapidly propagate flames (this includes non-fire retarded flexible polyurethane foam);

(b) provide greater guidance for when large-scale tests are required to demonstrate that materials pose no undue hazard for the use intended, and establish pass/fail criteria using best measurement and prediction practices; and

The factor of safety on the time to egress should be increased in the model codes by:

(a) computing the number of required exits and permitted occupant loads assuming at least one exit will be inaccessible in an emergency;

(b) increasing the capacity of the main entrance to accommodate the evacuation, at a minimum, of two-thirds of the maximum permitted occupant level during an emergency;

(c) eliminating trade-offs between sprinkler installation and factors that impact the time to evacuate buildings;

(d) requiring staff training and evacuation plans for buildings that cannot be evacuated in less than 90 seconds;

(g) requiring explicit evacuation directions be provided to occupants prior to the start of any public event inside a nightclub.

New life-safety provisions should apply to existing as well as new nightclubs, and the practice of grandfathering older structures should be eliminated. Exemptions from the new provisions should be on a case-by-case basis and justified by a comprehensive fire safety analysis using best practices.

Model codes and standards should require redundancy in passive and active fire protection systems to ensure adequate performance of the structure when one or more of the protective systems is compromised by uncertain behaviors of the building owner or occupants (for example, disabling sprinklers for maintenance).

When an analysis of proposed changes to model codes is performed, proper account should be taken of the soundness of and safety factor provided by the existing provisions in light of the history of similar building failures.

The number of portable fire extinguishers required by model codes should be increased, with their number and placement based upon a minimum time for access and application in a fully occupied building. Staff should be properly trained in their use.

Model codes should provide specific guidance on how to implement an effective fire inspection program, including the training necessary to implement it.

Career and volunteer fire departments should comply with the minimum apparatus staffing guidelines as detailed in the relevant NFPA standards;

Public safety agencies at all levels should give greater attention to the difficulty of communication systems interoperability;

Major incident/mass casualty operations should be conducted utilizing appropriate Incident/Unified Command structures, policies and practices such as those established by the NFPA.

Research should be conducted to better understand human behavior in emergency situations and to predict impact of building design on safe egress in emergencies.

Research should be conducted to better understand fire spread and suppression in order to provide the tools needed by the design profession to address the recommendations of this report.

Research should be conducted to refine computer-aided decision tools for determining costs/benefits of alternative code changes and fire safety technologies, and to develop computer models to assist communities in allocating resources.