Annual Review of US Manufacturing 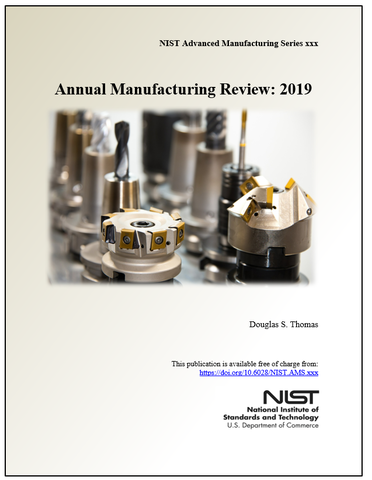 Although US manufacturing performs well in many respects, there are opportunities for advancing competitiveness. This will require strategic placement of resources to ensure that US investments have the highest return possible.

Competitiveness – Manufacturing Growth: US compound real (i.e., controlling for inflation) annual growth between 1992 and 2017 (i.e., 25-year growth) was 2.5 %, which places the US below the 50th percentile. The compound annual growth for the US between 2012 and 2017 (i.e., 5-year growth) was 1.2 %. This puts the US just above the 25th percentile below Canada and Germany among others.

Competitiveness – Productivity: Labor productivity for manufacturing increased 0.7 % from 2017 to 2018 and has had a slight upward trend, as seen in Figure 4.6. For US manufacturing, multifactor productivity declined 1.4 % from 2016 to 2017 and has had a downward trend in recent years, as seen in Figure 4.7. US productivity is relatively high compared to other countries. As illustrated in Figure 4.8, the US is ranked fourth in output per hour among 65 countries using data from the Conference Board. In recent years, productivity growth has been negative or has come to a plateau in many countries and the US seems to be following this pattern of slow growth. There are competing explanations for why productivity has slowed, such as an aging population, inequality, or it could be the result of the economic recovery. A number of the explanations equate to low levels of capital investment. It is also important to note that productivity is difficult to measure and even more difficult to compare across countries. Moreover, the evidence does not seem to support any particular explanation over another as to why productivity appears to have stalled.

Competitiveness – Economic Environment: There is no agreed upon measure for research, innovation, and other factors for doing business, but there are a number of common measures that are used. The ranking of the US in these measures is a mixed bag, ranking high is some and low in others. For instance, the US ranks 3rd in patent applications but ranks 16th in researchers per capita and 21st in journal article publications per capita. The IMD World Competitiveness Index, which measures competitiveness for conducting business, ranked the US 3rd and the World Economic Forum, which assesses the competitiveness in determining productivity, ranked the US 1st.  Note that neither of these are specific to manufacturing, though. A third index specific to manufacturing, the Deloitte Global Manufacturing Index, ranks China 1st and the US 2nd. The Competitive Industrial Performance Index, which measures capacity to produce and export manufactured goods; technological deepening and upgrading; and world impact, ranked the Germany 1st and the US 3rd.

Domestic Specifics – Types of Goods Produced: The largest manufacturing subsector in the US is chemical manufacturing, followed by computer and electronic products and food, beverage, and tobacco products, as seen in Figure 2.13. Discrete technology products accounted for 36 % of US manufacturing.

Domestic Specifics – Manufacturing Safety and Compensation: As seen in Figure 4.5, employee compensation, which includes benefits, has had a five-year compound annual growth of 0.7 %. In terms of safety, the number of fatal injuries decreased 26.2 % between 2016 and 2017 (see Table 4.4). Nonfatal injuries decreased along with the injury rate (see Table 4.5). However, the incident rate for nonfatal injuries in manufacturing remains higher than that for all private industry. As seen in Figure 4.2, fatalities, injuries, and the injury rate have had an overall downward trend since 2000.