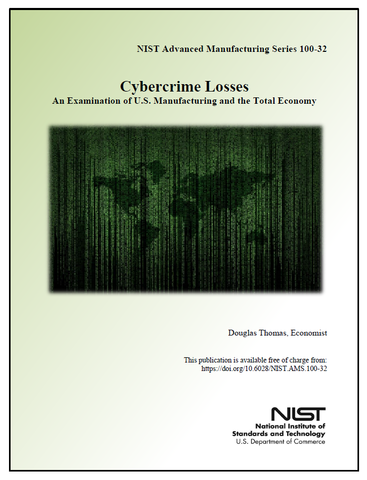 Cybercrime Losses: AN Examination of U.S. Manufacturing and the Total Economy: Cybercrime puts America’s competitive edge and economic future at risk; however, there is some debate as to the extent that this activity is impacting economic activity. This report examines a selection of the current estimates of U.S. losses due to cybercrime. Many have questioned the validity of estimates of cybercrime losses, concluding that “they are so compromised and biased that no faith whatever can be placed in their findings” (Florencio and Herley 2016).  Some approximations are potentially underestimating/overestimating the losses due to under sampling. Others do not report out data that lend themselves to estimating national aggregated losses. It is difficult to substantiate sampling issues, as the methods used are often only partially documented, a problem in and of itself; however, most acknowledge that there are serious data limitations. To address the issues and challenges raised, this report does the following:

The most statistically reliable data identified for measuring U.S. cybercrime losses is from a survey of 36 000 businesses with 8079 responses conducted by the Bureau of Justice Statistics. This is the largest sample size that could be identified that disclosed methods and results. Using this data combined with methods of uncertainty analysis, upper and lower boundary estimates were made. These approximations are consistent with the hypothesis that current widely cited values might actually underestimate the losses due to cybercrime. The 2016 losses are estimated to be between $167.9 billion and $770.0 billion or between 0.9 % and 4.1 % of U.S. GDP, a substantial amount of loss that is based on business’ estimates of their losses. For manufacturing, the loss is between $8.3 billion and $36.3 billion or 0.4 % and 1.7 % of manufacturing value added. The low estimate is calculated making the assumption that those who did not respond to the Bureau of Justice Statistics survey did not experience any losses, which is an unlikely scenario that biases it downward. Although it is possible that the true loss approaches the upper limit, the results from a Monte Carlo simulation put 90 % of the simulated values below $473 billion or 2.5 % of GDP. The high estimate assumes the average loss per company of the respondents equals the average loss per company in the U.S.