Leadership Practices of the City of Fort Collins

In this five-part blog series on the 2017 Baldrige Award recipients’ leadership presentations at the 30th Anniversary Quest for Excellence® Conference (April 8–11, 2018), senior leaders of the five new national role models share best practices and stories of how they achieved excellence.

A City Rich in Relationships

According to Fort Collins City Manager Darin Atteberry, his city is the fourth largest in the state of Colorado, with a current population of about 170,000 and expected growth to 250,000 in the years ahead. About an hour north of Denver, in the foothills of the Rocky Mountains, Fort Collins is “definitely a college town,” Atteberry added. “Colorado State houses about 30,000 students ... 6,000 faculty and staff on campus, ... , and we take very seriously our relationship with ... Colorado State.”

The city itself employs 2,400, with approximately $3 billion in assets (e.g., roads, buses, parks, government facilities). Considered a “full-service city,” Fort Collins provides typical municipal services such as parks and recreation, roads, transit, and police services, while also providing all four major utilities (water, wastewater, storm water, and electric power) to its community. It will soon add a fifth utility for the community: household and business Internet access through broadband service.

Atteberry stressed that Fort Collins is not only in a “great location” but, also, that it has a legacy of great relationships. “We’ve inherited greatness. In the 130-plus years of this city, there’s really not a history of bad ethics or lack of integrity ... we've inherited amazing leadership ... we've inherited amazing relationships between our residents and our local government,” he said, mentioning the community’s repeated support for the city when enhancing facilities or enduring economic downturns.

“Local Government Can Be Great”

In sharing the story of his city’s journey to excellence, Atteberry again stressed the belief he said he and his colleagues in the Fort Collins government share that “local government can be great”—an energizing conviction he also highlighted in his remarks at the ceremony where he accepted the city’s 2017 Baldrige Award. Atteberry realized the importance of this belief to his leadership of Fort Collins years ago while reading a Fast Company article that prompted him to ask himself, “What’s the one thing you believe that no one else believes?” A determination to demonstrate great government has evidently helped propel Fort Collins’ quest for excellence.

Moving from “Trust Us” to Data-Driven

During its pursuit of excellence, the city leadership moved from practices that reflected what Atteberry referred to as a “’trust us’ kind of government” to one that is “data-driven.” Therefore, today the city systematically measures its performance and publicly shares results. For this transition to fact-based management and fuller transparency, Atteberry credits the city’s use of the Baldrige Criteria for Performance Excellence, which he said helped city leaders “be more intentional in our alignment of planning [for] budgeting and putting systems in place.”

Atteberry’s leadership presentation also emphasized the importance of his organization’s culture and its focus on strategy in achieving desired results. Atteberry recited the city’s mission (“to provide world-class municipal services through operational excellence and a culture of innovation”) and vision (“exceptional service for an exceptional community”) as he affirmed that the city’s culture is built around its mission, mission, and values.

Part of the city’s strategy, said Atteberry, “is to be crystal clear about what we plan to accomplish and how we plan to budget accordingly.” The city’s strategic planning (short- and long-term), budgeting, measurement and reviews, and work system planning are all organized around the following seven major outcome areas (which were developed collaboratively by citizens, business representatives, and city staff members):

As shown in the graphic above, the city’s leadership system incorporates its strategy, culture, and results. (This model was created in 2012 as an improvement based on feedback the city received when participating in Colorado’s state-wide Baldrige-based award program, Rocky Mountain Performance Excellence [RMPEx]).

“This structure allows us to really focus our business and see some amazing results,” said Atteberry.

At the outset of his presentation, Atteberry pointed out that Fort Collins was named “America’s Most Satisfied City” by Time magazine in 2014 based on Gallup survey results. At the end, he highlighted the favorable trend over the past decade in residents’ ratings of city government services. As he reported, the percentage of residents who ranked the overall quality of city services as being good or very good increased from 77 percent in 2008 to 90 percent during the most recent survey.

“To me, the Baldrige framework really demonstrates the value of culture and strategy, and we’re really here [as a Baldrige Award recipient] … because of the amazing, amazing framework,” said Atteberry.

View more results from the City of Fort Collins. 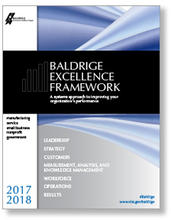 As the largest provider of higher education in South Texas and with a 73% minority community, Baldrige Award recipient Alamo Colleges District is proud of its

Let me start with some background information. A few weeks ago, I received an email from a former chair of the Baldrige Judges Panel and long-time friend, Kathy