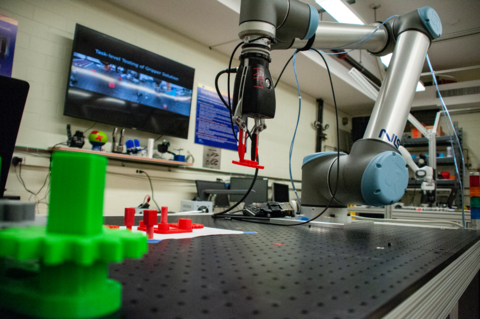 When you pick up one pencil from a pile on a table, how does your hand know where to go or what to grab? Your eyes help out.

For robots to do the same, they need their own way to see the object that they want to pick up or put down. It takes perception, specifically a sensor-based system that can accurately identify – sometimes to within a millimeter or less – an object’s position, orientation and dimensions.

Currently, robots on a factory line require special, time-consuming and expensive accommodations to function. A product’s parts need to be held at just the right height and just the right angle so that the preprogrammed robots can get the job done. If that job changes, manufacturers need to reprogram the robot’s movements and build an entirely new set of fixtures to position the parts all over again.

Just as your eyes would help with that pencil, 3D perception systems let robots switch from one task to the next, identify specific parts and pick them up.

But just as no two eyes are exactly the same, no two manufacturers’ robot sensors perform the exact same way. Sensors respond differently to variations in light, how shiny an object is, the shape of an object, etc. Right now, there are very few ways to compare a 3D sensor’s performance from one company to another.

And we’re looking for friends in the field. Developing standards depends on a community of experts and users reaching consensus. If you’re interested in this topic or know someone who is, please spread the word and get in touch with our researchers.

The U.S. Commerce Department’s National Institute of Standards and Technology (NIST) Manufacturing Extension Partnership (MEP) has made a new cooperative

Throwing a perfect strike in virtual bowling doesn’t require your gaming system to precisely track the position and orientation of your swinging arm. But if you

To spur significant innovation and growth in advanced manufacturing, as well as save over $100 billion annually, U.S. industry must rectify currently unmet

On Tuesday, March 8th, 2016, the NIST Advanced Manufacturing Office (AMO) hosted over 200 participants for a Proposers' Day, where the attendees learned the

The use of robots in factories is limited by the robots’ ability to safely collaborate with one another and with human workers. NIST’s technical leadership

The application of robotics in manufacturing is hindered by their lack of agility, including their large changeover times for new tasks/products and their

Manufacturers currently struggle with the assessment of a machine/robots' accuracy degradation that limits the efficiency of machine/robots in high precision
This paper presents a set of performance metrics, test methods, and associated artifacts to help progress the development and deployment of robotic assembly
This paper describes a set of metrics and supporting benchmarking protocols for determining the performance characteristics of robot end-effectors. In the short
Accurate pose determination of an industrial robot end-effector is critical in many applications. The pose is usually derived from a forward kinematic model of

The NIST manufacturing robotics test bed consists of several labs located in three buildings on the main NIST campus. Combined, these serve as a resource for

Located on the NIST Gaithersburg campus, the Robotics Test Facility – also known as Building 207 – is a laboratory for developing standard methods of measuring

Through the USARSim and MOAST open source projects, the National Institute of Standards and Technology (NIST) is promoting performance...