Other EBITs Around the Globe

1. The first facility was built at the Lawrence Livermore National Laboratory. The Livermore EBIT facility is presently dedicated to atomic spectroscopy. One of the two EBITs previously constructed at Livermore was moved to Berkeley in 2001.

2. The Berkeley EBIT is now used primarily for research with extracted ion beams and has its own web site.

3. The NIST EBIT is equipped both for atomic spectroscopy and for studies with extracted ion beams.

8. The Freiburg EBIT has now become the Heidelberg EBIT.

9. The EBIT at the Institute for Applied Physics, Johann Wolfgang Goethe-Universität Frankfurt am Main.

10. The Stockholm EBIT (came online in April of 2005 at the AlbaNova Physics Center, run in connection with the University of Stockholm).

11. The Belfast EBIT in Northern Ireland at the Queen's University of Belfast at the International Research Center for Experimental Physics.

13. The Canadian EBIT at TRIUMF.

14. An EBIT is under construction for installation at use in Germany at the BESSY VUV free electron laser.

15. An EBIT is being planned for the MATS project in Germany.

18. The EBIT at the Forschungszentrum Dresden-Rossendorf (FZD)

20. The EBIT at the Stanford Linear Accelerator Center

The EBIS (Electron Beam Ion Source) is a very similar device that is used exclusively for the production of highly charged ion beams. EBIS facilities can be found at several locations around the world, including: 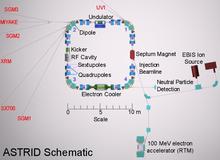 the Aarhus EBIS at ASTRID,

... and many places in Japan (for example, Tokyo Metropolitan University).