What is an EBIT? 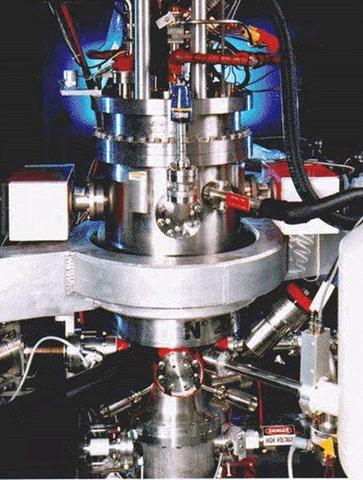 The electron beam ion trap (EBIT) is a small-scale laboratory instrument which uses a tightly focused and energy-tunable electron beam to create, trap, and probe highly charged ions. Virtually any charge state of any element in the periodic table can be studied using an EBIT simply by injecting the desired element and adjusting the electron beam energy appropriately. Here at NIST, we have produced and recorded x-ray spectra from charge states as high as Bi73+, which corresponds to the neon-like state (only ten electrons remain). We have run our EBIT at electron beam energies up to 33 kV which is theoretically enough to produce charge states as high as U90+. At Lawrence Livermore National Laboratory (LLNL), researchers recently used a high energy version of the EBIT called Super-EBIT to create fully-stripped uranium (92+).

One of the primary ways of studying the ions in an EBIT is spectroscopy, which involves observing and analyzing the radiation (usually x-ray) emitted by the ions after collisional excitation by the electrons from the beam. The radiation is viewed through side windows at 90 degrees to the electron beam direction. Typically, a wide range of low and high resolution spectrometers are employed, including Bragg crystal x-ray spectrometers and solid state silicon and germanium detectors.

The primary component of the EBIT is the electron beam, which is formed in a commercial Pierce-type gun and is guided, accelerated and focused by several magnetic coils and high voltage electrodes. The electron beam is decelerated and finally extinguished at a cooled copper electrode called the collector. The maximum electron beam energy is determined by the positive voltage bias applied to the drift tubes (basically a set of three cylindrical copper tubes) and can range from about 700 eV to over 30,000 eV in the NIST EBIT. In the super-EBIT at Lawrence Livermore National Laboratory, the electron beam energy can extend beyond 200,000 eV. The maximum achievable electron beam current depends on the drift tube voltage, but usually is around 150 mA. The electron beam starts off with a diameter of approximately 1 millimeter and is then compressed to less than 100 micrometers by a 3 tesla axial magnetic field provided by a superconducting Helmholtz-pair magnet.

The electron beam performs three functions: it creates the highly charged ions by removing electrons via electron impact ionization; it confines the ions by providing a trapping potential in the radial direction (the space charge of the electron beam is negative, which attracts the positively charged ions); and it excites radiative transitions in the ions, so that they can be studied spectroscopically.

Historically the design of the first EBIT prototype is connected to the name of Morton Levine and Ross Marrs. Their goal was to develop an instrument based on the principles of an earlier device called an "EBIS" (electron beam ion source) but with some fundamental improvements, allowing higher charge sates to be formed, and allowing in situ spectroscopic access to the ions. In contrast to the case for EBIS, X-ray spectroscopy was to be the primary method of studying ions produced by EBIT.

EBIT was not designed to be an ion source like its ancestor the EBIS. Since the launch of the first EBIT, however, its operation for production of very high charge states was so successful that there are now applications which are based on the extraction of ions from the machine.

After the construction of the first EBIT at Livermore, a second advance was made -- development of a high energy version of the machine. With this instrument -- usually referred to as Super EBIT -- even the highest charge states of all the elements in the periodic table are accessible. Recently the Super EBIT demonstrated production of fully stripped uranium, which has the highest atomic number among the naturally occurring elements.

The energy of the Super EBIT electron beam can be varied up to just beyond 200 keV. For most applications, however, one does not need such high electron beam energies. In fact, 40 keV is enough to theoretically strip any element to the helium-like state, and even to fully strip elements up to an atomic number of 50. Limitations on maximum obtainable current densities however make significantly higher electron beam energies desirable.

Soon after the demonstration of EBITs effectiveness, decisions were made at NIST, the Naval Research Laboratory (NRL), and Oxford University (United Kingdom) to build similar machines. The primary motivation was the possibility of doing high precision spectroscopy of highly charged ions. Due to their close proximity and long-standing previous collaboration on other spectroscopic work, NRL and NIST decided to team up to build a single EBIT for joint use in the metropolitan Washington DC area. Vacuum and internal components for both the new U.S. and U.K. machines were made in the Oxford machine shops as part of a collaboration between the institutions in the two countries. (More detail on the history of NRL's involvement.)

The assembly of the new EBITs progressed in parallel, reaching the final phase in August of 1993 when the NIST EBIT became operational. There are already new designs and projects underway, proving the wide acceptance of the possibilities offered by the EBIT to the scientific community.

A brief listing of some milestones in the development of the NIST EBIT facility.