Terahertz (THz) spectroscopy provides fundamentally new information about biomolecular structure and functional dynamics. In the crystalline phase, the THz phonon modes reflect motions over extended length scales and include lattice translations, intermolecular librations, and intramolecular vibrations. The THz vibrational frequencies associated with these modes are largely determined by the forces (e.g. hydrogen bonding, electrostatic, van der Waals) responsible for binding including those associated with co-crystallized solvents. In the liquid phase, the unstructured THz absorption of aqueous samples can give information about the surrounding water layer including its effective thickness and impact on the folding dynamics. An intermediate domain of special interest also exists in co-solvated crystalline biomaterials where the THz absorption features remain discrete and well-resolved but where water is both labile and highly structured and consequently non-absorbing as it is in ice. Polypeptides co-crystallized with water fall into this intermediate class and are the focus of the studies presented here. A common property of these systems is the extensive multi-center hydrogen-bonding network that exists throughout the lattice. As shown here, subtle modifications to these networks by water can impact the phonon frequencies in surprising ways depending on the hydrophobic or hydrophilic nature of the peptide-water interaction. 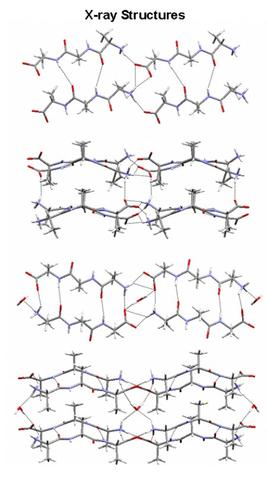 The three crystalline forms of trialanine (parallel, p-Ala3, and anti-parallel, ap-Ala3 β-sheet forms and hydrated anti-parallel β-sheet, ap-Ala3-H2O) exist as highly networked peptide crystals and serve as a benchmark system to investigate the sensitivity of THz features to β-sheet structure and the impact of water on hydrophilic sites in the crystal. Additionally, these systems are simple enough to treat computationally at the full quantum level of theory using density functional theory (DFT). 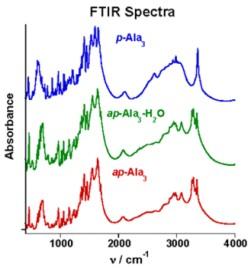 X-ray crystal structures of the parallel (top) and anti-parallel (bottom) hydrated β-sheet forms of trialanine. The water is hydrogen-bonded to the inter-sheet network and serves as the only link to bridge the sheets. When removed under vacuum, the inter-sheet binding is weakened and results in broadening of the THz absorption features (below).

In the mid-infrared (FTIR), subtle differences are apparent in the bend (≈1500 cm-1) and stretch (≈3000 cm-1) regions for the two β-sheet forms. However, the water attached at hydrophilic sites in the ap-Ala3 crystal has no apparent impact in this region of the spectrum. 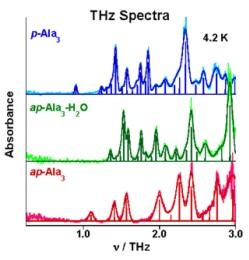 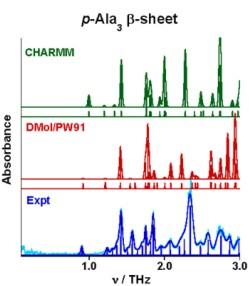 THz spectra are remarkably sensitivity to the different hydrogen bonding networks of the two β-sheet forms and to whether water is (middle trace) or is not (bottom trace) hydrogen bonded to hydrophilic sites of this network.

**Terahertz spectroscopy provides a sensitive probe of the different hydrogen bonding networks associated with β-sheet structures and to the hydration state near hydrophilic sites in the crystal as exemplified by the three different forms of trialanine.

Hydrogen bond distances are under-estimated at both the force field (CHARMM) and quantum chemical (DMol/PW91) levels of theory, and for features at common frequencies, the predicted vibrational motions at the two levels are not at all similar. Theoretical results for the ap-Ala3 with and without water (not shown) are worse where all predicted features are significantly red-shifted.

**Based on these comparisons and others, the computational results suggest the force field parameters will require further refinement to reliable model the interactions with water and the large scale functional motions important in biomolecular systems. Particularly for the weak inter-sheet hydrogen bonding present in the anti-parallel β-sheet forms, the quantum chemical theory applied here (Density Functional Theory) is not inadequately predicting the THz absorption features suggesting the need for new functionals optimized for multiple hydrogen bonding centers and/or for advanced methods that explicitly treat electron correlation for periodic systems.

The nuclear motions at these two levels of theory are qualitatively different. Consequently, similarities apparent in the predicted spectra are only coincidental.

A series of crystalline dipeptides are known from x-ray studies to form nanotube structures having the central core region decorated with hydrophobic groups While the sidechain groups of this series can range from alanine to valine to isoleucine, the backbone structures and hydrogen bonding networks are very similar and present an opportunity to examine the sensitivity of THz features to the simplest of change in protein structure. 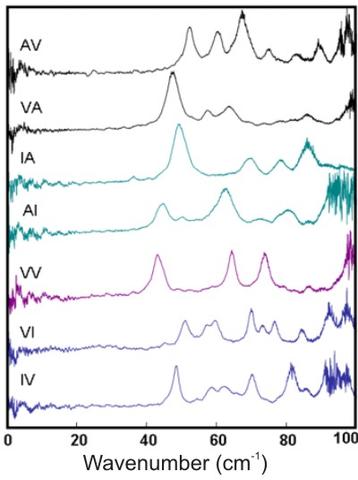 Terahertz absorption spectra of a series of hydrophobic structures (A – alanine, V – valine, I – isoleucine). The core size decreases from the top to the bottom of the figure (from 5.2 Å for AV to 3.3 Å for IV). Although the network of hydrogen bonds that define the backbone are very similar, the THz spectra are qualitatively different even for structures where the sequence is simply reversed.

In some cases, the hydrophobic pore can accommodate small solvent molecules including water thus enabling THz studies of the impact of water confined within the hydrophobic pore regions of peptides which represents a model system for the water permeability through trans-membrane channels. 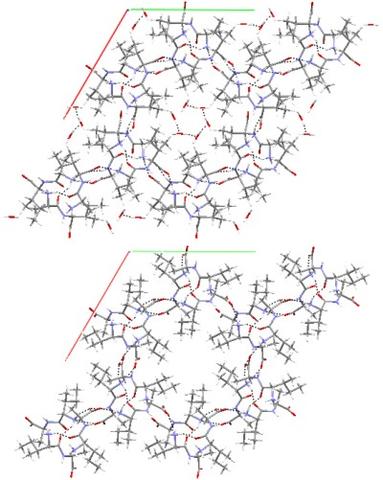 Some nanotubes but not others may support water. One of the sharpest differences is found for AI (top) and its retroanalog, IA (bottom). While both nanotubes have similar pore diameters, x-ray and THz studies reveal only AI accepts water by forming a helical water network that spirals through the tube (top). Quantum chemical results (DFT/PW91/PBC) of both nanotubes with and without water predict small energy differences and fail to account for the water permeability dynamics of these two systems.

**In contrast to the drastic spectral changes found upon hydration at hydrophilic sites in the anti-parallel β-sheet of trialanine, the terahertz spectrum of the AI nanotube structure (and other nanotube spectra not shown) change very little when the hydrophobic pores are filled with water.

The THz absorption spectra at 5 K of dry samples of AI and IA are shown for pellet (blue) samples and in pure form deposited on a waveguide (red). The more highly resolved waveguide spectra give a better assessment of the predictive quality of the quantum chemical results (green). The calculated spectrum for the hydrated crystal of AI (violet) is also in good agreement with experiment (not shown) where only a slight spectral red shift (≈2.5 cm-1) is observed. These results should be contrasted with the two predicted spectra of IA where large spectral changes occur with hydration. As discussed below, examination of the modes (indicated with *'s) gives some insight into why new features seem to appear in the spectrum of IA but not AI.

The predicted normal modes of AI•H2O and IA•H2O are shown that correspond to the "star'ed" features above. Notice that for both modes of AI•H2O, the water helix of AI is moving in concert with the atoms of the tube, in effect, increasing the reduced mass for that mode and hence resulting in a slightly red-shifted spectrum relative to the dry tube. In stark contrast, the motion of the water helix in IA appears to be largely decoupled from tube motion giving new modes associated with the water helix alone. The importance of the vibrational nanotube-helix "mode match" may be the underlying reason why the water permeability dynamics through these two nanotubes are so different. The screw-like insertion of the water helix over transition state barriers may be augmented when concerted but to the exclusion of solvent in cases of mode mismatch. These THz helix modes of water/ice may appear in other larger hydrophobic tubes that can accommodate and not dynamically exclude insertion.

**Across these simple hexagonal space group structures (seven in all), spectral predictions from DFT are in reasonable agreement with experimental observations. However, classical force field predictions are still not found to be reliable enough.

**THz modes may play an important role in the water permeability dynamics of peptide systems where a subtle balance exists between the attractive hydrophilic interactions within the water network and the repelling nature of hydrophobic regions of peptides. On-going THz studies are exploring model systems of β-amn>n>n>n>yloid peptides with water and the aggregation pathways for plaque formation that are associated with the protein misfolding diseases, Alzheimer's, Parkinson's, Huntington's and islet amyloidosis in type 2 diabetes.