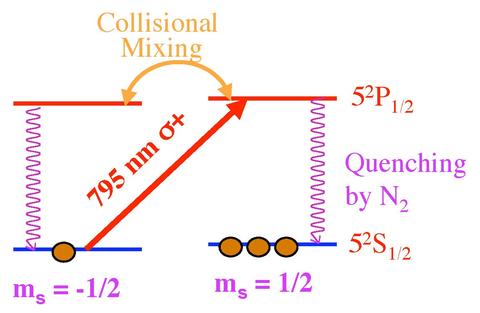 Using the spin exchange optical pumping (SEOP) method, polarization of the 3He gas involves three steps. Enclosed inside the glass cell is ~100 mg of Rubidium (Rb) and Potassium (K). The cell can be pressurized up to 3 atm depending on the instrument usage. Most of the gas is 3He while only a small volume (0.06-0.13 atm) is N2. A uniform magnetic field is maintained around the cell in order to sustain the polarization.

The first step is the polarization of Rubidium (Rb) in the vapor phase. A simple electron state diagram for the unpaired Rb valence electron is shown above. Using a high power infrared diode laser array (\(\lambda\) = 795 nm, specific to the Rb spectrum), angular momentum from right circularly polarized light is passed from photons to Rb valence electrons. Photons, which have a spin magnetic moment ms = +1, are absorbed by the Rb atoms. Under conservation of angular momentum, excited electrons follow the selection rule \(\Delta\)mj= +1. The only allowed transition is from an mj = -½ state to an mj = +½ state, since electrons are spin-½ particles. The electrons are excited from the ground state 5s½, mj = -½ orbital, to the excited state 5p½, mj = +½. The excited electrons are evenly distributed between the spin +½ and -½ states of the 5p orbital through collisional mixing. From the excited state, electrons radiatively decay back to the 5s½ orbital, a process known as collisional de-excitation, with half decaying to the mj = +½ state and half decaying to the mj = -½ state. Electrons in the mj = +½ state remain in that state for two reasons. The selection rules prevent another transition where \(\Delta\)mj= +1. Additionally, the N2 gas prohibits radiative photon emissions with mj= −1 from exciting electrons in the mj = +½ ground state to the mj = -½ excited state. N2 has a large quenching absorption cross section with the ability to transfer the energy emitted from Rb into its own vibrational and rotational motion. Instead, the laser light re-excites electrons which decay to the mj = -½ ground state. This process, known as depopulation pumping, removes electrons from the mj = -½ state in order to fill the mj = +½ state, polarizing the Rb. The second step is the polarization of the Potassium (K). This process occurs through spin-exchange collisions of Rb atoms with K atoms. In the case of K, valence electrons are excited from the ground state 4s½, mj = -½ orbital, to the excited state 4p½, mj = +½. This interaction transfers the Rb polarization to the K.

The final step is the polarization of the 3He nucleus by both K and Rb through hyperfine interaction. Though, both Rb and K atoms collide with the 3He atoms, the spin-exchange process is more efficient for K-3He collision than for Rb-3He collisions (schematic above). For the spin-exchange to occur, unpaired valence electrons must penetrate the 3He electron cloud and collide with the nucleus. Over time, the 3He gas becomes polarized. Due to low probability of spin-exchange, the 3He polarization process is very slow. The full polarization time or "pump-up time" can be on the order of 1-2 days. The pump-up time is determined by a number of factors and varies from cell to cell. Although, the SEOP process is slow, it is possible to polarize cells with high pressures (1-10 atm) as well as low.