Dr. Kalman Migler is a staff scientist in the Polymers Processing Group at NIST where he studies non-equilibrium phenomena in soft matter.  He develops measurement methods that provide insight into the nature of polymer flow and rheology, with applications that range from additive manufacturing to recycling.

Awards & Honors  (back to top)

Opportunities for post-doctoral research fellowships are available through the NRC postdoctoral program (next deadlines: August 1 and February 1).

Polymers based Additive Manufacturing (3D Printing)   (back to top)

Additive Manufacturing (AM) refers to a rapidly growing set of technologies whereby custom objects are built up from 3D digital designs via computer-controlled addition of materials.  Currently, most materials used in AM were developed for traditional processing applications and most AM manufacturing does not employ feedback protocols based on multi-scale measurement and modeling of the processes. Additive Manufacturing can fundamentally transform manufacturing of goods by allowing for mass customization.

We are measuring the fundamental processes and material parameters that are critical to understanding and furthering polymers-based AM. A primary problem in AM by fused filament fabrication concerns the low adhesive strength between adjacent strands. In order for a strong adhesive bond to form, polymers from adjacent strands must interdiffusive and entangle with each other before the polymers chains are frozen in-place by crystallization or by glass formation. The temperature profile of the FDM process is such that this interdiffusion is limited by low temperatures, short times and lack of shearing forces.

In order to overcome these limitations, new materials and processes that allow more efficient fusion must be developed. We are guiding industry through the great "phase space" of materials, mixtures, and processing protocols  by development of the tools that link the molecular level considerations (polymer chain-length, polymer branching, polymer chemistry) with nano-scale processes (polymer interdiffusion and crystallization across the interface) to the ultimate properties (adhesive strength).

For further information including the June 2016 Workshop and Roadmap, and the project page for Polymers Additive Manufacturing and Rheology

Polymer Crystallization and the rheo-Raman-microscope    (back to top)

The mechanism of polymer crystallization under non-equilibrium conditions, such as those that occur in industrial processing, is still unknown and prevents a scientific approach to development of new materials. We are applying Raman spectroscopy to this problem because of its ability to measure molecular conformational changes that lead to the crystalline structures. We have teamed with a major vendor to develop the rheo-Raman-microscope which is now available on several commercial platforms.  We can perform simultaneous Raman microscopy, rheology and optical microscopy. This allows for  unprecedented measurement of the coupling between molecular conformation, chemical kinetics, microscopic structure and mechanical response.   This has allowed us to determine the relationship between modulus and crystallinity and to propose a percolation-based model to relate the two.  Information from this work feeds into additive manufacturing   Beyond the immediate application of polymer crystallization, we intend to establish the instrument's suitability to problems in diverse areas such as nano-composites, curing, multi-component materials, and bio-materials.

For further information, see the project page for Polymers Additive Manufacturing and Rheology

Rheology and processing of nanotubes and their composites   (back to top) 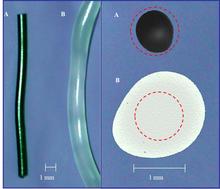 We examined the effects of shear and processing on nanotube composites and made the first in-situ measurements of carbon nanotube induced "conductivity thinning" and die swell elimination. We showed how these effects originate from negative normal forces that are induced by the nanotubes during flow. These measurements are important because they demonstrated the potential for nanotubes to impart improvements in both processing and material performance.

We developed a system to simultaneously measure the rheological and dielectric response of a polymer to applied flow. We used it to show the intimate coupling between the two for carbon nanotube composites under flow, and raised interesting questions as to why rheological thinning proceeds conductivity thinning. Following this work, vendors now provide the option to add dielectric spectroscopy capability to their commercial rheometers.

Selected Publications:
Polymer processing lab on a chip     (back to top)

We developed a miniaturized polymer processing laboratory platform; inspired by the advent of micro-fluidics, we asked if measurements of polymer processing parameters can be similarly reduced in size. We set out to develop a new R&D platform for polymer processing that reduces sample volume, and therefore waste, and significantly increase the speed of materials development. Termed the "polymer processing lab on a chip," we shrunk measurement and processing techniques so that typical experiments require 100 times less material. From the measurement perspective, we developed a rheological measurement that is similar in principle to capillary rheometry but can be conducted in parallel (at least four at a time) using only a single pellet of material. This micro‑rheometry method uses optical probes to monitor the flow front as the polymer fills a capillary channel. Even with the size reduction, the accuracy of this method is similar to standard rheological methods. Further, due to the reduced sample volume, these measurements are considerably less sensitive to the confounding effect of shear heating.

From the polymer processing perspective, we showed how to blend polymers at these greatly reduced volumes via a planar polymer micro-mixer. Utilizing a split-and-recombine approach, we generated numerous blend morphologies: multi-layers, domain/matrix, and telescopic structures. With D. Moon, M. Cicerone, Y. Lee.

MEMS and micro-rheometers     (back to top) 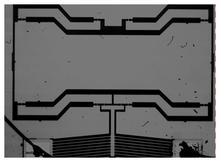 We developed a MEMS based rheometer. Our goal is to develop and promote the adoption of small-volume rheological methods for complex fluids including bio-fluids, where small volume capability is advantageous because it is the natural length scale, the sample size availability is small, or the technique is more sensitive. We have constructed and tested an oscillatory micro-rheometer using MEMS based fabrication technology to measure the frequency dependant modulli of complex fluids, such as bio-fluids.  See project page

We discovered the droplet-string transition in confined blends under shear.  Prior to our work, virtually all research on the flow of emulsions and two component blends was conducted in the unconfined limit, defined as the droplet size being much smaller than the smallest geometrical dimension. We showed that the effects of confinement are enormous; we mapped out a rich experimental landscape that included new structures; strings, layering of droplets and pearl- necklaces. We then considered the simpler system of a single confined droplet and found that the well-known Taylor diagram from the 1930s is strongly altered by confinement. Numerous researchers have followed up on these pioneering observations. These concepts form the basis for droplet based microfluidics.

We discovered vorticity alignment in strongly sheared polymer blends.  We discovered that under certain circumstances that sheared droplets can align in the vorticity direction. This was an unexpected finding and counter to prevailing wisdom. We traced the effect back to droplet elasticity. We were able to make these vorticity observations in both model shear studies, as well as in extrusion based studies, showing how the laboratory results are relevant to industrial processing. With J. Pathak, S. Hudson, Y. Son, E. Hobbie, J. Douglas, N. Martys

Sharkskin and fluoropolymers    (back to top)

We settled debate over "the mechanism of the sharkskin".  Sharkskin (aka surface melt flow instability) is a manufacturing defect that causes a rippled texture on the surface of extruded polymers; the origins have been long debated. Most prior work employed indirect pressure/shear rate measurements coupled with off-line measures of extrudate strand waviness. We settled crucial aspects of the debate by visualizing the polymer melt flow in the immediate vicinity of the exit of a capillary die and conducted painstaking measurements of the velocity field in this region. We found compelling evidence that the sharkskin is caused by extensional rates exceeding critical values.

We made the first direct measurements of Polymer/Polymer Slippage and showed how fluoropolymers eliminate sharkskin in polyolefins. It was long known that addition of fluoropolymers in trace amounts to certain polyolefins can eliminate sharkskin, yet there had been no direct observations of how this occurs and only speculations as to why. We led teams that included Professor Macosko, 3M/Dyneon and Dow DuPont Elastomers (DDE). We developed direct velocimetry and evanescent-wave techniques that measure the coating of fluoropolymers onto the die wall with a sensitivity of 20 nm coating thickness. These unprecedented techniques provided definitive proof of how fluoropolymers coat the solid wall and then induce slippage of the polyolefin. We further showed that the fluoropolymer droplet size affects the coating kinetics, which formed the scientific basis for a new product launch. with C. Lavalle, C. Macosko, S. Kharchenko, D. Bigio, P. McGuiggan, M. Meillon, S. Oriani

Polymer Extrusion: in situ Temperature and  Morphology Measurements (back to top)

Temperature gradients: we led an industrial consortium whose goal was to accurately measure polymer temperature during processing operations. Industrial scientists had been unsuccessful in making accurate resin temperature measurements by methods such as IR or thermocouples because of shear heating, moving extruder screws and high resin viscosity. We thus employed a novel approach based on doping of fluorescence dyes that exhibit temperature dependent fluorescence into polymeric resins. We observed temperature excursions exceeding 20 °C, along with temperature gradients from the metallic wall into the resin. These methods were copied by consortium members and implemented in their home laboratories. 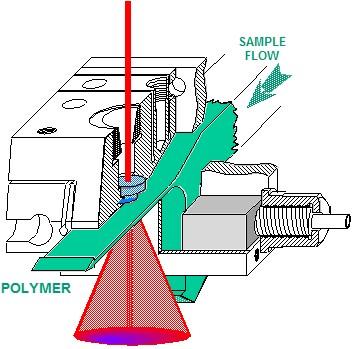 Blend Morphology:  we developed an in-situ microscope and light scattering apparatus for polymer blends extrusion. The measurements are conducted in the slit-die of a twin screw extruder. With AJ Bur, EJ Amis, CC Han & E Hobbie

We made the first definitive measurement of polymer slippage at a solid surface.   It is now well-understood that molten polymers can slip at solid surfaces – with major implication for rheology and processing - but in the 90's this notion was still under debate due to lack of direct evidence. Dr. Migler, with Liliane Leger, utilized fluorescent evanescent velocimetry to measure the polymer velocity in the first 70 nm from a solid substrate and made the first direct evidence of polymer slippage. This work led directly to the deGennes Brochard model of polymer slippage and was followed by a flourishing of slippage observations in complex fluids. With L. Leger & H. Hervet, P.G. de Gennes, F. Brochard

Publication: Slip transition of a polymer melt under shear stress

Polymer Solutions under Shear Studied the correlation between stress overshoots in sheared polymer solutions and the amplitude of concentration fluctuations. With D. Pine

My thesis research with Robert B Meyer concerned pattern formation in nematic liquid crystals. It was so long ago I can't really remember it, but it generated some really cool pictures :)=

In this work, we develop a simple model to determine the upper bound of feed rates that do not cause jamming in materials extrusion based additive manufacturing
A longstanding goal in polymer rheology is to develop a physical picture that relates the growth of mechanical moduli during polymer crystallization to that of
Laser sintering (LS) of polyamide 12 (PA12) is increasingly being adopted for industrial production of end-use parts, yet the complexity of this process coupled
It was experimentally demonstrated by Migler and his collaborators [Phys. Rev. Lett. 2001, 86, 1023; Langmuir 2003, 19, 8667] that a strongly confined drop
The development of biocompatible polymer nano-composites from renewable sources is a longstanding goal in sustainable materials. When the matrix is semi
END_OF_DOCUMENT_TOKEN_TO_BE_REPLACED
Polymers Processing Group
kalman.migler@nist.gov
(301) 975-4876