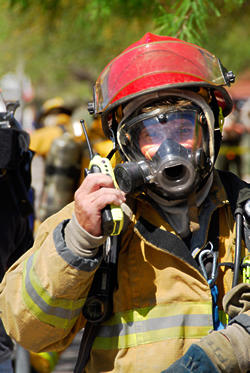 Credit: ©John Sartin/Shutterstock
Today, nearly a decade after the Sept. 11, 2001, terrorist attacks and more than five years after the devastation inflicted by hurricanes Katrina and Rita, the United States still lacks a wireless interoperable network capable of linking public safety organizations and workers; public responders alone number about 4 million nationwide. The President's Wireless Innovation and Infrastructure Initiative (WI3) proposes to reallocate a total of 500 megahertz of federal agency and commercial spectrum bands over the next 10 years. The auctions of reallocated spectrum licenses are expected to raise more than $27 billion by 2021.  Part of this expected revenue will be invested to accomplish three important goals: expanding access to wireless broadband in rural America, building a broadband network for public safety, and spurring U.S. competitiveness by funding development of cutting-edge wireless technologies.

NIST's component of this initiative is the Public Safety Innovation Fund, which is proposed to receive $100 million annually through fiscal year 2016 under a mandatory appropriation.  In this proposed five-year effort, NIST will partner with industry and public safety organizations on research, development, and demonstration activities aimed at new standards, technologies, and applications that will advance public-safety communications.

The overriding objective is to build a broadband system to allow first responders and other public safety personnel anywhere in the nation to send and receive data, voice, and other communications to save lives, prevent casualties, and avert acts of terror.

The technological challenges that stand in the way are significant.  The public safety system that is envisioned must cover nearly 95 percent of the U.S. population and 90 percent of the nation's geographic area.  System availability should be 90 percent at the minimum, even under the worst of circumstances.  Besides stringent coverage and availability requirements, public safety considerations impose other demanding specifications that greatly exceed the requirements of the commercial market, including mission-critical voice services, enhanced security requirements, unique applications, and specialized testing needs. These requirements will be difficult to achieve and to maintain.  Current market forces are insufficient to drive the research and development efforts needed to accomplish the transformation in public safety communication technologies and capabilities.

The Public Safety Innovation Fund will enable NIST to:

Benefits and impacts expected to result from this newly proposed program and the collaborative efforts it will support include: