SI stands for the International System of Units, also known as the metric system.

On November 16, 2018, in Versailles, France, a group of 60 countries made history. With a unanimous vote, they dramatically transformed the international system that underpins global science and trade. This single action finally realized scientists’ 150-year dream of a measurement system based entirely on unchanging fundamental properties of nature.

On that day, the International System of Units, informally known as the metric system — the way in which the world measures everything from coffee to the cosmos — changed in a way that is more profound than anything since its establishment following the French Revolution.

It was a turning point for humanity.

The SI — the modern metric system — has seven base units from which all other measurement units can be derived. On May 20, 2019, four of them — the kilogram, kelvin, ampere and mole — were redefined in terms of constants of nature. The remaining three — the second, meter, and candela — are already based on universal constants.

Click on the SI symbols below for more information.

After decades of groundbreaking laboratory work, the world’s scientific and technical community has redefined four of the seven base units for the International System of Units (SI). A vote to adopt the change happened on November 16, 2018, at Versailles, France, and the change went into effect on May 20, 2019. 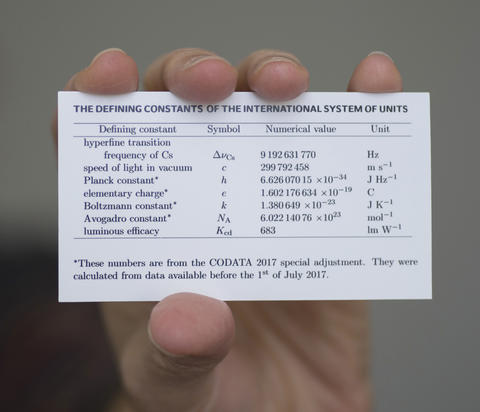 The units in the revised SI are based completely on seven unchanging quantities or “universal constants,” including the speed of light, the amount of electric charge in an electron, and the Planck constant. Learn more about each of these “invariants of nature” and how they come into play in the revised SI.