The Standard Reference Materials Program of the National Institute of Standards and Technology (NIST) provides science, industry, and government with a central source of well-characterized materials certified for chemical composition or for some chemical or physical property. These materials are designated Standard Reference Materials (SRMs) and Reference Materials (RMs), and are used to calibrate measuring instruments, to evaluate methods and systems, and to produce scientific data that can be referred readily to a common base. The NIST Radioactivity Group of the Radiation Physics Division conducts a variety of programs in standards development, calibration services, traceability testing, and basic research to meet the requirements for new standards in radionuclide metrology, environmental monitoring, and nuclear medicine. Many research efforts lead to the development of unique radioactivity standards and measurements, which are transferred to industry via SRMs, calibration services, comparative measurements, and traceability testing programs.

NIST radioactivity SRMs represent the national basis for accurate radioactivity measurements. SRMs for radioactivity measurements can typically be classified into three general categories: (1) environment and nuclear power, (2) medicine, and (3) basic and applied research using or involving radioactivity in the development of nuclear data and the examination of basic nuclear processes. Since the beginning of the nuclear age, the importance of accurate radioactivity measurements has been recognized, especially in the development of nuclear power and nuclear medicine. Up until the 1940's, the major concern of physicists was the establishment of the physics and chemistry of nuclear processes. Therefore, the need for radioactivity measurements with higher accuracy became more urgent. Although some rudimentary metrology, as we now think of it, had been performed before the late 1940's, the development of a metrology-based discipline began around 1950. The coincidence counting technique, although dating back decades, was developed into a primary measurement method by taking advantage of improvements in electronics and counting system design. The coincidence counting method became the cornerstone of the international measurement system for radioactivity, to which virtually all other indirect methods were referred. During the 1950's, the basic calibration factors for many radionuclides were established and retained on a stable and accurate ionization chamber at NIST (then NBS).With this set of definitive calibration factors, it was possible to begin assessing the accuracies of measurements made by users in commerce and research. This assessment was first done primarily in nuclear medicine and later moved into the nuclear power and environmental areas. NIST radioactivity measurements are compared with the primary standards of other National Metrology Institutes (NMIs) world-wide through the International Bureau of Weights and Measures (BIPM) which organizes and analyses the measurements. The results of such International Comparisons, as well as an extensive data file of NIST Calibration and Measurement Capabilities (CMCs), may be found on the BIPM website at www.bipm.org.

Collaborations between NIST and the nuclear communities have resulted in many of the NIST traceability testing and measurement assurance programs. Participants include federal regulatory agencies, radiopharmaceutical manufacturers, commercial suppliers of calibration sources and services, and the nuclear power industry. One of the oldest and most important collaborations is the joint program with NRMAP, Inc. (formerly NEI). This program provides SRMs and other standards for quality control in the nuclear medicine and nuclear power industries.In the NIST Radiochemistry Intercomparison Program (NRIP), participants receive aqueous solutions, glass fiber filters, artificial urine and fecal materials, and soil that have been certified for strontium-90, uranium-234, uranium-238, plutonum-238, and americium-241 at levels as low as 0.03 Bq per sample. 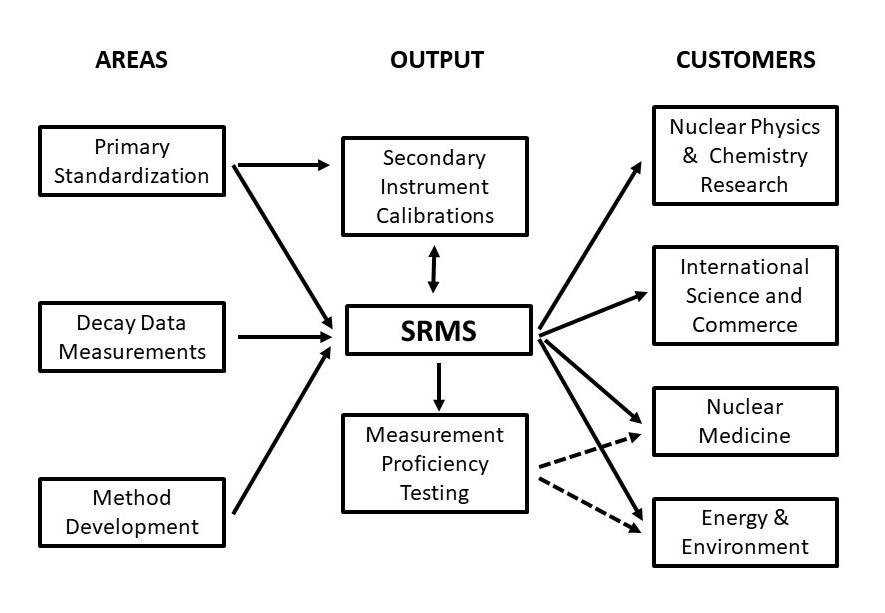 SRMs for Natural Matrix
The NIST natural matrix SRMs are a result of a collaboration of national and international environmental measurement laboratories. These natural matrix SRMs are distributed as ground, homogenized powders of soils, sediments, and organic materials and are characterized for as many as 20 radionuclides at environmental levels.

SRMs for Basic Applied Research
NIST issues a wide array of SRMs for radioactivity measurements. Typically there are 60 such SRMs in stock and calibrations have been performed on approximately 80 radionuclides. Uncertainties of these calibrations are typically 2 percent or less. These calibrations are performed using approximately 40 radiometric and a few mass spectrometric methods. The SRMs are issued in a number of configurations including gamma ray point sources mounted between thin plastic sheets, acidic solutions of alpha, beta, gamma, and x-ray emitting radionuclides, and natural matrix materials. NIST radioactivity measurements (SRMs, calibrations, etc.) are intercompared with the primary standards of other national metrology laboratories world-wide through the International Bureau of Weights and Measures (BIPM) which organizes and analyses the measurements.

SRMs for Nuclear Medicine
The Radioactivity Group, which is part of the NIST Physical Measurement Laboratory, prepares the radioactivity SRMs listed. Some of these SRMs are of short half-life (indium-111, iodine-131, molybdenum-99, technetium-99m, etc.) and are available only at certain announced times.

Recently Produced Radioactive SRMs
Radioactive SRMs are developed to fulfill a community need. This need for a new or renewed SRM largely derives from advice from the radioactivity user community. Interactions with this community include annual meetings, the NRMAP, Inc. steering committees, focused workshops and personal interactions with users within other laboratories, academia and industry.