Nanotube metrology improvement is a significant effort in the Particles, Tubes and Colloids project dedicated to improving the measurement methods for, and fundamental understanding of, single-wall carbon nanotubes (SWCNTs). Our strategy is based on the identification and improvement of separation methods for isolating sub-populations of nanotubes with selected attributes, such as the nanotube length, chemical species (i.e. chirality), enatiomeric handedness, or purity (chemical or morphological), followed by intensive characterization of these isolated materials. Utilizing resolved sub-populations allows for clear determination of the nanotube intrinsic properties and extrinsic dependencies on physical parameters, and how those properties are captured by various measurement methodologies. Our results are used to produce research publications, documentary standards on how to measure important characteristics, and NIST reference materials.
Collectively these outputs contribute to the foundation of commerce for SWCNT, and SWCNT containing, materials. SRM 2483, a certified homogenous reference material for SWCNT soot, and RM 8281, a set of aqueous nanotube dispersion of different average lengths are available through the NIST SRM office.

Exciting postdoctoral research opportunities are available in this project through National Research Council Fellowships. Please contact us for more details.

Single-wall carbon nanotubes (SWCNTs) are a tubular form of carbon consisting of a single shell of sp2 bonded carbon with a nanometer scale diameter that have many predicted properties superior to other available materials. However, every production technique for SWCNTs produces many different species of SWCNTs (called chiralities, and defined by the vector with which a graphene sheet would be rolled to form the tube structure), with different lengths of those SWCNTs agglomerated in varied nanoscale to mesocale structures containing impurities both carbonaceous and from the catalyst. This fundamental polydispersity of SWCNT materials from production has vastly complicated the application of SWCNT materials for industrial use. To underlie technology development, measurement techniques and standards are necessary (so that everyone is speaking the same language), and technology for the isolation of purified nanotubes by the structural parameters that define their properties. This effort pursues both of these directions.

The properties of any SWCNT species are strongly linked to both the structure of the SWCNT, which defines whether a SWCNT is metallic or semiconducting (and its band gap), and its length, which primarily affects transport properties and collective behavior. These properties however are often dramatically affected by the local environment surrounding the SWCNT, and its aggregation state. Thus to characterize the intrinsic properties of any specific SWCNT species or length distribution, an initially polydisperse nanotube sample must be first purified of non-SWCNT carbon and metallic catalyst, as well as separated by diameter or length (or both) to achieve robust results. Characterization by optical methods (absorption, fluorescence, Raman scattering), conductivity measurements, microscopy or other techniques then yields specific results. 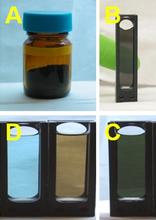 We achieve separation and purification of SWCNTs thorough the use of dispersants such as small molecule surfactants or biomolecules such as DNA, that modify the surface of the nanotubes and enable them to be individually isolated in an aqueous environment. We can then use a variety of different methods to separate SWCNTs non-destructively, utilizing handles such as differential bouyancy or differential adsorption determined by the dispersant-SWCNT combination, or fundamental colloidal physics. Recently, we have pioneered the use of aqueous two-phase polymer extraction methods to enable a great leap in ease and scale of separation. The separated populations can then be used for fundamental studies.

Our systematic focus on controlling the nanotube population in a sample through use and development of separation techniques differentiates the NIST effort in SWCNTs. Using well controlled populations ensures that we can accurately develop measurement techniques and characterize intrinsic SWCNT properties with greater confidence. Three main classes of separations are currently being used in the project, multi-stage aqueous two-phase extraction, chromatography based SWCNT species or hydrodynamic separations, and ultracentrifugation techniques exploiting density and hydrodynamic differences.

Our most recent efforts in SWCNT separation technologies have been in utilizing aqueous two-phase extraction (ATPE) methods to improve both diameter driven (species separation) and electronic type (semiconducting from metallic SWCNTs) separations. Results in both these areas and utilizing either DNA dispersed or surfactant dispersed SWCNTs were published in 2013 and 2014 in JACS and Advanced Materials. Continuing work is improving the quality of these separation and the increasing the scope and scale of their applicability. Licensing opportunities can be discussed through the NIST Technology Transfer Office.

Ming Zheng is the developer of, and world leader in, the separation of DNA dispersed SWCNTs through chromatography. Two modes of separation are commonly possible using our method: separation of the DNA or surfactant dispersed SWCNTs by length is achievable through size exclusion chromatography, resulting in narrow and reproducible length fractions; direct separation of single SWCNT species from mixed populations is achievable using specific DNA sequences and ion exchange chromatography.
Results of this work have been pulished in Nature, the Journal of the American Chemical Society and Analytical Chemistry (and other journals) highlighting specific extraction of individual semiconducting nanotube species, individual metallic nanotube species, and length separation respectively.

Jeff Fagan is among the world leaders in ultracentrifugation based separations of SWCNTs. Through controlling parameters of the dispersed nanotubes and the medium, particularly their densities, separations can be driven for different SWCNT species, SWCNT length, whether the SWCNTs are empty or are water-filled, and for separating ideal rods from morphologically defective rods. Many of these separations have been translated to rate-zonal methodologies that allow mass throughput well beyond earlier methods. These results have been published in journals such as Advanced Materials, Langmuir, and ACS Nano.