This project supports the microwave, telecommunications, computing, and emerging nanoelectronics industries through research and development of high-frequency microwave metrology for micrometer-scale and nanoscale electrical devices. This requires the development of microwave metrology in rectangular waveguide and printed transmission lines to 750 gigahertz and pulsed metrology in coaxial, rectangular waveguide, and on-wafer transmission lines to 400 gigahertz for microwave signal and signal source characterization, wireless systems, high-speed microprocessors, and high-speed nanocircuits and interconnects, and the telecommunications industry. The work is interdisciplinary and relies on strong collaborative efforts with the Optoelectronics Division.

Customer Needs
The rapid advance in the speed of modern telecommunications and computing systems drives this project. Characterizing signal integrity in microprocessors requires at least 10 gigahertz of calibrated measurement bandwidth on structures fabricated on a nanoscale. Limited available bandwidth is pushing wireless systems into the millimeterwave region of 30 to 100 gigahertz, where accurate microwave signal and signal source characterization is difficult. Optical links operating at 40 gigabits per second require electrical metrology to 110 gigahertz. Emerging high-speed digital circuits with clock rates of over 100 gigahertz require electrical metrology to 400 gigahertz. These extraordinary advances in technology require new highspeed coaxial and on-wafer microwave signal and waveform measurements. Because the speed of the devices is often linked to size, it is important to develop this high-speed metrology at both conventional IC and nanoscale dimensions and at both conventional and high impedances.

Technical Strategy
Coaxial connectors pose insurmountable economic hurdles for high-speed telecommunications and computing. For example, a single coaxial adapter that supports frequencies to 110 gigahertz costs upwards of $1000. This project focuses on the only feasible alternative: high-speed on-wafer metrology. The project's initial focus on developing metrology for on-wafer network analysis for MMICs has been expanded to include metrology for silicon ICs and differential interconnects. More recently the project has further expanded the focus to noninvasive probing on a nanoscale and to ultra-high-speed modulated microwave signal, signal-source, and waveform characterization. 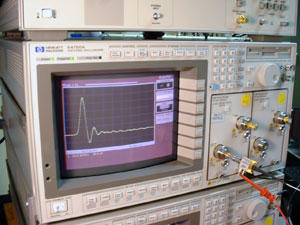 The project focuses on extending fundamental microwave and on-wafer metrology to higher frequencies and to modulated signals and waveforms. Working together with PML's Optoelectronics Division, we have developed a fully calibrated electrooptic sampling system for characterizing photodetectors and calibrating oscilloscopes for microwave signal characterization. This has set the foundation for a number of new developments in microwave metrology, including: modulated microwave signal and coaxial signal-source characterization to 110 gigahertz, verifying the 3-mixer calibration, and performing electro-optic on-wafer scattering and waveform measurements beyond 110 gigahertz. This fundamental metrology tool will be crucial to bringing a new generation of calibrated high-frequency oscilloscopes, MTAs, and related instruments to the microwave engineer's workbench.

Whenever possible, we are extending the use of these instruments directly to the wafer level. We are not only developing calibration procedures for today's high-performance electrical probes, but we are also laying the foundations for 200 gigahertz to 400 gigahertz calibrations for tomorrow's probes. We are also developing techniques for performing noninvasive high-impedance on-wafer waveform measurements for signal-integrity characterization in digital silicon ICs and other small circuits. This effort is particularly important for the development of electrical metrology for nanoscale devices, which, due to their small sizes, have extremely high electrical impedances.

Our plan is to electrically characterize an active high-impedance probe with our existing VNA calibration methods. We will then characterize the same probe on our 200-gigahertz-bandwidth EOS system. This will lay the groundwork for very-highspeed on-wafer calibrations for digital IC and nanoelectronics. We will develop joint time-domain/frequency-domain uncertainty analysis for coaxial photodiode pulse sources. The calibration and uncertainty representation will include imperfections in the electro-optic sampling system and electrical mismatch corrections, and will be suitable for calibrating oscilloscopes with coaxial ports in either the time or frequency domains to 110 gigahertz. We will develop pulse sources with 400 gigahertz bandwidth. Based on these sources, develop on-wafer waveform characterization ability to 400 gigahertz. We will apply high-speed waveform metrology to microwave problems, including the characterization of electrical phase standards, microwave sources, and microwave mixers.