Beamline 1 separates a swath of light from the synchrotron into two parts. The first part is collected in Beamline 1a by a normal-incidence multilayer mirror. The mirror focuses the EUV onto a sample held in a chamber into which gases such as water or sulfides can be introduced. This was the first synchrotron-based facility in the world dedicated to the study of multilayer mirror degradation in the presence of EUV radiation and trace chemical species. This beamline is similar to Beamline 8, but it is used for "stickier" gases, so is not ultrahigh vacuum. The second part is sent into Beamline 1b by a grazing-incidence toroidal mirror that focuses the EUV onto a "witness" sample held in a separate chamber. The chamber contains also a silicon wafer that is coated with photoresist. The degradation of EUV mirrors caused by photoresist outgassing is measured by exposing the wafer as well as the witness sample to the EUV beam.

The multilayer mirror reflects radiation in a narrow band around 13 nm, sends it through a thin-film filter, and focuses it into a sub-mm spot onto the sample. The sample may be a bulk material, thin-film or multilayer on a substrate, or freestanding thin film. Trace gases are bled into the chamber at pressures between 10-8 mbar and 10-5 mbar, and the filter is captured in the gate of a gate valve to isolate the bleeding gas from the multilayer mirror. Samples are generally exposed to a few tens or hundreds of joules fluence.

This beamline also has the ability to vary sample temperature from room temperature to 200 °C.

The degradation (carbon growth from organics or oxidation from water) is measured ex-situ using ellipsometry, x-ray photoemission, and Auger depth profiling. Figure 1 shows spectroscopic ellipsometry results on a film of zirconium that was exposed to 60 J EUV in the presence of 10-6 mbar water vapor at temperatures of 25 °C, 50 °C, 100 °C, and 150 °C.

This simple design of this beamline allows for rapid reconfiguration, which has been done several times. In addition to endurance testing, it has been used to measure amount and composition of photoresist outgassing, photoresist sensitivity, and fundamental chemical processes in photoresists.

The toroidal mirror reflects radiation from SURF so that it travels through a silicon filter, reflects from witness sample mirror, reflects from a second relay mirror, and finally shines on a 200 mm diameter silicon wafer that is coated with photoresist. The silicon filter protects the toroidal mirror from contamination, and it narrows the wavelengths of the incoming synchrotron radiation into a band from about 12 nm to 30 nm. The subsequent reflections from the sample and relay mirrors, which are Mo-Si multilayers, further narrow the wavelength range to around 13.5 nm and direct a small spot onto the 200 mm silicon wafer. The resist-coated wafer is rotated and translated so that the EUV spot exposes the entire wafer to a uniform dose. Instrumentation in the chamber includes an ion gauge to measure total pressure, a residual gas analyzer (RGA) to measure the partial pressures of the outgas species, a calibrated photodiode to measure the EUV intensity on the wafer, and six thermometers that are used to control the temperature of the chamber walls. 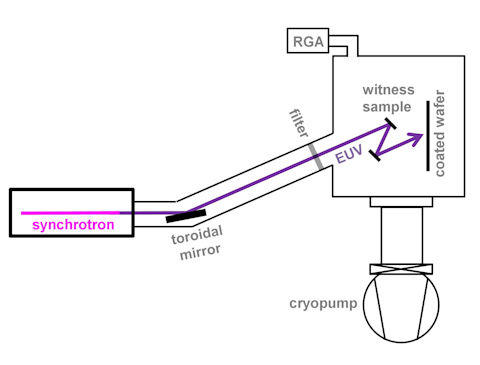