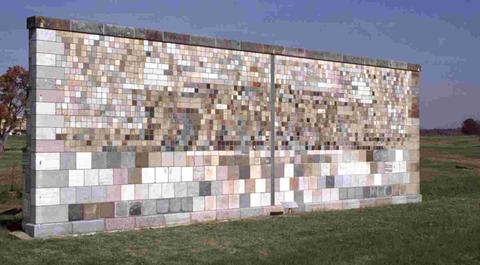 The stone test wall was constructed  to study the performance of stone subjected to weathering. It contains 2352 individual samples of stone, of which 2032 are domestic stone from 47 states, and 320 are stones from 16 foreign countries. Over 30 distinct types of stones are represented, some of which are not commonly used for building purposes. There are many varieties of the common types used in building, such as marble, limestone, sandstone, and granite.

This site presents the existing data and pictures for each  particular stone.

In 1880 the Census Office and the National Museum in Washington, D.C. conducted a study of building stones of the United States and collected a set of reference specimens from working quarries. This collection was first displayed at the centennial exposition in Philadelphia in 1876 and was subsequently known as the Centennial Collection of U.S. Building Stones. Descriptions of producing quarries and commercial building uses in construction across the country were compiled for the report of the 10th Census of the United States in 1880. This collection of stones, augmented with building stones from other countries, was then placed on display in the Smithsonian Institution.

In 1942, a committee was appointed to consider whether any worthwhile use could be made of the collection. It was decided that a study of actual weathering on such a great variety of stone would give valuable information. A plan was developed for building a test wall at the National Bureau of Standards (NBS) as a cooperative study between NBS and ASTM Committee C-18 on Building Stone. In 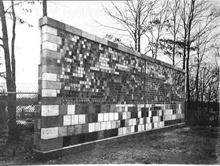 1948, a test wall was constructed at the NBS site in Washington D.C. The upper picture was taken one month after erection at the original site.

The wall was placed in jeopardy by the move of NBS to Gaithersburg, MD in the middle 1960s and the occupancy of the old NBS site by the University of the District of Columbia. The wall was moved intact in May 1977 to its present site at NBS (now the National Institute of Standards and Technology (NIST)) in Gaithersburg, MD. The following pictures were taken at the Gaithersburg site at the end of 1999.  The wall provides a rare opportunity to study the effects of weathering on different types of stones, with the climatic conditions being the same for all stones. It offers a comparative study of the durability of many common building stones used in monuments, and commercial and government buildings. The wall also serves to preserve a valuable collection of building stone and should be useful as a reference for builders in identifying the kinds of stones that may be locally available. As the wall is approaching 60 years of age, interesting degradation features are being observed.

After fifty years, during 1998, the Inorganic Building Materials Group of the Engineering Laboratory (formerly BFRL) in NIST initiated a project to document and evaluate the changes due to weathering. Sponsored by the NCPPT(National Center for Preservation Technology and Training), the project consisted of photographing the wall and archive specimens, and building a database to organize and provide easy access to the data. This database will be updated as new data become available, through microscopic investigation of mineralogy, texture and stone performance, imaging of existing buildings constructed with these specific stones, and any other research related to the stones.