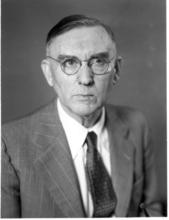 The construction of the wall in 1948 was directed by Daniel W. Kessler, Chief of the Building Stone Section of the NBS Mineral Products Division. D.W. Kessler received a B.S. degree in civil engineering in 1908 from the University of Missouri and a C.E. degree in engineering and geology in 1921 from George Washington University. In 1950 Mr. Kessler was given an ASTM award of merit and citation for his service and expertise in the field of natural stone and their utilization in the construction and abrasive industries.

Dr. James R. Clifton continued the work monitoring the condition of the wall from the 1970's through the late 1990's. His efforts were key in saving the wall after the move of NIST from the Washington D.C. to the Gaithersburg location. As leader of the Inorganic Materials Group of the Building and Fire Research Laboratory, he was a noted researcher on the performance and service life of inorganic building materials, concrete, corrosion of steel in concrete, masonry, preservation of stone, and adobe.

The Stone Wall Test Web Site was authored by Jaime Raz and Paul Stutzman in the Inorganic Group of the Building Materials Division.

The design and construction of the site was done by Jaime Raz during his sabbatical leave at NIST. Jaime Raz received a B.Sc. in Chemical Engineering in 1980, M.Sc.. in Chemical Engineering in 1986 and a M.B.A. Executive in 1998 from the Ben-Gurion University, Beer-Sheva Israel. He is a Research and Project Manager at the Israel Atomic Commission, Nuclear Research Center, Negev, Israel.

The Stone Test Wall project is directed by Paul Stutzman as part of his research work at NIST. Paul Stutzman received an A.B. in Geology from Hanover College and a M.S. in Geology from Southern Illinois University. At the National Institute of Standards and Technology (NIST), Mr. Stutzman operates the Building and Fire Research Laboratory's microstructure laboratory. His research interests include the microstructural characterization of cement clinker, high performance concrete, mortar, and dimension stone.

Acknowledgment:
The authors want to thank all the people who contributed to the construction of the project and especially: Romayne Hines for her help on entering and revising the database data, John Winpigler for his help on taking the pictures of the wall, and Darren Lowe for technical support for Web and network issues.