These photo's show (photo's a and b) a stone carver (Heleman Ferguson) using the SP2 (String Pot 2) system to assist measurement to the potential sculpture surface of a mathematical function and (photo c) the result of the carving. The SP 2 system includes a triangular aluminum frame (Work Platform) surrounding the operator while serving as handles, a tool (hammer-drill or chisel) holder, and a digital display holder. Attached to the ceiling are 3 pairs of string-potentiometers (Reference Frame) with steel, semi-toroidal, cable-guides. The string-potentiometer strings are used to suspend the Work Platform in a Stewart Platform Parallel Link Manipulator configuration. The controller, desktop computer housing input and output computer boards, inputs the six analog string-pot signals and outputs serial information (measurements) to the digital display. The software algorithm running on the computer receives input from the operator including a 3-D mathematical function to be uncovered in stone or other materials. The algorithm also includes the SP2 system kinematics and separation distance of the Reference Frame string-pot. pairs. It then calculates the pose of the Work Platform and tool tip with respect to the Reference Frame and outputs a distance to the mathematical function.

The operator standing inside the Work Platform, points the tool at the potential surface while the digital display shows the operator how much further to drill to the sculpture surface. Upon drilling several holes in the stone block, the operator then switches tools and chisels away the drilled material leaving a rough approximation of the sculpture. The process can be repeated as needed. The surface is then approached closer and closer with the chisel to "uncover" the expected sculpture from the stone block. 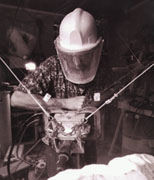