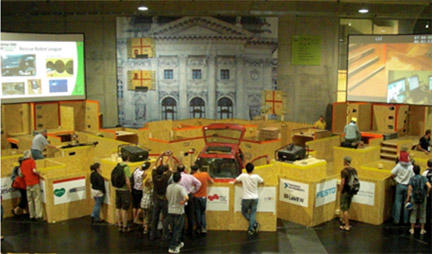 The RoboCupRescue Robot League is an international league of teams with one objective: Develop and demonstrate advanced robotic capabilities for emergency responders using annual competitions to evaluate, and teaching camps to disseminate, best-in-class robotic solutions.

The league hosts annual competitions to 1) increase awareness of the challenges involved in deploying robots for emergency response applications such as urban search and rescue and bomb disposal, 2) provide objective performance evaluations of mobile robots operating in complex yet repeatable environments, and 3) promote collaboration between researchers. Robot teams demonstrate their capabilities in mobility, sensory perception, localization and mapping, mobile manipulation, practical operator interfaces, and assistive autonomous behaviors to improve remote operator performance and/or robot survivability while searching for simulated victims in a maze of terrains and challenges. Winning teams must reliably perform 7-10 missions of 20-30 minutes each from various start points to find the most victims. As robots continue to demonstrate successes against the obstacles posed in the arenas, the level of difficulty will continually be increased so the arenas provide a stepping-stone from the laboratory to the real world. Meanwhile, the annual competitions provide direct comparison of robotic approaches, objective performance evaluations, and a public proving ground for capable robotic systems that will ultimately be used to save lives.

When disaster happens, minimize risk to search and rescue personnel while increasing victim survival rates by fielding teams of collaborative mobile robots which enable human rescuers to quickly locate and extract victims. Specific robotic capabilities encouraged in the competition include the following:

These tasks are encouraged through challenges posed in the arena, specific mission tasks, and/or the performance metric. Demonstrations of other enabling robotic capabilities are always welcome.

A building has partially collapsed due to earthquake. The Incident Commander in charge of rescue operations at the disaster site, fearing secondary collapses from aftershocks, has asked for teams of robots to immediately search the interior of the building for victims. The mission for the robots and their operators is to find victims, determine their situation, state, and location, and then report back their findings in a map of the building with associated victim data. The section near the building entrance appears relatively intact while the interior of the structure exhibits increasing degrees of collapse. Robots must negotiate and map the lightly damaged areas prior to encountering more challenging obstacles and rubble. The robots are considered expendable in case of difficulty.

The RoboCupRescue arenas constructed to host these competitions consist of emerging standard test methods for emergency response robots developed by the U.S. National Institute of Standards and Technology through the ASTM International Committee on Homeland Security Applications; Operational Equipment; Robots (E54.08.01). They are repeatable test method apparatuses that anybody can build and practice. The competition field is divided into color-coded arenas that form a continuum of challenges with increasing levels of difficulty for robots and operators and highlight certain robotic capabilities:

The RoboCupRescue Robot League encourages participation by interested organizations from around the world, but limits participation to one team per organization. Regional open competitions are hosted around the world to provide essential practice deployment experience for teams and to support qualification of teams for the World Championship competition each year. The World Championship includes a maximum of 5 teams from each regional open competition, which are typically the three awardees and up to two more teams based on the previous year's awards, Best-In-Class demonstrations in the current year, and other considerations noted below.

Each year the Technical Committee looks at the following criteria to qualify teams for the World Championship:

Finally, some qualifications for the World Championship may be granted by the Technical Committee to include particular countries in the league, encourage technologies that the league should be investigating, or to support other league outreach efforts.