On the evening of June 18, 2007, a fire occurred in the Sofa Super Store in Charleston, SC that resulted in the deaths of nine fire fighters. NIST analyzed the fire ground, consulted with other experts, and performed computer simulations of fire growth and fire protection alternatives. This program training module for Certified Fire Investigators (CFI) focuses on the fire analysis portion of the NIST technical investigation. Recommendations based on NIST's simulation of events are also presented.

Nelson Bryner, the lead researcher on the study, provides an overview of the incident including a discussion of the building and fuel load, the timeline relative to the spread of the fire, and how the fire ground tactics played a role in the fire spread. The importance of fire prevention programs, such as building inspections, and fire protection systems, such as automatic fire sprinklers are also discussed. To view the program go to www.cfitrainer.net.

NIST has collaborated with IAAI in the development of several programs currently available on CFITrainer.Net® including Introduction to Fire Dynamics and Modeling and An Analysis of the Station Nightclub Fire.

The complete text of NIST's final report, Volumes I and II,* may be downloaded as Adobe Acrobat (.pdf) files. For a detailed summary of the Sofa Super Store study, its findings and recommendations, and links to supporting materials such as graphics and video segments from computer simulations of the fire, go to "NIST Study on Charleston Furniture Store Fire Calls for National Safety Improvements" at www.nist.gov/el/fire_research/charleston_102810.cfm. 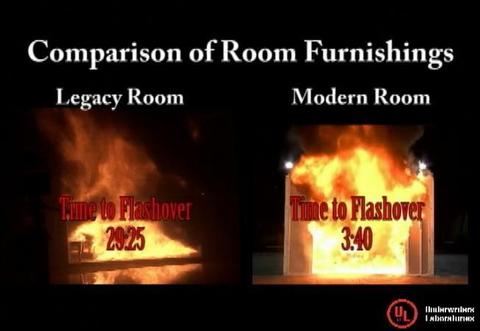 Under the United States Department of Homeland Security (DHS) Assistance to Firefighter Grant Program, Underwriters Laboratories examined fire service ventilation practices as well as the impact of changes in modern house geometries. There has been a steady change in the residential fire environment over the past several decades. These changes include larger homes, more open floor plans and volumes and increased synthetic fuel loads. This series of experiments examine this change in fire behavior and the impact on firefighter ventilation tactics. This fire research project developed the empirical data that is needed to quantify the fire behavior associated with these scenarios and result in immediately developing the necessary firefighting ventilation practices to reduce firefighter death and injury.

The results of these experiments provide knowledge for the fire service to examine their standard operating procedures and training content. Several tactical considerations were developed utilizing the data from the experiments to provide specific examples of changes that can be adopted based on a departments current strategies and tactics.

View the entire article for more information, including a short video, an online training program, and the full report. To learn more about UL and the Fire Service, visit www.ul.com/fireservice.

NIST Releases Final Report on Charleston Sofa Super Store Fire (3/15/2011) The National Institute of Standards and Technology (NIST) has released its final report on its study of the June 18, 2007, fire at the Sofa Super Store in Charleston, S.C., that trapped and killed nine firefighters, the highest number of firefighter deaths in a single event since 9/11. The final report is strengthened by clarifications and supplemental text based on comments provided by organizations and individuals in response to the draft report of the study, released for public comment on Oct. 28, 2010.

The revisions did not alter the study team's main finding: the major factors contributing to the rapid spread of the fire at the Sofa Super Store were large open spaces with furniture providing high-fuel loads, the inward rush of air following the breaking of windows, and a lack of sprinklers.

Based on its findings, the study team made 11 recommendations for enhancing building, occupant and firefighter safety nationwide. In particular, the team urged state and local communities to adopt and strictly adhere to current national model building and fire safety codes. These codes are used as models for building and fire regulations promulgated and enforced by U.S. state and local jurisdictions. Those jurisdictions have the option of incorporating some or all of the code's provisions but often adopt most provisions.

If today's model codes had been in place and rigorously followed in Charleston in 2007, the study authors said, the conditions that led to the rapid fire spread in the Sofa Super Store probably would have been prevented.

Specifically, the NIST report calls for national model building and fire codes to require sprinklers for all new commercial retail furniture stores regardless of size, and for existing retail furniture stores with any single display area of greater than 190 square meters (2,000 square feet). Other recommendations include adopting model codes that cover high fuel load situations (such as a furniture store), ensuring proper fire inspections and building plan examinations, and encouraging research for a better understanding of fire situations such as venting of smoke from burning buildings and the spread of fire on furniture.

Two of the recommendations in the draft report were slightly modified to increase their effectiveness. The recommendation "that all state and local jurisdictions ensure that fire inspectors and building plan examiners are professionally qualified to a national standard" was improved by listing three nationally accepted certification examinations as examples of "how professional qualification may be demonstrated." Another recommendation has been enhanced by urging state and local jurisdictions to "provide education to firefighters on the science of fire behavior in vented and non-vented structures and how the addition of air can impact the burning characteristics of the fuel."

NIST is working with various public and private groups toward implementing changes to practices, standards, and building and fire codes based on the findings from this study.

The complete text of the final report, Volumes I and II,* may be downloaded as Adobe Acrobat (.pdf) files. For a detailed summary of the Sofa Super Store study, its findings and recommendations, and links to supporting materials such as graphics and video segments from computer simulations of the fire, go to "NIST Study on Charleston Furniture Store Fire Calls for National Safety Improvements" at www.nist.gov/el/fire_research/charleston_102810.cfm. 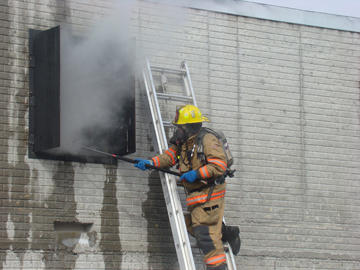 (4/28/2010) A landmark study issued in April by the U.S. Department of Commerce's National Institute of Standards and Technology (NIST) shows that the size of firefighting crews has a substantial effect on the fire service's ability to protect lives and property in residential fires.