Wind blowing into the broken window of a room on fire can turn a "routine room and contents fire" into a floor-to-ceiling firestorm. Historically, this has led to a significant number of firefighter fatalities and injuries, particularly in high-rise buildings where the fire must be fought from the interior of the structure.

Wind-Driven Fire in a Ranch-Style House in Texas, 2009

On April 12, 2009, a fire in a one-story ranch home in Texas claimed the lives of two fire fighters. Sustained high winds occurred during the incident. The winds caused a rapid change in the dynamics of the fire after the failure of a large section of glass in the rear of the house.

NIST performed computer simulations of the fire using the Fire Dynamic Simulator (FDS) and Smokeview, a visualization tool, to provide insight on the fire development and thermal conditions that may have existed in the residence during the fire.

The FDS simulation that best represents the witnessed fire conditions indicates that the fire that spread throughout the attic and first floor developed a wind driven flow with temperatures in excess of 260 °C (500 °F) between the den and front door. The critical event in this fire was the creation of a wind-driven flow path between the upwind side of the structure and the exit point on the downwind side of the structure, the front door. The flow path was created by the failure of a large span of windows in the den, in the rear of the structure. Floor-to-ceiling temperatures rapidly increased in the flow path where multiple crews were performing interior operations. In a simulation that excluded wind, the flow path was not created, and the thermal environment surrounding the location of interior operations was improved. 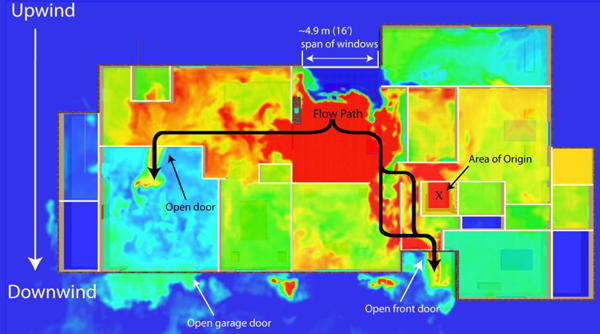 Still image from FDS simulation. Temperatures at 1.5 m (5 ft) above the floor throughout the house 10 s after solarium failure. Image credit: NIST.

Wind has been recognized as a contributing factor to fire spread in wildland fires and large-area conflagrations and wildland fire fighters are trained to account for the wind in their tactics. While structural fire departments have recognized the impact of wind on fires, in general, the standard operating guidelines for structural fire fighting have not changed to address the hazards created by a wind driven fire inside a structure. The results of the "no-wind" and "wind" fire simulations demonstrate how wind conditions can rapidly change the thermal environment from tenable to untenable for fire fighters working in a single-story residential structure fire. The simulation results emphasize the importance of including wind conditions in the scene size-up before beginning and while performing fire fighting operations and adjusting tactics based on the wind conditions. These results are in agreement with NIST studies conducted to examine wind driven fire conditions in high-rise structures. (See 7-story building experiments below.)

Based on the analysis of this fire incident and results from previous studies, adjusting fire fighting tactics to account for wind conditions in structural fire fighting is critical to enhancing the safety and the effectiveness of fire fighters. Previous studies demonstrated that applying water from the exterior, into the upwind side of the structure can have a significant impact on controlling the fire prior to beginning interior operations. It should be made clear that in a wind-driven fire, it is most important to use the wind to your advantage and attack the fire from the upwind side of the structure, especially if the upwind side is the burned side. Interior operations need to be aware of potentially rapidly changing conditions.

See full report, Simulation of the Dynamics of a Wind-Driven Fire in a Ranch-Style House – Texas (NIST TN 1729, January 2012)

Together with the Fire Department of New York City (FDNY), the Polytechnic Institute of New York University, and with the support of the Department of Homeland Security Federal Emergency Management Agency Assistance to Firefighters Research and Development Grant Program and the United States Fire Administration, our researchers conducted a series of wind-driven fire experiments in a seven-story building on Governors Island, New York, in February 2008.

The objective of these experiments was to improve the safety of firefighters and building occupants by developing a better understanding of wind-driven fires and wind-driven firefighting tactics, including structural ventilation and suppression. The experiments evaluated the ability of positive pressure ventilation fans (PPV), wind control devices (WCD), and exterior water application via high rise nozzles (HRN), operated from the floor below to mitigate the hazards of a wind-driven fire in a structure.

Impact of PPV. PPV fans alone could not overcome the effects of a wind driven condition. However when used in conjunction with door control, WCDs, and FBNs the PPV fans were able to maintain tenable and clear conditions in the stairwell.

Impact of WCDs. In these experiments, the WCDs reduced the temperatures in the corridor and the stairwell by more than 50 % within 120 seconds of deployment. The WCDs also completely mitigated any velocity due to the external wind. The WCDs were exposed to a variety of extended thermal conditions without failure.

WHY IS THIS IMPORTANT?

These experimental results indicate that the post deployment thermal conditions for flow path control using a WCD, after the development of wind driven conditions, were still of a level which could pose a hazard to firefighters in full PPE. However, when used in combination with PPV fans to force cool air into the stairwell and out through the fire floor, and/or with the cooling effect from an externally applied water stream, the fire floor temperatures can be reduced to near ambient conditions in a matter of minutes.

The experiments also provided potential guidance for firefighters as a part of a fire size up and approach to the room of fire origin: note wind conditions in the area of the fire, look for "pulsing flames", or flames not exiting a window opening, examine smoke conditions around closed doors in the potential flow path, and maintain control of doors in the flow path. Even if flames are being forced out of adjacent windows with a high amount of energy, there could still be sufficient energy flows on the fire floor to create a hazard for firefighters.

The data from this research will also help to identify fire fighting strategies to improve standard operating guidelines (SOG) for the fire service to enhance firefighter safety, fire ground operations, and use of equipment. If the demonstrated technologies continue to prove effective in the field trials and pilot programs, the next step may be to examine the need for standards and standardized test methods to define a minimum level of acceptable performance of these devices.