Baldrige is Answer to How to Create the Culture You Need

Only one person on the planet can claim to have led three organizations to Malcolm Baldrige National Quality Awards. And he did it with a focus on people, purpose, passion, and a whole lot of role-model leadership.

Heer said he was first introduced to the Baldrige Health Care Criteria around 1996, “I read through the Criteria, and I thought, man, that’s how you run a great company.”

Despite being honored for his role-model leadership and commitment to advancing excellence, Heer said he hasn’t done it alone. In addition to thanking his wife, Polyanna, and God, thousands of employees helped him make excellence happen.

“One person can’t win the Baldrige Award,” he said, “It has to be an entire organization. From somebody sweeping the floor, to the cook back in the cafeteria, to the CEO, to the board. Everybody has to be involved, and I’ve worked literally with thousands of people over the years who I love dearly and really appreciate all of the effort they have put into really what I would call more than Baldrige. What I would call culture. . . . None of the organizations that I’ve been associated with ever really said, ‘We’re doing Baldrige.’ We were. But what we were really doing was creating a great culture. And if you look through the Baldrige Criteria and really study them, that’s what you’ll see, that it’s culture. That’s what Baldrige is all about.”

Through the 1990s and early 2000s, you rarely heard people talking about culture, even in Baldrige circles, he said; when Baptist Hospital was honored with the Baldrige Award in 2003, among seven organizational recipients that year, not one senior leader mentioned culture in acceptance speeches.

At the 2015 Baldrige Award ceremony in early April, every single person who came up on stage talked about culture, said Heer; “I think what we’re seeing is a big change in the business environment now. People are starting to realize how important culture is.”

But “as employers grasp its importance, they also realize that they have no clue where to begin in creating the culture that they need. And you know what my answer to that is, right here. Baldrige can help you create that kind of a culture,” he said. “We’ve got a recognition now that culture is extremely important, but then we’ve also got the recognition that a lot of people really don’t know what culture is or how to start to change it.”

Heer shared nist-quotes from Peter Drucker (“Culture eats strategy for breakfast.”) and Investopedia.com: “Corporate culture refers to the beliefs and behaviors that determine how a company's employees and management interact and handle outside business transactions. Often, corporate culture is implied, not expressly defined, and develops organically over time from the cumulative traits of the people the company hires.”

“Now think about that for just a second,” said Heer. “Does that scare you to think about a company that basically just lets things happen? They doesn’t really have a plan? '[Culture] develops organically over time'. . . . How many CEOs get fired from these companies? . . . [As we hire people] we’re finding what kind of culture we are actually creating in this company. That’s scary.”

Heer referred to a Fortune magazine article “How to Build the Perfect Workplace” by Geoff Colvin, who wrote, “The secret to attracting and holding on to the world’s best talent isn’t about the perks—it’s about relationships. . . . You’ve realized by now that we’re talking about culture, the way people behave from moment to moment without being told. More employers are seeing the connection from culture and relationships to workplace greatness to business success.”

Added Heer, “What’s most common among Baldrige Award winners and other role models is great culture and great people. Culture in a nutshell from my perspective is who you are, how you behave, your relationships." And he took it a step further, defining a servant culture: “A servant culture is a servant leader, servant-led employees, a servant environment designed to ensure that employees’ highest-priority needs are being met, with character that inspires confidence. [A servant culture is] mission-driven, vision-focused, values-centered, employee-centered, and customer-devoted.”

He said part of the servant culture focus on employees has to do with their great importance on the front-line. “So why is focusing on employees so important? This is a little tongue and check, but who is going to implement all of your great ideas? Who is going to make your products or deliver your services? Who is going to give great customer service? Who is going to control your costs? Who is going to help you grow your data and information? If you think about it, the front-line is what customers see. They don’t see what goes on in the leadership section. . . . [The front-line] makes a huge difference [on how customers view the organization.] Seriously. It’s the right thing to do. It’s about treating others the way that we want to be treated. Create a superior culture, which leads to dedicated employees and decreases turnover.” He added that in health care the costs to recruit, hire, train, and ensure a fully functioning new registered nurse total at least $40,000.

To be a servant leader, you have to be trusted, empowering, and respectful, and you have to ensure focus, discipline, execution, and, added Heer, a whole lot of prayer. 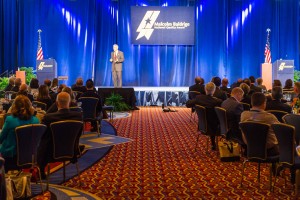 “It doesn’t sound like very complicated stuff does it?” he asked. “Then why do so many of us not do it. Create, monitor, measure. Reward and recognize champions. Coach low performers. You may have to move some senior leaders out of leadership or out of the organization.”

Heer summed up his vision of servant leadership, saying, “Imagine a workforce so engaged that they were giving you great ideas, they were innovating, they were willing to make the changes that you were trying to instate. . . . They create customer loyalty, higher-quality products and services. They actually participate and help with financial performance, and you can have growth because you’re doing all of those things well.”