The Nanomechanical Properties Group has expertise in a wide variety of SPM techniques, especially atomic force microscopy (AFM); however, the main research thrust for the Group’s SPMM&S project area deals with accurate cantilever stiffness calibration and the use and development of AFM methods for measuring the nanomechanical properties of surfaces.

The cantilever stiffness calibration effort is spearheaded by the use and development of the laser Doppler vibrometry cantilever thermal calibration method as a means of accurately determining the stiffness of AFM cantilevers.  This instrument, housed 12 m underground in our Group’s clean room facility is capable of making some of the most sensitive and accurate AFM cantilever stiffness measurements available.  It provides the technical underpinning for complementary Group efforts in AFM standards and method development.

A series of extremely uniform prototype reference cantilever arrays were created that can be used to calibrate the spring constants of atomic force microscopy cantilevers and other micromechanical structures. Nominal spring constants were estimated to be in the range of 0.02 Nm-1 to 0.2 Nm-1. Resonance frequency measurements were used to assess the uniformity of devices from different portions of a silicon-on-insulator wafer, and from different processing batches. Variations of less than 1% (relative standard deviation) in resonance frequency attested to the high degree of uniformity achieved. Independent calibration of cantilevers in an array using an electrostatic force balance indicated that the actual spring constants ranged from 0.0260 ± 0.0005 Nm-1 (±1.9%) to 0.2099 ± 0.0009 Nm-1 (±0.43%). The results confirmed the feasibility of creating uniform reference cantilevers and calibrating them using an SI-traceable technique, making these devices excellent candidates for small force calibration standards for AFM. An SRM production batch is currently in process. 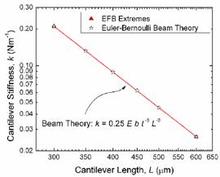 Agreement between stiffness measurements and models 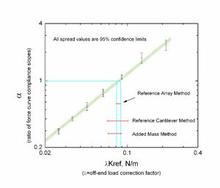 A new "Hammerhead" AFM cantilever has been developed that is capable of providing precise lateral force (e.g. friction) measurements on surfaces using a commercial instrument. The "wings" projecting from the sides of the cantilever are used along with a specially designed calibration chip that allows for precise determination of the optical torsional sensitivity of the photodetector, which is usually very difficult to measure. A production batch of reference material "Hammerhead" cantilevers is being developed and fabricated to make these devices available to the research community. 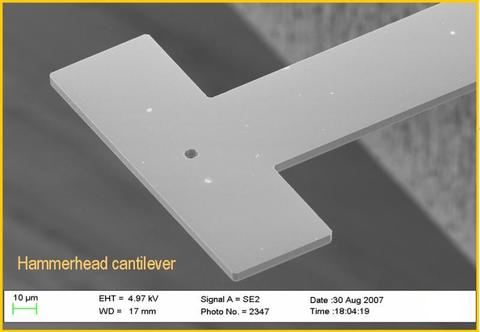 A dual reference method has been shown to be capable of extracting the modulus of a material within 3% of the calculated expected value, without any assumptions of the probe's mechanical properties.

Using this CR-AFM technique, select nanostructures have been studied to elucidate their nanomechanical properties. The most recent work included analysis of ZnO nanowires as small as 26 nm in diameter, and AlN nanotubes 200 nm in diameter but with wall thicknesses of only 19 nm. 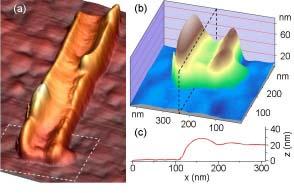