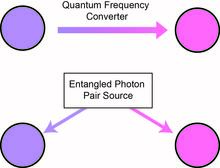 Quantum networking and distributed quantum sensing will require photonic links (so called flying qubits) to connect nodes and enable scaling to larger distances and network sizes. An interconnect may consist of a photon going from one node to another where both nodes operate at the same wavelength. However, in a heterogenous network where different nodes have different functions and different wavelengths, more complicated interconnects are needed.

We study quantum frequency conversion (QFC) where photons are converted from one optical wavelength to a different optical wavelength. QFC is a type of quantum transduction, where the latter refers to the conversion of quantum information from one format to another (for instance, conversion from an optical photon to a microwave photon). Efficient QFC has been shown in second- and third-order nonlinear materials. Our group typically studies second-order materials for QFC such as periodically poled lithium niobate (PPLN), as shown in Fig. 1.

The strong, classical pump used in QFC can produce unwanted noise photons that are identical in wavelength to the desired transduced photons. We have studied the processes that produce these noise photons. For instance, we showed the noise generation process is temperature dependent. By reducing the temperature of the PPLN crystal, we can reduce rate of production of noise photons (Fig. 2).

QFC also offers the opportunity to control and engineer the photons in a quantum network. For instance, we designed a PPLN waveguide that can convert input photons to photons at two possible output wavelengths (Fig. 3). Using this dual-channel device, we can route photons to different output paths, which is useful as a switch inside a quantum network.

Entangled photon pairs are produced by the process of spontaneous parametric downconversion (SPDC), where a higher-energy pump photon spontaneously splits into a pair of photons whose energies sum to the energy of the pump photon. The downconverted photon pair can have strong correlations in energy, arrival time, polarization and other degrees of freedom, which may be used for quantum entanglement. We study entangled photon pair sources for use in quantum networking, quantum communications and quantum sensing.

We demonstrated a polarization-entangled photon pair source based on a phase-modulated PPLN crystal. Pumped at 775 nm, the downconverted photons are generated at 1530 nm and 1569 nm. The phasematching conditions for [H1530nm, V1569nm] and [V1530nm, H1569nm] are different (where H and V refer to horizontal and vertical polarizations, respectively), which require two different grating periods. One simple way to generate polarization-entangled photon pairs is to place the two grating periods consecutively one after the other (Fig. 4a). After erasing “which path” information, there is ambiguity in whether the photon pair was produced in the first or second grating, which results in generation of the desired polarization-entangled state. In our work, we modify the poling pattern (using the phase-modulation technique) in the lithium niobate crystal to simultaneously phasematch both downconversion processes in the crystal (Fig. 4b). We observed high polarization-entanglement visibility using the phase-modulated SPDC crystal (Fig. 4c).