Our aim is to develop the metrology for control and manipulation of magnetic anisotropy in magnetic materials.  This includes development of the measurement science for quantification of the magnetic properties (e.g., magnetic anisotropy, magnetic exchange) and the structure-property-processing relationships underpinning the materials science.

We observe a magnetic behavior in magnetic nanoparticle dispersions which is distinct from the cubic magnetocrystalline anisotropy of the magnetic material (Fe3O4).  Instead, this distinct behavior has its origins in the magnetic interactions among the mobile nanoparticles within the colloid.

Specifically, we observed that the onset of a field-dependent colloidal uniaxial anisotropy coincides with chain formation parallel to the direction of the external magnetic field. At even higher fields, the onset of colloidal unidirectional and trigonal anisotropies occurs simultaneously with chain compression into columns and chain zippering (for close packing) perpendicular to the field direction. These anisotropies are distinct from the cubic magnetocrystalline anisotropy measured for bulk Fe3O4 because (a) there is no uniaxial, unidirectional, or trigonal anisotropy present in bulk magnetite; and (b) the measured colloidal uniaxial anisotropy is approximately 100-fold greater than the measured magnetocrystalline cubic anisotropy, which is approximately 4% that of the bulk value for magnetite. These observations suggest that field-induced changes of the physical structure of dilute magnetic colloids can lead to dramatic changes in their composite magnetic properties, presumably arising from competing magnetostatic and steric interactions. The results can be used to guide further development of models useful in many applications that utilize static and alternating magnetic fields, such as magnetic particle imaging, hyperthermia, in vitro assays, and shock absorption. Insights gained also provide new understanding to identify fundamental magnetic origins of the seemingly contradictory findings that magnetic nanoparticles in FFs exhibit anomalously large and small magnetocrystalline anisotropies, as compared to the bulk value, as well as unique magneto-physical properties, such as the asymmetric sound propagation observed in concentrated MR fluids, and the overestimation of the transverse magnetization in rotating MR colloids. 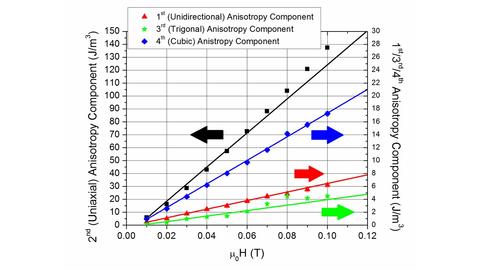 Figure: Colloidal anisotropy data obtained as a function of the (technologically relevant) field showing (black squares) the development of chains parallel to the field through the uniaxial (K2) component and the agglomeration perpendicular to the field through the unidirectional (K1) component (red triangles), the development of offset nanoparticles along the length of the chain through the trigonal (K3) component (green stars), and the cubic (K4, magnetocrystalline) component (blue diamonds). (All error bars shown, but may be smaller than the symbol, and represent 2σ.)

Insufficient characterization of bulk and microscopic properties (static and dynamic) of magnetic colloids has inhibited progress toward an understanding of these complex systems. This issue is particularly evident for in vivo medical applications which place high demands on material performance, such as heat generation (specific loss power or SLP) measurements for the cancer treatment hyperthermia.  To address this issue, we have investigated the variations in measured values of the SLP (as a function of alternating magnetic field amplitude) exhibited by nanoparticles demonstrating similar bulk magnetic and structural characteristics.  We found that a combination of intercore dipole interactions as well as variations in the internal magnetic (intracore) structure can account for these differences. Our results suggest a renewed examination of models and characterization methods is needed to advance magnetic colloids for various applications. 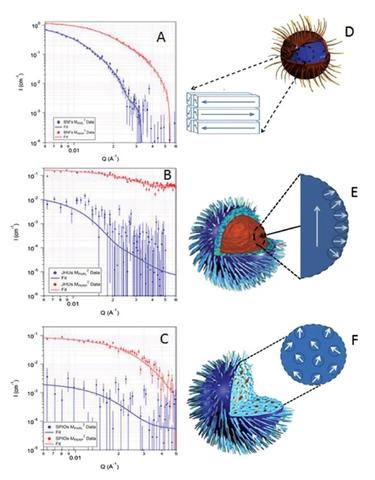 Figure: Magnetic scattering contributions, (blue) parallel and (red) perpendicular, to the guide field with respect to the polarized beam SANS data of: A) BNF; B) JHU; and, C) nanomag-D-spio (SPIO) nanoparticles in D2O at room temperature. The fit shown uses models described in the text and illustrated in schematic diagrams. Domain structures of: D) BNF; E) JHU; and, F) nanomag-D-spio particles obtained from analysis and modeling PASANS data. Error bars (1σ) may be smaller than the symbol.

For metrology, measurement reproducibility is critical.  We studied the reproducibility of measurements on a second-order gradiometer superconducting quantum interference device magnetometer of two different yttrium iron garnet (YIG) spheres, both having a diameter of 1 mm: 1) the National Institute of Standards and Technology magnetic moment standard reference material (SRM) and 2) a commercial sample. When the magnetic moment of the SRM was repeatedly measured as a function of rotation angle φ from 0° to 360°, we observed a sinusoidal variation in the measured values. The radial offset dependence of the observed magnetic moment was experimentally confirmed by the measurements of the commercial sphere placed in a hole in several cylindrical containers, wherein the distance between the center of the hole and the center of the container was r. The r-dependence of the minimum from each φ-dependent measurement series is qualitatively consistent with the theoretical curve. When the φ-dependent measurements for the SRM in a capsule were repeated 12× over 21 months, the relative standard deviation of the minimums improved up to 0.1%. Knowledge of these facts will be necessary for the accurate measurement of the magnetic moment of other sample forms (e.g., powders). 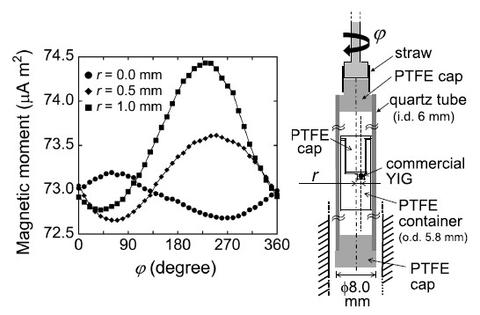 Figure: φ-dependences of the magnetic moment for the commercial YIG sphere in one of the custom PTFE containers at 298 K at an applied magnetic field of 397.89 kA/m. Each data point was measured three times in succession, and its typical relative standard deviation was 0.02%–0.005%.

[N. Matsumoto, C.L. Dennis, and R.D. Shull, “Improvement of Reproducibility of Magnetic Moment Detected by a SQUID Magnetometer Through Radial Offset Measurement on a YIG Sphere”, IEEE Transactions on Magnetics, 55 (2019) 9400305.]

Influence of Grain Constraint on the Magneto-Caloric Effect

We demonstrated that increasing the grain size to thickness ratio of Ni45Mn40Co5Sn10 ribbon samples by annealing heat treatments can decrease the magnetic field requirement for magnetic refrigeration by as much as 3 T under the annealing conditions studied. It is expected that the magnitude of field savings can be even larger with further grain growth. The average grain size increased with annealing time and temperature, which decreased the martensite transition temperature range due to reduction in the density of interfaces. The temperature transition range for the austenite, on the other hand, did not exhibit a significant trend. This improved the refrigeration capabilities of the Ni45Mn40Co5Sn10 by making the structural transformation between paramagnetic austenite and non-magnetic martensite more attainable with smaller fields. This decrease in the field requirement ultimately led to a larger magnetocaloric entropy change achieved under relatively smaller magnetic field levels. The giant inverse magnetocaloric effect of the optimized alloy was measured and showed that up to 25 J/(kg-K) was generated by driving the martensitic transition with magnetic fields up to 7 T. 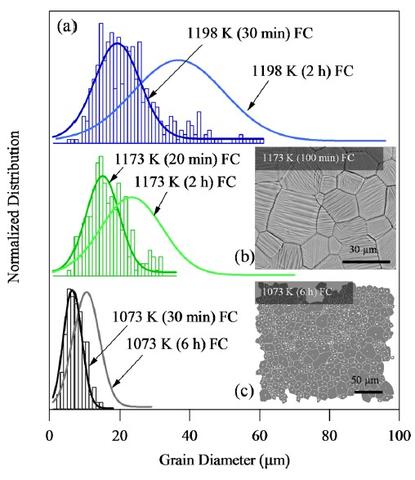 Figure: Normalized grain distributions for the minimum annealing durations and the corresponding fitted Gaussian curves for minimum and maximum annealing durations at 1198 K, 1173 K, and 1073K annealing temperatures in Ni45Mn40Co5Sn10 (a). The maximum of the fitted Gaussian peaks was interpreted as the average grain size for a given annealing treatment. An example backscattered electron micrograph for the 1173K 100 min annealing treatment followed by furnace cooling is shown in (b). Actual grain areas were computed by isolating the grains (c), and their size distribution was then plotted in (a). 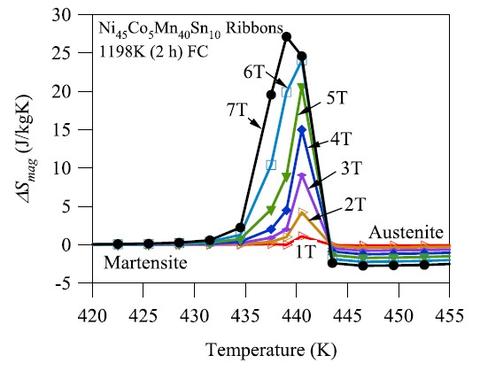 We have applied a new method for First Order Reversal Curve (FORC) analysis that is particularly well suited for the study of unpatterned films, because it does not require smoothing in field and therefore can resolve the very sharp structures due to domain wall motion that are typically seen in the FORC diagrams of unpatterned films. It also allows us to visualize the reversible and irreversible parts of the system together, without making an artificial distinction between reversible and low-coercivity materials. 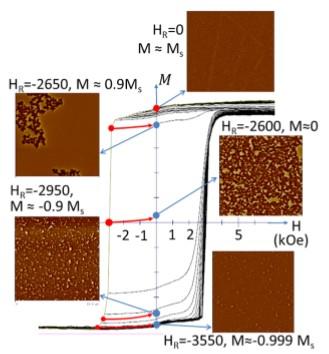 Figure: FORC curves of the CoPd alloy ﬁlm with the TaPd seed. The system was brought to each of the 5 red dots along the switching path (at a ﬁeld HR), and then brought to H=0 (blue dot) along the FORC (red curve). The blue arrow from the blue dot points to an inset 10×10μm2 MFM image at the blue dot (H=0).

With the aim of developing a new Fe-based alloy with good soft magnetic properties and/or ultrahigh strength, we examined the formation ability, thermal stability and properties of an amorphous phase in melt-spun Fe-rich Fe82-85B13-16Si1Cu1 alloys. The results obtained are summarized as follows:

The findings that the Fe-B-Si-Cu alloys exhibit good soft magnetic properties in both the annealed amorphous and amorphous + α-Fe phases as well as ultrahigh Vickers hardness values exceeding 1550 in the α-Fe+amorphous phase material are promising for further extension as improved soft magnetic and high strength materials having a simpler Fe-rich alloy composition.

An ultimate goal of spintronics is to control magnetism via electrical means. One promising way is to utilize a current-induced spin-orbit torque (SOT) originating from the strong spin-orbit coupling in heavy metals and their interfaces to switch a single perpendicularly magnetized ferromagnetic layer at room temperature. However, experimental realization of SOT switching to date requires an additional in-plane magnetic field, or other more complex measures, thus severely limiting its prospects. We demonstrate a novel structure consisting of two heavy metals (Pt/W/CoFeB/MgO and similar structures) that delivers competing spin currents of opposite spin indices. Instead of just canceling the pure spin current and the associated SOTs as one expects and corroborated by the widely accepted SOTs, such devices manifest the ability to switch the perpendicular CoFeB magnetization solely with an in-plane current without any magnetic field. Magnetic domain imaging reveals selective asymmetrical domain wall motion under a current. This discovery paves the way for the application of SOT in nonvolatile technologies, but also poses questions on the underlying mechanism of the commonly believed SOT-induced switching phenomenon. 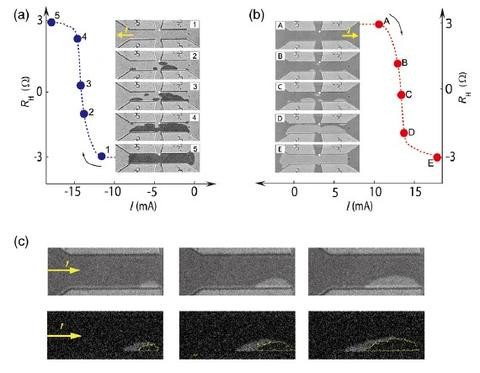